DeKalb County, GA — The DeKalb County Board of Commissioners and DeKalb School Board are going through the process of redrawing their district lines. A controversial proposal from State Sen. Emanuel Jones (SD-10) has caused some confusion and pushback.

Jones has proposed to remove the County Commission super districts continues to get the most attention, but the reasons for the proposed changes are vague. State legislators who spoke to Decaturish couldn’t provide a clear reason for the suggested change.

If the proposal was approved by the state legislature, it would be up to DeKalb County residents to approve the change in a referendum, state Rep. Viola Davis (D-Stone Mountain) said in a statement after contacting the General Assembly Office of Legislative Counsel.

The statement also says it would be too late for a vote to occur this year due to scheduling requirements for elections.

To read the Office of Legislative Counsel’s letter, click here.

Jones told the Atlanta Journal Constitution that it would be “better” for the county to have smaller districts with one commissioner. The makeup of the county’s government allows two super district commissioners to represent one-half of the county, effectively giving every constituent two representatives on the County Commission, the AJC notes. Jones insists he has no ulterior motive.

The county school district, however, does not have super-districts and has a map similar to what Jones is proposing.

DeKalb School Board Chair Vickie Turner said the school board should receive their district maps from the state’s Legislative and Congressional Reapportionment Office this week and will release those to the public.

The Board of Commissioners and School Board can make suggestions on their district maps, but the final decision ultimately lies with the Georgia General Assembly. The Georgia House of Representatives have not drawn their version of the maps yet, although they have started holding public hearings to gather community feedback.

Every 10 years, district lines are reapportioned, or reassigned, based upon data collected from the United States Census. This is similar to the process of redrawing the state legislative and Congressional districts, but at a local level.

“As it relates to DeKalb County, redistricting is a once in a decade conversation between the residents and the legislature to look at how our communities have changed since the last census,” DeKalb Board of Commissioners Presiding Officer Robert Patrick told Decaturish. “Recognizing that our population has grown, it is a time to ensure that both district and super district level boundaries and populations reflect equal representation. The challenge with redistricting is that there is a balance between numerically identical district populations and the need to preserve a community’s boundaries.”

He added that under the general and super district maps, there is an opportunity for the county to make sure each district has an equal number of residents while preserving the sense of community.

District lines were drawn with the least possible deviation using new population totals and following the recommendation of GIS and the Law Department, the newly proposed maps were unanimously approved by the DeKalb County Board of Commissioners and submitted to the Georgia General Assembly for review and consideration, according to a press release from DeKalb Commissioner Jeff Rader.

Each district ideally represented the same number of residents, but some deviation, or difference in population, is acceptable for state legislative or commission districts. It’s generally expected that the difference should be as low as possible, State Sen. Elena Parent (SD-42) explained.

Patrick said it’s important to remember that each commission casts one vote on any issue under consideration by the board.

The Maps and the state House of Representatives

The state’s Legislative and Congressional Reapportionment Office completed a technical review of the commission districts and super district maps and changed the maps slightly.

The map of the five commission districts the county approved had an overall difference between the five districts of 5.44% in terms of population. Patrick said, at a hearing with the DeKalb House delegation, that the districts were fairly similar concerning population.

To view the maps approved by the Board of Commissioners, click here.

The LCRO found several inconsistencies in the five-district map.

“County voting precincts were split for smaller numbers of people that can create a voter anonymity issue,” Patrick said. “Precincts split for zero population would still require that the county create a ballot combo even if there were no people living in that area. There were approximately 13 precincts split between districts and places where the geography jumped back and forth between sides of the road or other features.”

The LCRO also found some inconsistencies on the super district map, noting small splits of voting precincts and inconsistencies in map data, like jumping off a road and then back onto it.

After the changes, only two precincts in each map were split, which follows the current district lines where the split occurs, Patrick said.

He added that the technical changes from the LCRO are relatively minimal and maintain the cores of the districts from the current maps and those the county submitted.

The DeKalb House Delegation has not drawn any maps and is working off what the Board of Commissioners has presented to them, which is five districts and two super districts. The delegation is holding public hearings next week on the maps.

“I think it’s confusing today,” Rep. Mary Margaret Oliver (D-Decatur) said. “I’ve had a lot of complaints come to me in the last few days, or week, that there’s maps being circulated that have never seen the light of day or that they have not had an opportunity to comment on.”

She said she wonders what the maps are and who they came from and where the public is seeing them.

“I think we’re in a little bit of a state of confusion right now,” Oliver said. “Hopefully, whatever maps anybody has that they wish to produce or publish, I hope that they are in the process getting comments from the public.”

She leans toward maintaining the current structure of the County Commission.

“What I’ve been hearing is that people want the five and two consistent with what was created decades ago and what does not need to be changed in the dark of night,” Oliver said.

Senate Map of the DeKalb Board of Commissioners Districts

On Tuesday, Feb. 1, Rader walked on a resolution at the Committee of the Whole meeting supporting the General Assembly’s Legislative and Congressional Reapportionment Office’s recently approved district maps.

“My intent in advancing this resolution is to confirm the maps previously approved unanimously by the BOC and perfected by the LCRO,” Rader said in a press release. “The DeKalb Delegation to the General Assembly is ultimately responsible for a final map adopted through local legislation, and these maps make few changes from the current districts, primarily unifying cities within Districts. Changing the structure to eliminate Super Districts carries unforeseen consequences better considered through Charter Review.”

Jones unveiled his map on Thursday, Feb. 3, following an executive session with the DeKalb Senate Delegation, Sen. Parent (SD-42) said. She added there were no votes on the maps and the delegation will schedule public hearings.

In Jones’ proposed map, each commissioner would represent about 109,000 residents.

“Right now, DeKalb has seven commission districts [and] all have equal authority. Some districts are just larger than the others,” Jones said. “We didn’t change their responsibilities. The only thing we did was redistrict and reapportioned their districts.” 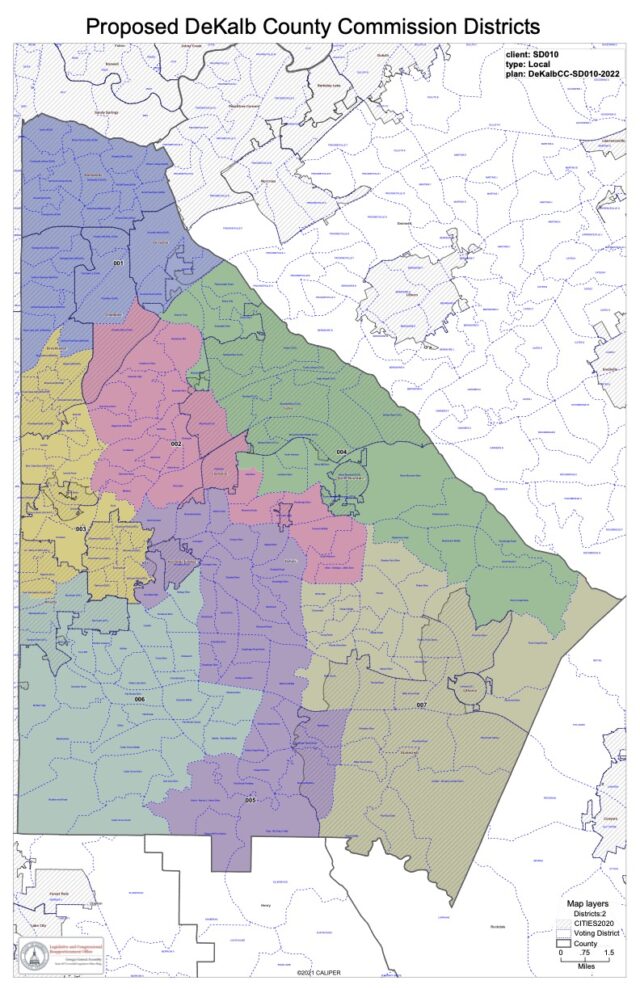 State Sen. Emanuel Jones (SD-10) has introduced a map of the DeKalb Board of Commisioners districts shifting to seven single-member districts. Photo courtesy of Daniel Coley.

The county has a population of over 760,000 people and the super districts have over 375,000 people represented by one person.

He said residents would be better served in smaller districts.

“DeKalb County has grown significantly over the past decade and is much more diverse than it’s ever been before,” Jones said. “This gives everybody an opportunity to be a lot closer to their representatives and participate in strong government.”

No sitting commissioner would be drawn out of their district or combined in the same district. He said he’s gotten some favorable responses from the community regarding the seven districts.

Jones has represented DeKalb County for 18 years and said he has rarely met one of the super commissioners. If a constituent in the county contacted Jones with an issue, he would contact Commissioner Larry Johnson. Most Johnson’s district is in Jones’ senate district.

“He’s always been the person who represented that district, so I’m not really sure what the other commissioner that’s representing that same district, what their responsibilities were,” Jones said.

Under the current structure, if the commissioner and the super commissioner don’t agree on a zoning issue, it does not move forward.

“It does create another level of efficiency within county government,” Jones said. “I didn’t think it was going to be controversial.”

This issue has been talked about for a while due inefficiencies in the county, he added.

Sen. Parent (SD-42) said she is looking forward to the public hearings to see what residents think.

“We’re supposed to be having a charter review commission for the entire Organizational Act here in DeKalb. I really think it should be studied as part of that process,” Parent said.

The supporters of the current super districts argue that those changes should be considered as part of reviewing DeKalb County’s charter. Charters are essentially the constitutions of cities and county governments. They define their powers and responsibilities, and also establish their forms of government.

DeKalb Commissioner Lorraine Cochran-Johnson supports the LCRO approved maps as well and is not opposed to redrawing the district lines.

“I expect the people of DeKalb to speak to their desires as it relates to super districts and their utility,” Cochran-Johnson said in a press release. “Personally, I feel it is good to have two Commissioners residents can contact regarding county related issues. It creates dialogue and sometimes a new and/or different perspective. My only concern is the ability to engage the people of DeKalb on an alternative district plan when no formal maps eliminating super districts have been presented at this time.”

DeKalb County residents who wish to provide feedback on the maps can participate in future public hearings or contact their representative.

The DeKalb House Delegation will host public hearings on the maps on Tuesday, Feb. 8, at 6:30 p.m. via Zoom and Wednesday, Feb. 9, at noon on Facebook Live.

The DeKalb Board of Commissioners is also expected to discuss the LCRO maps on Tuesday, Feb. 8 during their meeting, which starts at 9 a.m. via Zoom and DCTV.