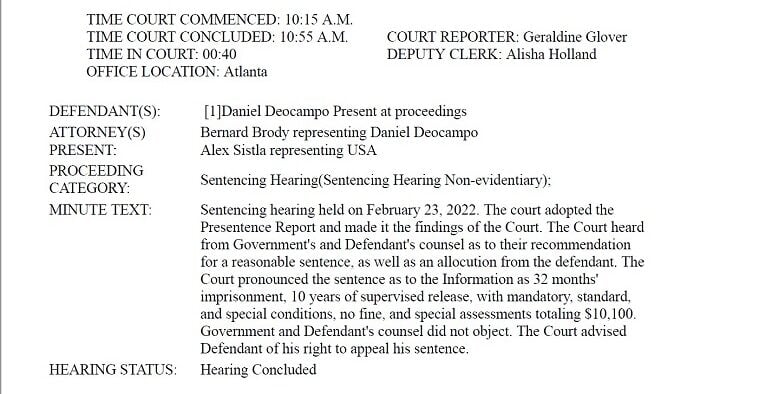 A transcript of the sentencing hearing for Daniel Deocampo. Image obtained via Pacer
Share

Avondale Estates, GA — An Avondale Estates Man has been sentenced to 32 months in prison after pleading guilty to possessing more than 4,000 child sexual abuse images.

He will have 10 years of supervised release when his prison sentence is over.

According to the U.S. Attorney’s Office, former Georgia State University professor and dean Daniel Deocampo on possessed images of children as young as five being sexually abused. He pleaded guilty to the charges on Nov. 3 and was sentenced on Feb. 23.

GSU’s Cyber Security Department first notified the FBI that an employee was visiting websites that appeared to contain child abuse images. He was using the university’s network to visit the sites.

“On January 6, 2021, the FBI executed search warrants at Deocampo’s residence, as well as his GSU office and lab space. As a result of the search, agents recovered an Apple laptop belonging to Deocampo that contained more than 4,000 files of child pornography, including approximately 190 videos,” the U.S. Attorney’s Office said.

According to the sentencing memorandum filed in his case, Deocampo potentially faced a lengthier incarceration of 78 to 97 months. However, his attorney successfully argued that Deocampo presented a low risk of offending again, was remorseful for his actions and took responsibility for them.

His attorney noted that Deocampo is an “internationally renowned” geologist and geochemist with a lengthy record of community service. He’s advocated on behalf of the homeless and advocated for awareness for various causes. He also contributed to the fight against the COVID-19 pandemic, his attorney said. He produced testing swabs with a 3-D printer that were just as effective as ones being produced by the medical community.

But Deocampo was also engaging in “compulsive pornography use that he has made many attempts to put a stop to,” the sentencing memorandum says. The viewing of pornography began in college with “mainstream” adult sites that “later progressed to the use of subscription services where he began to encounter underage pornography.”

“When he went online, he tried desperately not to seek out child pornography, but he often found that he could not stop himself and would then find himself viewing videos and photos of underage children,” the sentencing memorandum says. “He found a lot of these images to be disturbing and repulsive and he can’t quite understand why he didn’t immediately get rid of them.”

His attorney said Deocampo would go through cycles where he’d cancel subscriptions only to start them again a few months later.

“Dan would often go to church and pray about his addiction, although he admits that he never sought professional help or confided in his clergy,” the sentencing memorandum says.

His attorney argued that Deocampo never shared, traded or distributed the thousands of images he downloaded.

“From the outset of this case, Dan has always been honest and forthcoming about his conduct,” the sentencing memorandum says. “Shortly after the execution of the search warrants, he communicated with the Government, through counsel, his intention of accepting responsibility for the offense and entering a guilty plea. He has expressed deep and genuine remorse for his conduct.”

Under the terms of his supervised release, Deocampo must register as a sex offender.

“Deocampo was caught brazenly using the university network to exploit children,” said Acting U.S. Attorney Kurt R. Erskine in a press release. “It is disturbing when we learn that an educator engages in this type of disgusting behavior.  Possessing child pornography victimizes and abuses the children in the images each time they are disseminated.”