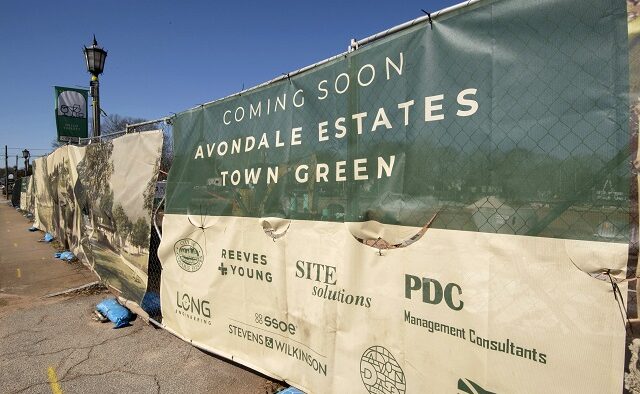 Avondale Estates, GA — The city of Avondale Estates received a proposal from Reeves Young to construct the market pavilion portion of the town green project.

The Avondale Estates City Commission recently passed a resolution allowing the city manager to execute a change order with Reeves Young, who is constructing the town green, to include building the pavilion and the cost could not exceed $850,000.

At the Feb. 23 City Commission work session, City Manager Patrick Bryant said the city received the change order, and it came in at a price of $805,000. Since the board was supportive of the change order, Bryant will execute it today, so construction can begin.

The city broke ground on the project in June 2021.

At the Sept. 22 City Commission meeting, Jerry Miller, founder and principal of Fabric Developers, presented plans for a two-part commercial development. One area will be a multi-use market pavilion.

The commercial development is still in the negotiation stage, a spokesperson for the city said. The development will be paid for through public and private financing.

“What we’re doing here is not something that a private developer would do on his own. It’s more expensive. There’s a good deal of public involvement in it. It’s a true public-private partnership,” Fabric Developers Founder and Principal Jerry Miller previously said. “So we have proposed a structure that provides for [Fabric’s] contribution of 20% of the capital in equity, raising another 40% in private debt, and then using DDA subordinated debt for about 40% of the project. So that’s about $3.2 million, for a total cost of $8.154 [million].”

In November 2021, the city commission approved a contract with Fabric Developers for an amount not to exceed $92,000 in order to design the pavilion. At the Jan. 26, 2022, Stevens and Wilkinson, the firm designing the project, presented the construction drawings for the market pavilion to the city commission.

– The city provided an update about hiring the new police chief. The Georgia Association of Chiefs of Police has invited nine candidates to participate in the one-day assessment. Seven of the nine candidates accepted the invitation and will go through the process on March 2. City Manager Patrick Bryant said the two people who removed their names from consideration were candidates from out of state.

The GACP anticipates completing the scoring of the assessments by March 10 and will set up a meeting with Bryant a week after that to discuss the candidates they recommend moving forward to the interview phase.

– The City Commission recently began a discussion about gas-powered leaf blowers and whether the city should limit or ban their use.

Mayor Jonathan Elmore suggested the city hold off on deciding. A bill has been introduced in the Georgia General Assembly that would prohibit counties or cities from treating gas-powered leaf blowers differently than electric leaf blowers, according to the Atlanta Journal-Constitution.

“Given that this is getting tossed around at the Capitol, I think it would be best for us if we would shelve this discussion until they sort this out, primarily because I don’t want our discussions to be used as fodder in any way for pro or against by any legislator on that particular law,” Elmore said. “If they pass that law, we can’t do anything anyway. If they don’t pass the law, then we can discuss it again.”