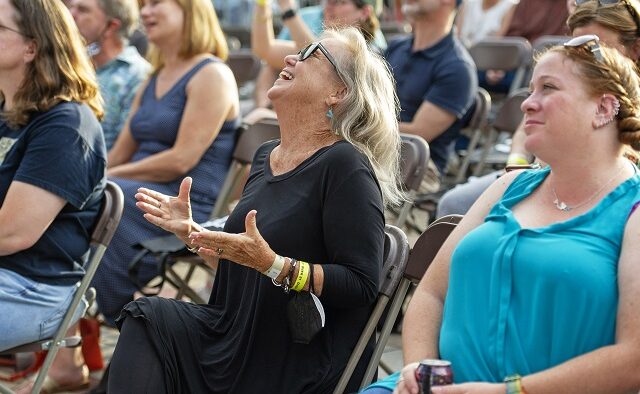 The festival will take place in the Decatur Square on Saturday, April 23.

Here is the full announcement from Amplify:

The Saturday festival will also feature S.G. Goodman and the Mike Killeen Band. Tickets are $75 for general admission, $195 for VIP, and $275 for premium VIP.

Amplify Decatur will also feature a series of events in and around the downtown Decatur Square on Friday, April 22 and a show at Eddie’s Attic on the evening of Sunday, April 24. Artists will be announced in the coming weeks.

Amplify Decatur is presented by Lenz and produced in partnership with Eddie’s Attic. All proceeds will be directed to Decatur Cooperative Ministry (DCM) to aid their efforts to prevent and alleviate homelessness in Decatur and DeKalb County. The 2021 festival weekend was held in October and featured Indigo Girls, John Paul White, Rodney Crowell, Blind Boys of Alabama, and Michelle Malone, and raised $50,000 for DCM.

“We’re excited about this incredible group of performers, and the opportunity to continue to support Decatur Cooperative Ministry’s vital work in our community,” said Drew Robinson, president of the Amplify My Community board. “We are eternally grateful to the city of Decatur, Eddie’s Attic, and so many incredible sponsors, especially Lenz, for making our community stronger through the power of live music.”

Amplify is working with the City of Decatur to develop a plan that will ensure public safety and a healthy environment.

Beginning with his 1993 major label debut, “Welcome to the Cruel World,” Ben Harper has offered listeners what Rolling Stone magazine called the “jewels of unique and exquisitely tender rock & roll.” He has sold more than 15 million records, is a three-time Grammy Award winner, and has been nominated seven times. His highly acclaimed songs include “Diamonds on the Inside,” “Steal My Kisses,” and “Burn One Down.” He has collaborated with Blind Boys of Alabama and Charlie Musselwhite, and produced records by Natalie Maines and Rickie Lee Jones, among others. Known for his social activism, Harper has supported a broad array of organizations and events, including LIFT, Living Lands and Waters, Moveon.org, Newlight, Pat Tillman Foundation, Plastic Pollution Coalition, and others. In 2020, he released his first instrumental record, “Winter is for Lovers.”

Old Crow Medicine Show got their start busking on street corners in 1998, from New York state and up through Canada, winning audiences along the way with their boundless energy and spirit. They eventually found themselves in Boone, North Carolina where they caught the attention of folk icon Doc Watson while playing in front of a pharmacy. He invited the band to play at his festival, MerleFest, and the rest is history. It’s been over 20 years since these humble beginnings. The band has gone on to receive the honor of being inducted as members of the Grand Ole Opry, and have won two Grammy Awards: Best Folk Album for “Remedy” (2014) and Best Long Form Music Video for “Big Easy Express” (2013). Additionally, their classic single, “Wagon Wheel,” received the RIAA’s Double-Platinum certification in 2019 for selling over 2,000,000 copies, while the band’s debut album “O.C.M.S.” has been certified Gold (500,000 copies). The band’s latest release is “Live At The Ryman” (2019), which was released on Columbia via The Orchard. Old Crow Medicine Show’s latest endeavor was the Hartland Hootenanny, a variety show hosted on YouTube that featured music, storytelling, special guests, socially distanced square dancing, and more.

2020 was not quite what Jay Farrar was expecting for the 25th anniversary of Son Volt, the band he started in 1995 after leaving the seminal group Uncle Tupelo, whose “No Depression” album helped define the alt-country and Americana genre. The group had just finished an Outlaw Country Cruise when the pandemic hit and sent them into their homes on lockdown.

Instead of a triumphant tour marking the illustrious landmark, Farrar was forced indoors by the pandemic, and his “Reverie” during that time helped define “Electro Melodier,” Son Volt’s 10th studio album – and third for influential Nashville indie Thirty Tigers. The title, taken from the names of two vintage amplifiers from the late ‘40s and early ‘50s, also describes the disc’s unique blend of folk, country, blues, soul, and rock – an electric troubadour with melodies that hit and stick. Social protest songs like “Living in the U.S.A.” and “The Globe,” the former about the promises of this nation gone wrong, the latter referencing the street protests accompanying the Black Lives Matter movement, exist side by side with odes to long-term relationships (specifically his 25-year marriage) in “Diamonds and Cigarettes” and “Lucky Ones.”

The War and Treaty

Since forming in 2014, The War and Treaty have amassed a following as eclectic as their sound itself, a bluesy fusion of Southern soul, gospel, country, and rock ‘n’ roll. Known for a live show with nearly revival-like intensity, the husband-and-wife team of Michael Trotter, Jr. and Tanya Blount-Trotter endlessly create an exhilarating exchange of energy with their audience, a dynamic they’ve brought to the stage in opening for the legendary Al Green and touring with the likes of Brandi Carlisle and Jason Isbell. So, when it came time to choose a title for their forthcoming sophomore album, The War and Treaty quickly landed on “Hearts Town” – the Nashville duo’s adoring nickname for their ardently devoted fanbase.

Kentucky singer-songwriter S.G. Goodman blends the sounds of traditional country and folk with moody electric grit and progressive ideas. She is brutally honest when shedding the layers addressing the social and economic complexities of living in the rural South, but does it with the grace of someone who respects the land and the people whose stories she’s absorbed along the way. Her debut album, “Old Time Feeling,” was co-produced by Jim James of My Morning Jacket and she was included on NPR’s 2021 Artists to Watch list.