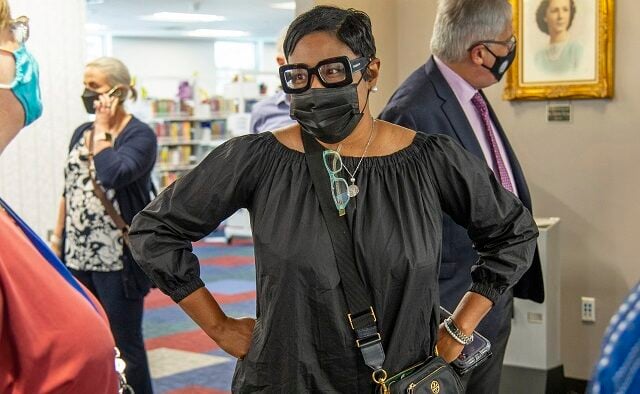 DeKalb County Super District 7 Commissioner Lorraine Cochran-Johnson talks with people during a rededication ceremony for the Stone Mountain-Sue Kellogg Library on Aug. 5. Speaking during the event, Cochran-Johnson committed to allocating the necessary funds for the installation of a gazebo along with an edible environment at the library. Photo by Dean Hesse.
Share

She introduced the ordinance at the Feb. 22 County Commission meeting.

“As a commissioner, I am tasked with protecting the health, welfare and safety of DeKalb’s residents and visitors,” Cochran-Johnson said in a press release. “I believe this mandatory ordinance will assist our police officers and public safety staff in carrying out that protection.”

A high-risk business means a business that has been designated as a high risk by the county’s police chief. To be deemed high-risk, the business would have to call for police service more than three times within 30 consecutive days. A high-risk business could also be a retail establishment where serious crimes such as murder, felony murder, aggravated assault, kidnapping, armed robbery, rape, child molestation, aggravated sodomy, aggravated sexual battery, or any felony possession or possession with intent to distribute controlled substances in violation of Georgia or federal law have occurred, according to the press release.

“Over the last few months DeKalb has seen a slight uptick in homicides at local gas stations,” Commissioner Cochran-Johnson said in the press release. “The DeKalb County Police Department has enacted a plan to address this issue through measures such as increased patrols and assigning additional detectives. It is my hope that footage from the video surveillance systems will be a valuable tool to aid them and deter crime, so we can be swift in the apprehension of criminals.”

Under the terms of the ordinance, business owners would be required to:

– Maintain a video surveillance system in proper working order at all times, including outside business hours.

– Monitor a minimum of 75 feet of building exterior and all gas pumps through a video surveillance system.

– Meet a minimum technological standard of 4 MB of storage as established in the article.

·- Submit an affidavit, after the initial inspection, with each application for a renewal of their business license that the video surveillance systems is operational and in full compliance.

– Display an approval notice and notice at the gas pump or building exterior informing the public that the premises are monitored by a video surveillance system.

“We are cracking down on crime in DeKalb,” Commissioner Cochran-Johnson said in the press release. “This ordinance will engage our local businesses in supporting us in this effort.”