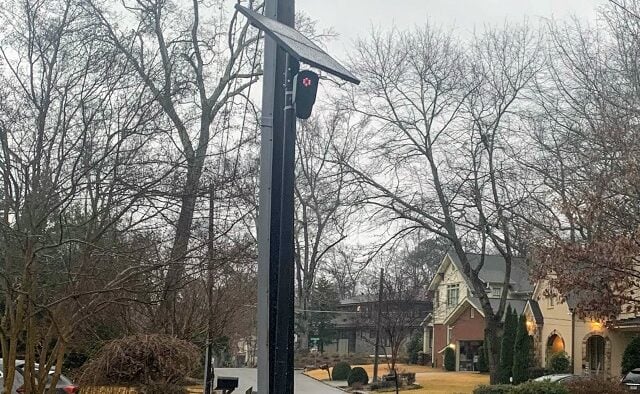 Editor’s note: The city of Decatur has provided a response and it appears beneath this letter.

A couple of weeks ago, I came home from work to find a surveillance camera installed on our property. We were never notified about the camera’s installation, and there is no signage identifying who the camera belongs to. After several calls to city officials, we learned this camera is an Automated License Plate Reader (ALPR) installed by a private company, called Flock Safety, at the request of the City of Decatur Police Department.

I was told that the camera was installed in response to concerns from residents following three shooting incidents in Oakhurst in 2021, two of which were on my street but several blocks away. Concerned residents, wanting more follow-up and communication from police, requested a meeting with police in November 2021. ALPR cameras were discussed at that meeting, but residents did not ask for them. There was no further community input on ALPR cameras following the meeting.

ALPRs take a picture of every license plate that passes by it, then runs the plate against a national database. These cameras can be triggered by speed and noise. Although the police department told me the camera only takes snapshots of license plates, this technology definitely can record and search for other identifying information—bumper stickers, dings in cars, people on bikes, pedestrians.

You may be thinking—I’m not wanted by the law, so why would I care if my license plate is being photographed? Let me give you a few examples of how this can be problematic. This is pretty powerful technology that In the aggregate can capture important information about you and your comings and goings. This data can be shared with other state and national law enforcement agencies, and often with little oversight. On more than one occasion, ALPRs have been used to share data with ICE. In New York, this technology was used to determine who attended services at a local mosque. Can you think of other ways this technology could be misused? Women leaving a clinic? Documenting who attended a BLM protest?

I’m not particularly interested in surveillance technology, but the sudden installation of a camera on my property led me down a bit of a rabbit hole, and I think it’s important to share what I’ve learned. There is currently minimal regulation regarding ALPRs, and private companies like Flock Safety are operating in the wild west of AI technology. Do you remember when Amazon sold only books? I believe we are looking at Flock Safety at a similar place in time. A relative new-comer in the ALPR market, Flock is offering its product cheaper and better than its competitors. Flock makes agreements with local police departments to install their ALPR cameras, and because there are minimal or no local laws regarding surveillance technology, Flock Safety often has installed the cameras before elected officials even know the right questions to ask. And even if there are objections, by that time the cameras have already been installed.

So picture our future: someone drives past an ALPR in Georgia and the facial recognition technology picks up a match from a hot list in Texas, alerting police of their exact GPS location. Does this make you feel safe? Terrified? How you answer that question probably depends on many factors, including, but not limited to, your income, color of your skin, and previous interactions with law enforcement.

And while ALPRs may make some people feel safe, they have not been proven to reduce or prevent crime. They have, however, been shown to disproportionately impact low-income earners, immigrants, and Black people. Even if you may not feel particularly uncomfortable by these cameras in your neighborhood, there are other people who live and work in our community who might feel differently, and have very legitimate reasons for feeling that way.

I absolutely value safety in my community, and I have a tremendous amount of respect for the men and women in our police department. But I am struggling to balance this with some very real privacy concerns. ALPRs are a powerful technology that should only be used with transparency, input from the community, and clear policies in place on how the technology can be used. Using ALPRs in any community requires a whole set of unique regulations specific to their use. If these are not put in place before ALPRs have been installed (and after community buy-in), we are in danger of this technology being misused in ways that harm our community.

Do we really want mass, indiscriminate surveillance in our neighborhoods? Is this the best solution for decreasing crime in Decatur? We should have the opportunity to give input on how, or even whether, to use ALPRs in our city. We need transparency from our mayor about the current use and future plan for ALPRs in the City of Decatur. Police departments are not the customers of companies like Flock Safety; communities are. It is, after all, our data that is feeding Flock Safety’s network of ALPRs.

Here is a response to this letter provided by Decatur City Manager Andrea Arnold:

In November 2021, city staff and elected officials met with a group of concerned residents of Fayetteville Road about recent criminal acts involving the discharge of firearms on and near Fayetteville Road.  Among a number of strategies identified to address these crimes was the commitment to consider the installation of automated license plate readers (ALPR).  In early December, interim Police Chief Scott Richards notified representatives from the resident group that the city had ordered two ALPRs to be installed on Fayetteville Road.  The ALPR device in question was installed within the public right of way, not private property.  Another ALPR device will be installed in the public right of way at East Lake Drive and Fayetteville Road.

The ALPR device is not a surveillance camera and does not have video recording capabilities.  Rather, it captures a still image of the rear of a vehicle and its license plate.  The device does not capture images of drivers or passengers.  The license plate number is processed through a national database to determine if the vehicle is stolen, associated with a crime, a missing or wanted person, etc.  The still images are purged every 30 days.  The data collected by the system are not sold nor shared with any third party and are stored in a Criminal Justice Information Services (CJIS) certified environment requiring maximum security clearance for access.  The device on Fayetteville Road and at four other locations throughout the city are portable and may be moved to other locations in the city as needed.

The City’s Criminal Investigation Division is authorized to use the system when a crime occurs and there is a known vehicle associated with the crime.  The search must be justified, supplied with a case number and an audit trail is created.  ALPR devices are one tool available to law enforcement to deter and solve crimes, and ultimately, to protect our community.  Just in 2021, the ALPR devices assisted the Police department in solving multiple crimes including a carjacking, rape, armed robbery and assault.  Residents that may have additional questions can reach out to me at [email protected].