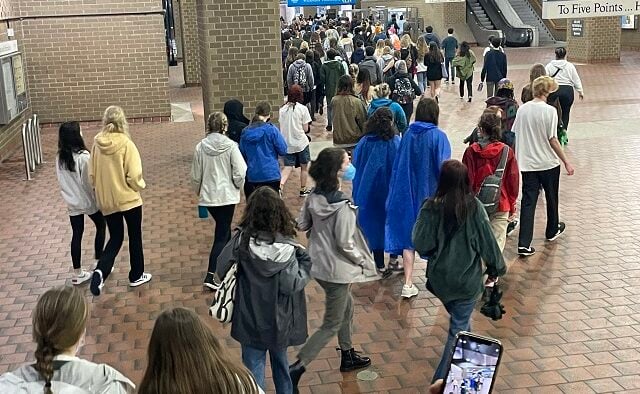 Decatur High students on Friday, Feb. 25, joined a protest organized by Hands Off Georgia against bills that would ban the teaching of "critical race theory" in public schools.  Photo by Dean Hesse
Share

Decatur, GA — Decatur High students on Friday, Feb. 25, organized a protest as the newly formed group Hands Off Georgia to rally against bills that would ban the teaching of “divisive” concepts in public schools.

The protest is being held at Liberty Plaza near the Capitol. Photographer Dean Hesse is documenting the protest for Decaturish.

“Students across metro Atlanta are organizing in opposition to HB 1084 and SB 377, in particular, which are currently being considered by the General Assembly,” a press release says. “These bills seek to ban critical race theory in public classrooms, which would seriously damage students’ access to education. The students expect support at the protest from other high schools and colleges, as well as adults.”

While the bills have been touted as banning “critical race theory,” they actually ban “divisive” concepts from being taught in schools. Banned concepts would include claims that the United States is “fundamentally or systematically racist,” that any people, are “inherently racist or oppressive, whether consciously or unconsciously,” according to Georgia Public Broadcasting. 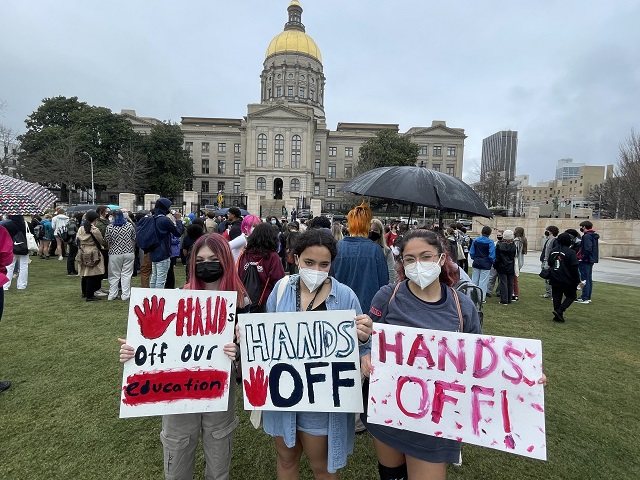 Decatur High students participating in the protest left school for the day. The school’s principal sent a letter to parents saying the event is not sponsored by the school and any student absence would be unexcused as per City Schools of Decatur’s policies.

But the Decatur School Board has publicly come out against the bills.

“Fortunately, neither CRT nor any other academically-rigorous approach to studying race, ethnicity, creed, color, or national origin involves compelled thought, speech, promotion, or activity,” the School Board said in its letter criticizing the legislation. “Georgians deserve legislation that doesn’t have its roots in disinformation, and Georgians deserve better than copy-and-paste legislation handed to them by Washington, D.C. ‘think tanks’ that don’t know Georgians’ needs.”

If enacted, CSD warns that these bills would harm students by limiting the schools’ ability to begin and sustain the work of addressing equity. The bills would scare educators into avoiding these subjects, or they could be accused of compelling a student or colleague’s belief or action.

“However, not having these discussions perpetuates harm to students who feel unseen, unheard, and unvalued,” the School Board said. “These bills would deny those students the caring adult support to examine past and present actions that have marginalized them or people who share their background or experience.”

Students behind the protest moved with urgency, knowing the bills may soon become state law.

“Within the next few weeks, a series of bills will attempt to be passed by Georgia Representatives,” the students said in a statement. “Because it is an election year, we recognize that these bills have the ability to pass with flying colors – that is why we, as student activists, plan to take action. One of these bills includes HB1084, which aims to ban all aspects of critical race theory, including all mention of the United States as a systemically racist institution. This legislation explicitly censors the ability to talk about and teach issues many students of all races feel are vital to creating a just world.”

“If this bill is passed, it will cripple schools’ freedom to educate their students on important topics such as race, paralyze students’ rights to privacy, and cut public school funding by up to 20% if schools are caught teaching students about race. We cannot simply ignore the histories of our students of color. Just as we are constantly taught White history, we must normalize talking about the experiences and the histories of all of our students. If we fail to do so, we are only promoting a breeding ground for division, ignorance and hatred.”