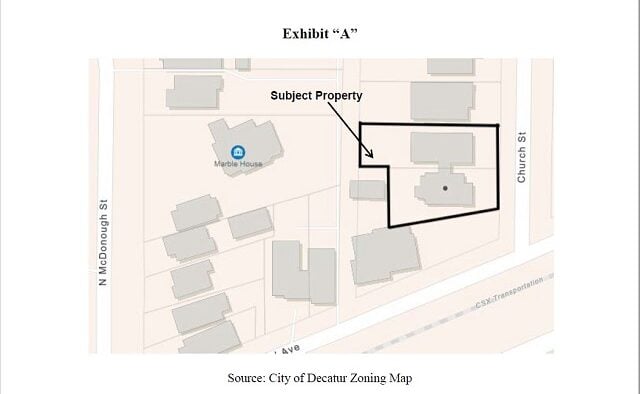 A design drawing showing the location of the parcel at 104-108 Church Street. Credit: City of Decatur.
Share

Decatur, GA — The Decatur Planning Commission voted unanimously Tuesday to recommend approval of a special exception to the city’s parking standards in the Downtown Special Pedestrian Area for the property at 104 and 108 Church Street.

The exceptions will allow for the construction of a film editing studio at that location.

The adjoining lots were combined into one parcel at some point in the past and are currently occupied by a single structure that is in poor condition, architect Andrew Rutledge said during the meeting.

The property owner wants to build a new commercial building that will house the film editing studio. To provide the minimum required parking spaces under the city’s zoning regulations, they want to construct a small 11-space parking lot beside the structure, perpendicular to the street.

Instead of maintaining the 60-foot setback required for surface parking lots inside the Special Pedestrian Area, the owner is requesting an exception to allow their lot to have a 40-foot setback from Church Street.

Two other properties on the same block of Church Street currently have surface parking lots immediately adjacent to the street that were constructed before the current zoning standard.

“Unlike the other lots, our lot would still have a landscape buffer between the lot and the street,” Rutledge said.

During the discussion, planning commission members said they felt the application was consistent with neighboring commercial properties and with the intent of the regulations governing the pedestrian area.

“The way the building design standards are written, it is clearly to invite a connection between the sidewalk and pedestrian area businesses unobstructed by vehicle parking,” Planning Commissioner Greg Chilik said. “This design reflects the spirit of that in that there is nothing between the doors of the business and the sidewalk.”

Planning Commission Vice Chair Mike Travis asked whether the plans would adversely affect any street trees or the sidewalk at the front of the property.

To connect the new building to the sewer line, one tree might need to be moved or removed, and a replacement planted according to the city’s requirements, Rutledge said. Other than that, the public sidewalk would be returned to the condition it is currently.

The application will now be considered for final approval by the Decatur City Commission at its next meeting on Tuesday, February 22.