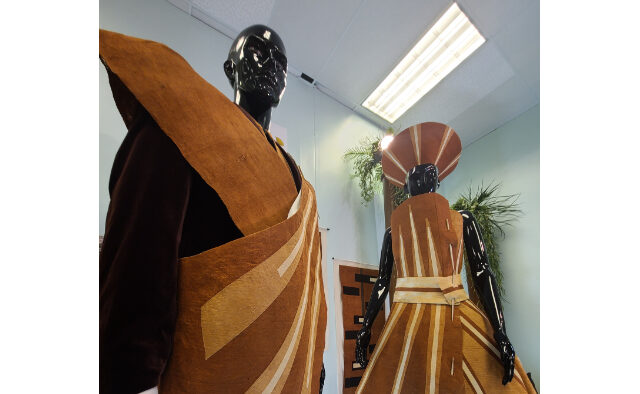 Let me tell you about New Black Wall Street in Stonecrest.

No, wait. Let me tell you about Ugandan bark cloth first.

But before that, let me tell you about my Dungeons and Dragons game.

Digressions upon digressions. I am exercising a privilege today. Once, only. I am perfectly aware that, unless you’re Matt Mercer from Critical Role, hearing about someone else’s D&D game is right up there with listening to someone describe their last round of golf or fishing trip.

It’s relevant. Trust me. Let us nerd together.

When I am not writing about politicians or people getting shot, I am almost certainly adding to the worldbuilding for my in-house Dungeons & Dragons campaign, set in a fantasy quasi-13th century Africa. Think Wakanda meets Game of Thrones. The Akamara campaign imagines what Africa’s development might have looked like if some of the continent’s physical and economic impediments had not made things more difficult. A magical tweak here or there and the “Guns, Germs and Steel” problems of malaria and sleeping sickness, crop species propagation and population concentration disappear.

I’ve been writing this as an obsession for the last three years or so. It’s an anxiety reaction to all the other writing I need to do to make a living. But I also want Black nerds like myself to better see themselves in the heroes they play. But it’s also to help everyone see that there are some really excellent, universally applicable Dungeons and Dragons stories in African folklore that have long gone ignored because almost no one in D&D’s racially blinkered production history has bothered looking.

You don’t have to be Black to appreciate the role-playing possibilities of the abatwa — miniscule hunters of Zulu folklore who ride ants and are extremely sensitive about their height. If they take offense, they’ll shoot you with their poisoned arrows … and you will die.

Or the egbere of Nigeria, which you might think of as a forest gnome or leprechaun. It carries a mat around to sleep on. If you steal the mat, you will gain riches … but the egbere – a fairy that can’t be killed by normal means – will follow you around wailing at the top of its lungs all day and all night until it gets its mat back.

Undead are, frankly, not scary enough because everyone has had a good look at the standard array of skeletons and zombies working up the chain to vampires and liches. But no one here knows what a Malagasy kinoly is.

The idea that a man, on horseback, wearing chain mail and a shield using a sword was perfectly normal in 14th century Ghana seems to have escaped role-playing writers. (Spears are better weapons, but set that aside for a moment.) The utility of canoes as a weapon of war, the establishment of the University of Sankore in Timbuktu in the 14th century, the tower shields of the Ethiopian empire, the shotel sword designed to curve around those shields … the deeper I’ve dug, the more interesting stuff emerges. The idea here isn’t some implied orientalist mystical othering, nor some hint at a suppressed black superiority. It’s equality. The stories are equally interesting. And everyone should experience them.

Someday I will publish this campaign. I promise. It’s a 200-page book with two thousand pages of supplementary research sitting on my hard drive, right now. But it’s not ready. Stupidly, I insist on a game economy that makes sense. To that end, I have occasionally gone to absurd lengths looking for more background information on 13th century African folklore and culture. I’ve consulted the faculty at Harvard, UCLA and Berkeley, traded e-mail with historians in Rwanda and Nigeria and been one of the 30 people reading people’s graduate thesis papers on obscure topics. I have blown deadlines – I am, in fact, blowing one right now –building spreadsheets modeling the production of iron weapons and crop yields … and textiles.

I found myself at the New Black Wall Street market a few weeks ago waiting for the family Civic to get fixed. Things were dead that day. Food was a rumor; I ended up with an ice cream cone. And then I stumbled into the African Textiles Museum. The nerding was on.

I had never felt authentic raffia cloth. It’s a bit like someone wove nylon fishing line into a dress. Kente is marvelous. But I had never touched bark cloth before, and they didn’t have any. But as it happened, a delegation from Uganda, including the Ugandan ambassador, had planned an event at the museum in a few weeks, and they were bringing bark cloth with them.

Bark cloth is made in southern Uganda by the Baganda tribe. It’s peeled from Mutuba trees and pounded flat over a period of weeks by local craftsmen. Witches and spiritual mediums wear it, as do the royal families of Ugandan nobility. Bark cloth is the burial cloth for Ugandan dead. And the production process hasn’t changed in 1,000 years.

It is Dungeons and Dragons stuff. I pledged to return.

New Black Wall Street has been under some fire for the last few weeks. Vendors have been complaining about leaks in the roof damaging their wares, and that the owner of the marketplace has been less than accommodating. When you read a quote in the AJC like “They’re going to burn themselves down … It’s just a matter of time,” you start to wonder what’s going on.

I’ve been skeptical of the market in the past. New Black Wall Street is conceived as a place for Black-owned businesses to thrive. But at heart, it’s still a mall with extra steps. It contends with the same economic problem that every other mall in America faces in an age of online retail – extra overhead for a brick-and-mortar facility. Artificially undercapitalized businesses trying to sell into an artificially underpaid market segment is one reason Black entrepreneurial efforts haven’t yet been able to even the economic playing field with white America. Add to that the market’s connection to the administration of disgraced former Stonecrest mayor Jason Lary, and worries about its future arise.

After visiting again Saturday, I think I can safely say Stonecrest understood the assignment.

The market was packed to its wet rafters. I had trouble finding a parking spot. It’s no wonder to me that the owner, Bill Allen, might have felt no competitive pressure to address vendors’ concerns. I’d bet there were more people at New Black Wall Street on Saturday than the gigantic Stonecrest Mall next door.

Black History Month programming helped. Lou Gossett Jr. was visiting, as were other television stars. A comedy club set performed at the market’s main stage. Performers dressed for Mardi Gras – or, really, Carnival in Rio – paraded through the halls. The Ugandan delegation’s arrival was almost incidental.

I hung out for a bit with Stonecrest city councilman George Turner. “I think everyone wanted to come out and see if there was a problem themselves,” he said. “We’re all rooting for this place.