George on Georgia – DeKalb’s winter of discontent about warming centers

George on Georgia – DeKalb’s winter of discontent about warming centers 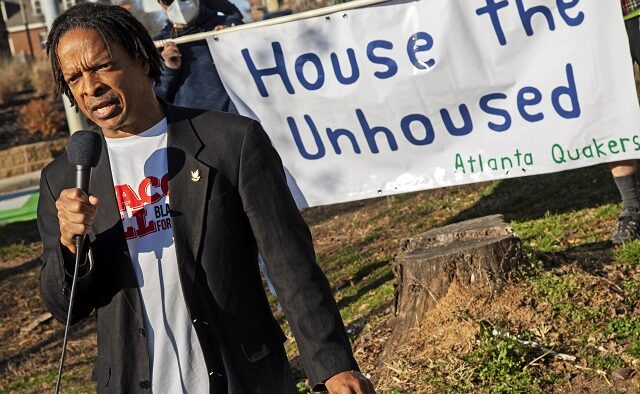 Beacon Hill Black Alliance for Human Rights Co-Chair Phil Cuffey said, “We are here to send a message to our leaders in the city of Decatur, the Commissioners of DeKalb County and especially CEO Michael Thurmond. To Mr. Thurmond, we want to say wake up. We have four demands we want to be crystal clear about. We want DeKalb County to open more warming centers, we want them to provide at least 48-hour notification when these centers will be open, we want to increase the wraparound services to help our neighbors get back on their feet and we understand that there are over 300 individuals that are on the waiting list for shelter. We want those individuals to be served as they should be.” Photo by Dean Hesse.
Share

I’m a political utilitarian. That means I follow a moral and political philosophy advocating policies that create the most value for the widest number of people. Everyone’s happiness matters, equally. Finding answers for policy questions is a math problem.

Utilitarianism is dangerous without respect for human dignity, of course. Taken to its extremes, it can provoke horrors like harvesting someone’s organs if killing one person might be worth saving 10. Utilitarianism suborns torture in “ticking bomb” situations that are seldom as real as we imagine them to be. Utilitarian philosophy asks us to think about how many small calamities we would inflict on groups of people to save one life, and how many lives we might sacrifice to avoid collective indignities we believe are worse when added together.

Still, I’m re-reading John Stuart Mill and thinking about this stuff because, once again, DeKalb County contemplates what the government should do when it gets cold enough to kill people on the street.

A coalition of advocacy groups have come together to press the county to open more warming shelters and, critically, to publicize that the shelters are open and to provide transportation to those shelters for people experiencing homelessness. In 2019, DeKalb counted about 420 people as experiencing homelessness – a number that is not just an undercount, but probably a significant undercount given DeKalb’s poverty rates and problems with substandard housing that are similar to those in Atlanta, which counts more than 3,000 people as homeless.

When I helped close Peachtree and Pine a few years ago, some people – including some involved in this advocacy effort in DeKalb County – argued that closing the shockingly dysfunctional and dangerous “shelter” would get people killed in the winter. We are coming to the end of the fifth winter since the shelter closed. By all indications, that hasn’t happened – hypothermia deaths have remained more or less statistically constant in the city of Atlanta, in the single digits per year.

Almost everyone who dies of hypothermia is over 50. Many are not homeless, but are instead experiencing dementia, wandered away from their home and became lost. Others tend to be suffering from chronic alcoholism and substance abuse disorders.

DeKalb County has been comparatively absent in providing this resource. Only in the last few years has the county decided to open up some fire stations as warming shelters, funded instead through the county’s emergency management department. The firehouse in Avondale is near the Kensington MARTA Station; the others may as well be on Mars without a car to get to them. There’s no food provided by the county, nor beds or cots, just some plastic chairs in a place you won’t die.

DeKalb County, remarkably, does not have a 24-hour emergency homeless shelter. It’s service delivery strategy is in this regard substantially similar to that of outlying counties like Cobb and Gwinnett and Henry County: a bus ticket to Downtown Atlanta and the Gateway Center or Salvation Army. Last month, I met a man from Cobb County at a warming station in Atlanta, who got on a bus to Old Adamsville because he would have frozen in Marietta.

The warming stations in DeKalb open in the evening when temperatures fall below 35 degrees. The county will tweet out availability a few hours before nightfall. It’s less than Atlanta does in the cold. It is less than Gwinnett County does in the cold, which historically would have been saying something.

Only a handful of people show up when DeKalb opens warming stations. But, without warning or transportation … what would you expect?

And yet, DeKalb’s hypothermia death statistics are similar to Atlanta’s. DeKalb lost six people in 2020 to the cold – the last year for which we have statistics. We lost one person the previous year, four the year before that. Atlanta’s losses are comparable.

Warming shelters are surprisingly expensive operations. It costs thousands of dollars a day to keep a secure space heated and provisioned after accounting for food, staffing and the rest.

The money to operate a proper warming shelter usually comes out of the budget for homelessness services. Every $15,000 or so represents one year of housing and services support for one person who has suffered through chronic homelessness.

Money spent providing warming stations can be used instead to provide permanently supportive housing. How many poor people do we allow to go through a cold night outdoors, at risk of cold injury – though probably not death – to provide one additional rehabilitation apartment for someone exiting homelessness? If you’re expecting a facile answer to that question from me, you’re out of luck.

No one should be homeless in a society with more empty houses than homeless people, of course. There’s an overarching moral failure to contend with. But in the narrow question of how to allocate the resources given to people fighting to house the unhoused, I’m arguing that the people making these decisions deserve a bit of grace.

It is not an act of moral monstrosity to prioritize permanent housing over short-term comfort. The real question to ask is if that is in fact what is happening.