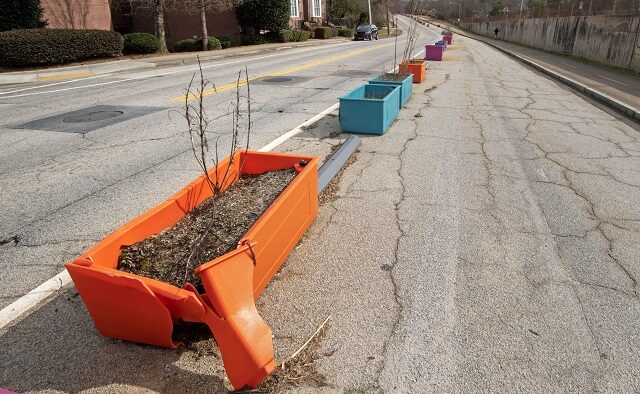 Decatur, GA — The Decatur City Commission got its first look at the finalized plans for ‘re-imagining’ West Howard Avenue and a new location for the Atlanta Avenue railroad crossing.

If commissioners greenlight the plans at their March 21 meeting, city staff will begin seeking bids to implement new pedestrian and cycle infrastructure along West Howard between Paden Circle and Commerce Drive.

The finalized designs were presented in a city commission work session just prior to the regular commission meeting on Tuesday night. 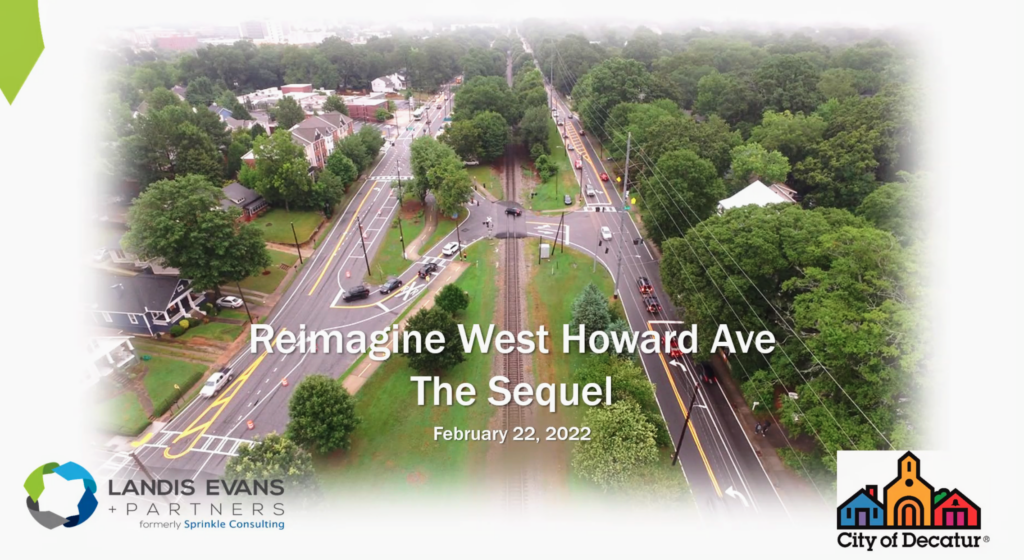 An aerial photo from the presentation during Tuesday’s City Commission work session shows the existing Atlanta Avenue railroad crossing and the road conditions on nearby West Howard Avenue. Credit: City of Decatur. 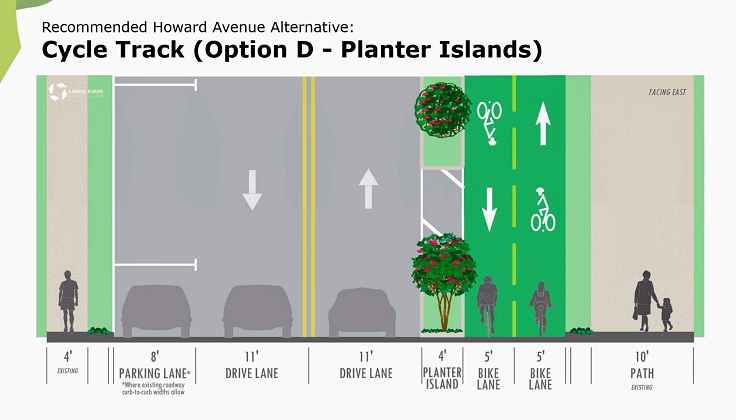 A design drawing showing the preferred alternative for streetscape improvements along West Howard Avenue between Paden Circle to the west of downtown to Commerce Drive.Credit: City of Decatur. 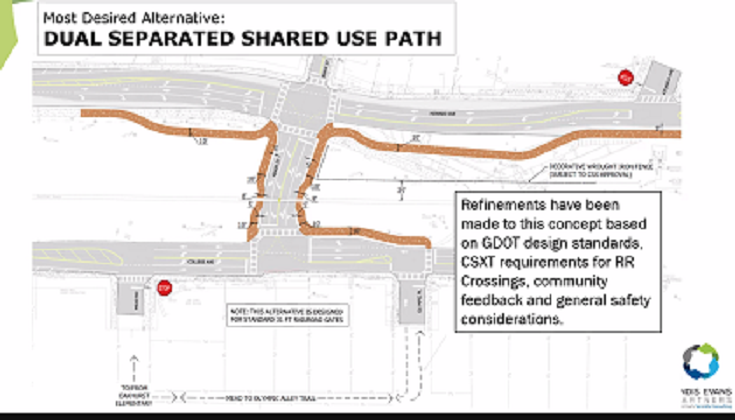 In 2019, the city commission approved plans to move the railroad crossing west to align with Adair Street instead of Atlanta Avenue. These final plans detail the additional measures that will improve pedestrian and cyclist safety at the new crossing, including dual separated multi-use paths that will allow cyclists and pedestrians to cross the tracks away from cars, a pedestrian leading interval at all the crosswalks, and lights that can be activated by the pedestrian button to prevent drivers from turning into the crosswalks.

The plans also call for an additional traffic signal at Olympic Place and College Avenue, to address concerns of residents that they would not be able to safely exit that street with only a stop sign there.

In September 2021, the city commission allocated additional funding to the overall project budget to allow for permanent traffic-calming measures along nearby West Howard Avenue that would replace the temporary planters that are currently there.

The planned West Howard improvements include keeping the existing two lanes for automobile traffic – one in each direction – but replacing the temporary planters placed on painted asphalt with a permanent 4-foot planted buffer that would border a new bidirectional separated bike path.

“People respond to the vertical when they are looking at [their] speed,” said Theo Petritsch, director of transportation services at Landis Evans + Partners, the engineering consulting firm that developed the plans for the city. “When you have more urban areas, with on-street parking, people tend to slow down. When there are substantive barriers on the side of the road with vegetation, people slow down.”

Prior to the intermediate traffic-calming measures on West Howard, with the planters separating a lane of travel, drivers only saw four lanes of car traffic and a straight road. That kind of design encourages higher speeds.

Construction of the new crossing at Adair Street, will include a ‘meandering’ of the roadway along Howard, introducing slight curves along the planted buffer areas that will help signal to car drivers that they are on a residential shared street.

The plans are the result of years of public meetings held to gather input from the community, as well as city stakeholders like the school system and police and fire departments. The initial design options were presented again with refinements to those options used to develop the final recommendations, the consultants noted.

Although the aesthetics of the colorful plastic planter boxes were often maligned by local residents, they served their purpose by demonstrating that West Howard could be reduced to two automobile lanes – from its previous four – without adversely affecting traffic flow or safety, Saxon added.

“Now we are considering these options that will reduce Howard permanently to two vehicle lanes and add additional elements, like on-street parking and permanent planters,” Saxon noted.

The staff and consultants will present a motion at the commission’s March 21 meeting seeking permission to proceed to the construction planning stage for both projects, Saxon said. Although the plans have preliminary approval from the Georgia Department of Transportation (GDOT) and CSX, they will still need to give final approval.

If all goes according to plan, the city hopes to get bids for the improvements and start construction in the early part of 2023.

More information about the planned improvements to the railroad crossing can be found on the city website here.