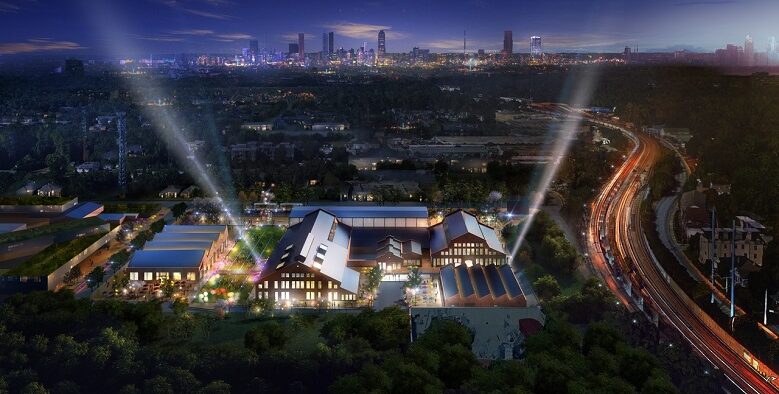 Atlanta, GA — Plans for the new development at the Pratt Pullman District are different from what Kirkwood residents originally thought would be built. At the Feb. 10 Kirkwood Neighbors Organization meeting, Atlanta City Council member Liliana Bakhtiari gave an update on the development and said it’s not a sports arena, but rather a temporary tent.

The area was slated to be home to the second season of Fan Controlled Football, which is said to be “the first league ever where the fans call the shots.” The season begins on April 16, Urbanize Atlanta reported. Decaturish published a similar story, based on information obtained from the FCF website.

Plans seemed to include building a new 1,500-seat arena that the league described as state-of-the-art for sports and entertainment. The 85,000 square-foot facility would offer a mix of field-level lounges, luxury suites and other seating that puts fans close to game action, according to the initial press release.

“We put out a stop work order, because we did not know what was going on. According to [the articles], we thought there was going to be a sports arena being built because that’s what it was called,” Bakhtiari said.

There was a meeting on Feb. 10 with the Urban Design Commission, the production team, the city’s legal team and other city staff, which Bakhtiari described as productive.

“The main takeaways that they came up with, it is not a sports arena,” she said. “This is actually a production set. They’re not building anything new. The construction you’re seeing is a tent going over an already established stage for a building.”

The tent is a temporary structure. The production company, Crazy Legs Productions, will film there on Sundays and Wednesdays.

“It will only be there for two months, and then they’re going to do one more filming, I believe, in the fall or closer to the winter,” Bakhtiari said. “The tent would apparently remain up during that time unless the [Urban Design Commission] requires differently. They’re still working out those details.”

She added that according to UDC Executive Director David Young, based on the agreement that was written with the historic district, Crazy Legs Production is within their rights to film the season of Fan Controlled Football.

“There is great accountability being taken,” Bakhtiari said. “They are asking them [about] the materials that are being used, how it’s going to be operated, they’re being forced to give a full disclosure of the set, the people who are operating this, the hours that it’s going to be used. There will be strict regulations around it.”

KNO President Megan Owens said some residents have concerns about the proximity to the existing structures, the height of the tent, and if taking the tent down and putting it back up endangers the existing buildings and the historical value.