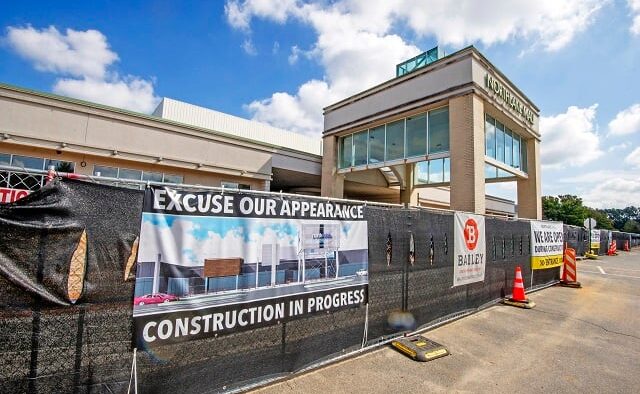 Construction fencing and signage at the entrance to Northlake Mall. Photo by Dean Hesse.
Share

Tucker, GA — The developer of Northlake Mall is being left in the dark after Tucker Zoning Board of Appeals ruled on Feb. 1 that the company must remove 676 ft. of linear lighting on the building’s exterior.

ATR Corinth Partners has 90 days to remove the lighting, which was previously approved by Tucker’s building and permitting division. ATR submitted building plans in November 2020 for exterior renovations and a building permit was issued in error, said Tucker city staff. The error was noticed by the city in April 2021.

“Granting this variance may give applicants special privileges that are denied to other property owners in the same zoning district. City council initiated a text limit or prohibit linear lighting citywide after the city incorporated [in 2016]. After a code enforcement sweep, all linear lighting that was previously installed in the city was asked to be removed,” said Tucker City Planner Jessica Echols.

Architect Emilie Lindberg, who spoke on behalf of ATR Corinth Partners at the ZBA meeting, said safety is the reason for added linear lighting.

“We worked with Emory to make this design work for them. They wanted something that was welcoming to the staff,” said Lindberg.

With employees at the location 24 hours a day, “safety at night is a huge concern for Emory Healthcare,” said Lindberg. She said ATR was willing to compromise by dimming the lights, or removing some rather than all.

“You are saying it’s a security issue, but then you just said you’re going to have [the lights] dimmed. So that negates the security issue right there,” said ZBA member Bob Espy.

It is incumbent upon the development company to know the rules, regulations, ordinances and zoning, said Espy.

ZBA voted 5-0 to deny the variance to ATR Corinth Partners. The lighting will be removed at the expense of the developer.

ZBA members appointed Neal Stubblefield as chair and Bob Espy as vice chair. Stubblefield, who ran for City Council in 2021, has volunteered on the ZBA since its inception in 2016. He is a retired engineer. Espy is a realtor who has served on ZBA since 2019.