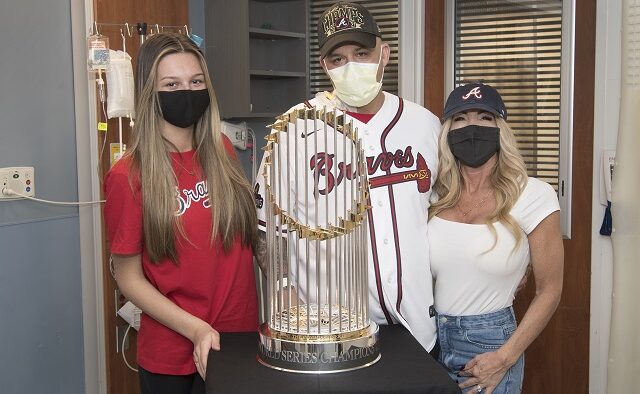 A huge Braves fan, Brad Hollingsead (center) mentioned how nice it would be to see the World Series trophy in person. Photo provided to Decaturish
Share

Atlanta, GA – A 43-year-old man from Columbus, Ga., who is on the wait list for a heart transplant at Emory University Hospital, received a World Series-sized surprise, according to a press release.

A huge Braves fan, Brad Hollingsead mentioned how nice it would be to see the World Series trophy in person, following the Atlanta Braves World Series win in November 2021.

Not long after mentioning his wish to a member of his care team at Emory University Hospital, the wheels were put in motion and several members with the Atlanta Braves organization brought the trophy to Hollingsead’s hospital room, the press release said.

“It’s more than I imagined would ever happen,” says Hollingsead. “It shows the relationship that Emory has with the Atlanta Braves and I’m proud to be able to take part in that.”

The visit lifted Hollingsead’s spirits, and many photos were taken to mark the occasion. His wife, Julie, and daughter, Natalie, were excited to be there for the special event.

He’s a former military drill seargeant who did four tours of duty in Afghanistan. He was diagnosed with heart failure in May 2021 and was admitted to the hospital in September 2021. He has to stay there so he can receive his medications and daily monitoring. He’s been there 140 days so far and watching the Braves’ championship run helped him pass the time.

“They are an awesome baseball team,” says Hollingsead of the Braves. “I like to follow them. It was awesome watching them win the World Series. It made my days go by fast during the playoffs, and watching their run towards it all.”