As gas prices soar, advocates in Georgia promote other ways to get around

As gas prices soar, advocates in Georgia promote other ways to get around 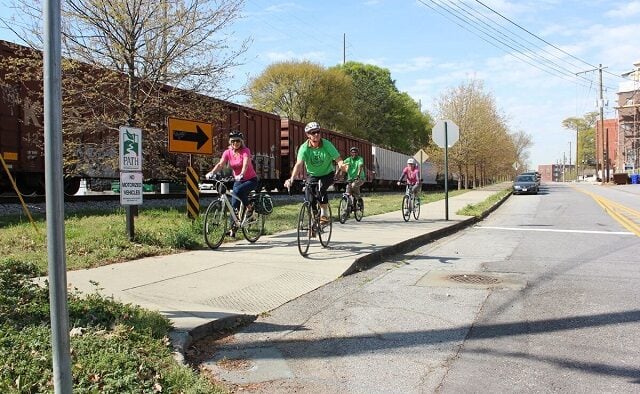 Amid persistently high gas prices, advocates in Georgia are highlighting other ways to get around: bikes, walking and public transit, which are not only cheaper but also friendlier to the environment.

On a recent MARTA trip, “When I was like, putting my bike on the bike rack of the bus and everything, the operator was going, ‘Oh, everyone’s gonna need one of those soon enough, like these gas prices are just too high,’” Mullins said.

Atlantans already have a “hunger” to bike and use public transit more, she said.

“Especially now, I think that hunger is only increasing with the gas prices going up as well,” Mullins said.

And while the recent spike in gas prices has some looking for cheaper ways to get around, plenty of Georgians don’t have access to cars to begin with. Or they want to cut back on driving for another reason: climate change. The transportation sector is the biggest source of the emissions that cause global warming nationwide.

But there’s an obstacle.

Groups like hers around the state are tackling this problem from two directions at once.

That means advocating for bike lanes, safer intersections and road design that accounts for everyone using the road — bikes, pedestrians, people in wheelchairs and on scooters — not just cars.

“If you look at communities like Amsterdam or Copenhagen, it didn’t just pop up as a great safe and popular place for people to ride bikes,” Devine said. “Those cities worked on that really, really diligently over decades to become centers for cycling, for safe cycling for all ages.”

And it means educating people. Local advocacy groups offer classes for cyclists of all levels, funded by the Governor’s Office of Highway Safety.

Rachel Umana of Bike Walk Macon, which just started offering classes this year, said people are happy to sign up.

“It’s something that they used to do years ago and hate that they’ve kind of lost that ability to do it and express that they got a lot out of the class and gain confidence,” she said.

In Macon, would-be cyclists can graduate through three different levels, from beginners with little to no biking experience to more advanced urban cycling.

In Atlanta, along with beginner lessons, there are classes covering how to use a bike and public transit together, like how to bring your bike on a train. The goal for all of it: creating comfortable, confident cyclists and transit riders — on streets that are safe for them to use.

Meanwhile, Macon’s public transit authority has responded to the high gas prices of recent weeks by offering free bus fare through April 30. A post on the authority’s Facebook page called it “a thank you to current riders and an enticement to give MTA a try.”