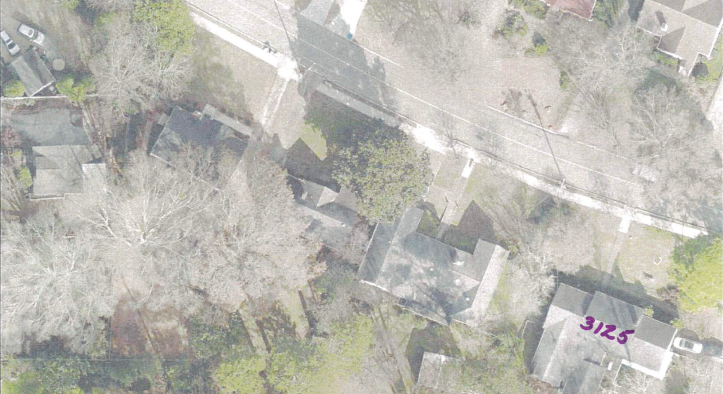 The property owners at 3125 Kensington Road in Avondale Estates applied for a front and streetside setback to build a new house. Photo courtesy of the city of Avondale Estates.
Share

Avondale Estates, GA — The homeowners at 3125 Kensington Road in Avondale Estates applied for a variance to reduce the front and streetside setback on their property in order to tear down the existing house and build a new one. The city’s Planning, Zoning and Architecture Board, recommended approval, but city staff reversed course and recommended that the city commission deny the request.

“After discussing the matter further with our city attorney, it is now the city staff’s opinion that the property owner did not demonstrate a hardship necessary to require the variance, the work could be done within the bounds of the current zoning code and that the lot does not prohibit the work from being done,” City Manager Patrick Bryant said. ” … Staff’s recommendation now is that the request does not meet the hardship requirement criteria as found in the code, and I would recommend the [city commission] consider denying this variance request for that reason.”

Most of the new construction would sit within the current footprint of the existing house, but the city’s zoning code completely changed the setbacks. For the R-12 zoning designation, the minimum setback is 40 feet on the street front and side, 10 feet on the interior side and 35 feet in the rear.

“Any new construction would have to otherwise conform to those setbacks and, based on how the lot is situated, we believe that those setbacks could be adhered to,” Bryant said. “That’s the reason that I’m suggesting it doesn’t meet the hardship criteria per staff’s recommendation. That does not preclude the board from granting the variance or denying the variance.”

Mayor Jonathan Elmore said the project creates a hardship by design, and he wasn’t in favor of approving the variance.

The city believes the property owner could build to the rear of the property, meet the setback requirements and still achieve the same square footage, Bryant said.

Richard Stevens, the architect working with the property owners, said they were surprised by the new recommendation.

“The issue is it’s a 100-foot wide lot. The 40-foot side setback on one side and the 12-foot setback on the other essentially cuts the buildable area more than in half,” Steven said. “From an architectural standpoint, this is going to result in a house that’s a bit out of context with the houses on the lot because it’s going to be a linear house where the other houses are more parallel to the street.”

He added that the other issue is there are some large trees in the back of the lot that the property owners are trying to preserve.

“Going further into the backyard will most certainly take at least one of those large hardwoods out,” Stevens said. “Again, I would ask you to consider that the buildable area of the lot with the new zoning ordinance has been effectively cut by over 50% and there is a reason for preferring to go side to side parallel to the street rather than back in terms of neighborhood context and in terms of the health of the trees in the backyard.”