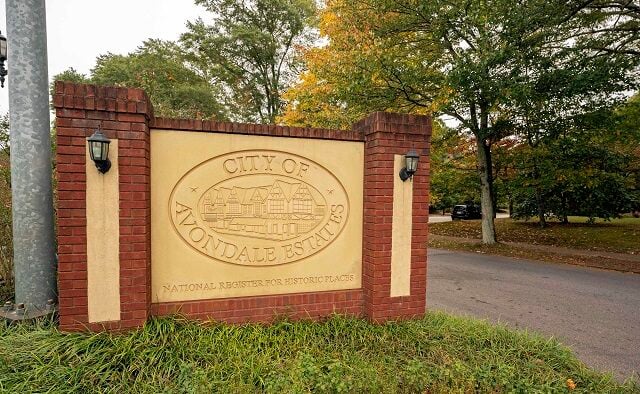 Avondale Estates, GA — Residents on Hess Drive in Avondale Estates are urging the city to find a solution to the many stormwater issues the street faces and take into consideration the amount of water that flows when it rains.

Shirley Harris has lived in her home on Hess Drive since 1996 and the creek was there when she bought her house. The previous owner of her home built the culvert, so water could flow smoothly.

“Yes, I knew the creek existed, but a change was made that impacted us that put more water than the initial builders and designers meant for it to happen,” Harris said.

She didn’t have problems with significant stormwater on her property until about 2000 when a small waterway behind her home was redirected by DeKalb County so all the water came to the front of Hess Drive.

Residents said the county’s decision to redirect the waterway is the root cause of the issues they are facing.

There are easements between the houses on Hess Drive and Viscount Court, Assistant City Manager Paul Hanebuth said.

“There is infrastructure that handles water, both the obvious one that we all see on Hess, but there’s also a pipe system that goes about halfway down Hess, between the houses on Hess and Viscount, that handles water. It joins the culvert at Billy Elek’s driveway,” Hanebuth said.

When it rains, Harris said it looks like there’s a lake in front of her house. She has holes in her backyard, she puts rocks down in that area of her yard to prevent erosion, but to no avail.

“I’m seeing within my house — which is the first one impacted by the reroute — big cracks in my bedroom ceiling, which I never had,” Harris said. “I’ve been there 26 years. My house is splitting.”

In 2003, a culvert on Hess Drive failed, and DeKalb County replaced it at the time. Harris said there was another infrastructure failure that occurred about six months ago, and the Elek’s culvert is currently failing.

“My driveway is impassable and absolutely presents a public safety issue. I… The hole is about 5 feet by 3 feet now,” Elek said. “You can completely see the pipe, which we have known for years is undersized.”

“Things are failing, and they have been for years,” he added.

At the March 9 city commission meeting, the board continued to discuss two stormwater extent of service proposals to define what infrastructure the city and private property owners will be responsible for.

“It’s important to realize that up until this point in time, the city of Avondale Estates has never operated under any kind of extent of services policy associated with stormwater,” Mayor Pro Tem Brian Fisher said. “What that does is provide guidelines by which the city would be responsible for certain infrastructure, and which individual residents would be responsible for certain restructure.”

The policy would allow the city to be more consistent when making decision around stormwater infrastructure, it would expedite repairs, and it would help the city plan for future budgetary needs.

Currently, the city is responsible for infrastructure that’s on city-owned properties, between rights of way and areas that have maintenance easements expressly recorded as part of the property’s deed, according to the current stormwater ordinance.

“What’s not included in the existing ordinance is infrastructure on either side of the right of way, privately-owned detention ponds that might be part of a development agreement, for instance, and extensions to the stormwater system that somebody put in somewhere along the line without getting a permit,” Assistant City Manager Paul Hanebuth previously said.

The commissioners did not vote on the extent of services policy on Wednesday night. They generally favored option one, in which the city would be responsible for all conveyances intersecting public rights of way and city-owned property. It would not include conveyances along roads owned by the Georgia Department of Transportation. With this option, the city would be responsible for about 15,600 linear feet of stormwater conveyances, which is 227 pipes and channels.

This could include pipes, ditches, swales, roads with drainage systems, rights of way, storm drains, and detention ponds, among other things.

Fisher also favored this option, but would like to see the city entered into easements with the homeowners on Hess Drive to clearly define what is the responsibility of the city and the residents.

“As it is defined right now, if one of those culverts were to fail under the extent of services policy [option] one, a resident would be responsible for fixing that stormwater culvert and replacing their own driveway,” Fisher said. “I don’t think that’s right. I think that clearly the city has used it as public infrastructure over the years.”

Mayor Jonathan Elmore also favored option one and said that the channel and other infrastructure there should be the responsibility of the homeowners.

“These things were built by homeowners, builders, but when they bought the house, they took on that responsibility. There was no easement attached with the county because there are none as far as we know,” Elmore said.

He would prefer to allow homeowners to approach the city on a case by case basis, state their case with an engineering report and if the city feels it’s valid, it could replace some infrastructure.

Commissioner Lionel Laratte favored option two and thinks the city should be responsible for maintaining the channel.

“I think that fact is that it has become infrastructure,” Laratte said. “It is drainage that supports the rest of the city as far up as…the Baptist church. It supports the city. I think that the city, as a provider of services, it is the city’s responsibility to take care of such items.”

There will be a second reading on the extent of service policy. Elmore encouraged residents to send comments to the board, so they can hear about other experiences citizens have had related to stormwater.