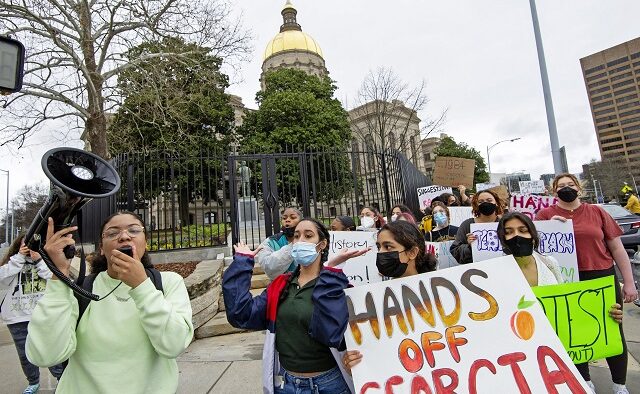 Students march past the Georgia State Capitol during the Hands Off Georgia protest in opposition of HB 1084 and SB 377 on Friday, Feb. 25, 2022. Photo by Dean Hesse.
Share

Atlanta, GA — In a 32-20 vote on March 11, the Georgia Senate passed a bill that will not allow local boards of education and school systems from using curricula or training programs “which act upon, promote or encourage certain concepts” from being taught in classrooms.

Senate Bill 377 also prohibits entities from discriminating against others on the base of race, skin color or ethnicity, provides a complaint resolution policy and process and outlines penalties for violating the bill.

State Sen. Bo Hatchett, (SD-50) said he pledged that this bill would not inhibit the teaching of history and pledged to give parents a voice when it comes to classroom subject matter that strays outside the bounds of teaching historical facts.

In an effort to do that, the bill outlines nine divisive concepts that would be prohibited, such as teaching that:

– The United States of America and the State of Georgia are fundamentally or systemically racist;

– An individual, solely because of his or her race, skin color, or ethnicity, is inherently racist or oppressive, whether consciously or subconsciously;

– An individual should be discriminated against or receive adverse treatment solely or partly because of his or her race, skin color, or ethnicity;

– An individual’s moral character is inherently determined by his or her race, skin color, or ethnicity;

– An individual should feel demeaned or caused to feel guilt by a teacher because of the individual’s race, skin color, or ethnicity;

– Performance based advancement or traits such as a hard work ethic are racist or were created by individuals of a particular race to oppress individuals of another race; or

“Those are the concepts we believe should not be taught to our children,” Hatchett said.

The bill allows history to be taught, but it doesn’t allow a teacher to say that because of this history and because of the color of a student’s skin, they should feel a certain way, he added.

Some legislators still wondered what problem this legislation is trying to solve. Sen. Nan Orrock (SD-36) wondered if there is any evidence that the teaching of divisive concepts is occurring in Georgia schools.

“I think…99.99% of Georgia teachers would not teach these divisive concepts, and I think 99.99% of them do not,” Hatchett said.

One thing that was shocking and alarming to Hatchett to hear from emails and comments on social media throughout the process of introducing SB 377 was that there are people who criticize the bill and say the divisive concepts should be taught, he said.

“The fact that that rhetoric is out there, the fact that there’s 0.01% of the population that believe those divisive concepts should be taught in our schools, is an argument for why this bill is right and why it is an appropriate time to bring this piece of legislation forward,” Hatchett said.

Orrock also wondered how that 0.01% of the population justifies the legislation. In response, Hatchett said that he couldn’t support that argument because “I believe [0.01%] of teachers would never have inappropriate relations with students, but we still have laws there to protect them.”

The legislation doesn’t solve problems that public schools are facing in Georgia, but will create problems, State Sen. Elena Parent (SD-42) said. She added that the bill is vague and confusing.

Some also wondered where the line is and at what timeframe is the cut-off between the past and present.

“Let’s say a class is learning about how governments imposed residential segregation and how the banking system redlined in minority neighborhoods,” Parent said. “Less clear in the bill is whether the teacher can tell students about discriminatory practices in banking today. Can he or she explain that big banks, like Wells Fargo, JP Morgan, Citibank and others, have paid billions of dollars in settlements related to discriminatory lending practices within the last decade?”

She added that the bill will create more problems by causing confusion among teachers, students, parents, administrators and the public that will lead to complaints and investigations.

“You cannot legislate away everything that you don’t like,” Parent said. “This bill seeks to intimidate, censor dialogue and deny learning opportunities to children.”

Those in favor of the bill have said they aren’t opposed to students learning about history, and yet the bill seeks to prevent the teaching of truth, State Sen. Kim Jackson (SD-41) said.

She wondered what teachers are supposed to do when they are faced with questions about inequality in the classroom.