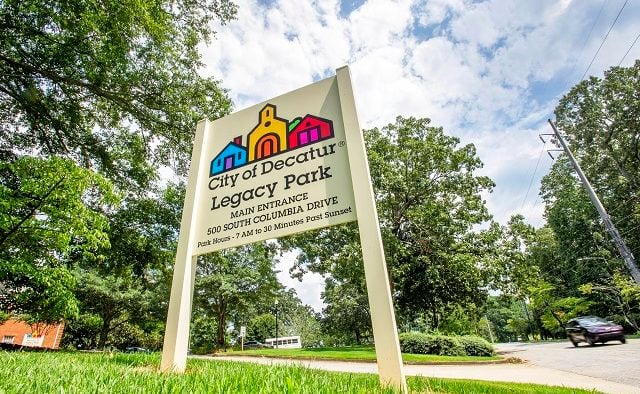 Decatur, GA — After a contentious 90 minutes of public comment on March 2, the Decatur City Commission decided to move forward with purchasing 7 acres of land and refinancing a larger portion of Legacy Park to develop the South Housing Village.

In 2017, the city bought the 77-acre campus that was the former United Methodist Children’s Home, which was later renamed Legacy Park. The Children’s Home had been in Decatur since 1873 and was established to care for children orphaned during the Civil War.

Teachers, police officers, firefighters, and grocery store workers are individuals who would qualify to live in the affordable housing development.

“They’re good enough to do that, but they’re not good enough to live next door to us? No, I’m not buying that,” Powers said. “That is not what I signed up for.”

The public can submit feedback on the project through the Decatur Next website until March 15. To provide input, click here.

Those who don’t support the project cited reasons such as traffic, a need for more greenspace, a need for a feasibility study and not concentrating affordable housing in one area.

Lynn Gathercole, a resident on Katie Kerr Drive, has been a strong opponent to the project. She has claimed that affordable housing was not the top priority to come out of the 2018 public engagement process, and that most people wanted greenspace and recreation.

“For us as a community to have the opportunity where we can finally meet the demand that we have had for decades is wonderful,” Gathercole said. “I keep hearing that in the plan there’s going to be a track. It’s a multipurpose field. That’s one field that has to be shared with all these sports. It will not and cannot solve the pressing issues that we have in this community.”

She added that preserving trees and reducing the building sizes from four stories to three are good aspects of the plan.

“But to still take the footprint of that southwest corner is a problem because we need that flat land,” Gathercole said. “We have one chance and one chance only to actually have a park.”

She would like to see smaller affordable housing developments in various parts of the city closer to transportation.

Other residents agreed that and wanted to see affordable housing in a better location than Legacy Park. They also agreed that traffic will be an issue and that there are community needs for greenspace.

Resident Tiffany Downs said she’s not against affordable housing, but would like the city to use an urban planner and consider the impact to the neighborhood. Downs and others requested that the city conduct a feasibility study, especially to look at traffic and the realignment of Katie Kerr Drive.

“If you’re bringing in 500 new residents, I think there needs to be some kind of study before the bonds get issued, and the ground gets broken to build this development,” Downs said.

She urged the commission to think about having greenspace, athletic facilities and creating something that everyone can benefit from. Downs also suggested spreading the housing out.

“There’s no other mixed-use development going on,” Downs said. “This housing authority project is going to be on its own, by itself. The statistics of public housing involves crime rates and other negative implications. By spreading it out, no one is singled out and people are actually embraced in the community as opposed to being alone by themselves.”

Despite some misconceptions, the project is not considered public housing.

“Generally, when we talk about affordable housing, we are referring to housing options for households making less than the area median income (AMI), typically 30-80%, and workforce housing may include households that earn 80-120% AMI,” City Manager Andrea Arnold previously said. “The low-income housing tax credit (LIHTC) units have rents that are set at reasonable levels for lower income families.  DHA may attach some project based rental assistance to some of the units, but it will not be public housing.”

Others accused the city of not being transparent about the plans for Legacy Park and making decisions “in the dark of night.”

Commissioner Lesa Mayer, a proponent of affordable housing, acknowledged that she didn’t think there was enough of an understanding about what the feedback in the master planning process was intended to do in 2018. She agreed with residents that affordable housing will be in every neighborhood in the city and not concentrated in one area.

“I struggle with the fact that a little over 1,000 people may feel as though their voice is the only voice that would matter in a planning process because they have the accessibility to get to a planning meeting. That disturbs me,” Mayer said. “Our neighbors in this community have been called poor. They’ve been accused of committing crimes, accused of decreasing property value. They’ve been accused of barely being able to afford their rent, all because they make less money than the average in Decatur.”

The precedent has already been set for Legacy Park to have residents as it was the United Methodist Children’s Home, Powers said.

“When we were negotiating with the Methodist convention here in our region, part of it was to honor that legacy,” Powers said. “It can be an opportunity for many collaborative uses with many different people.”

Housing affordability is an issue cities across the nation face. Powers added that Decatur is trying to do their “little piece” to address the problem within the city’s 4.5 square miles.

“We have to be better as a community about what we think is important to us and articulate that in a way that it’s not an us versus them, it’s not a winner and a loser,” Powers said. “Because at the end of the day, the last thing we are going to say to someone who lives in this city is ‘hey neighbor.’”

The city is working to identify other locations for affordable housing through the Decatur Land Trust and is considering allowing duplexes, triplexes and quadplexes within single-family residential zoning.

“For everyone who came here and said put it someplace else, I want you to be supportive of those kinds of opportunities in our neighborhoods,” Mayor Patti Garrett said. “We recognize that in order to have an economically diverse city, we have to have some housing choices that allow people of different means to be a part of our community.”

The Decatur Legacy Park Master Plan was adopted by the city commission in December 2018. The plan reflects a combination of three options that were presented to the public in early 2018 and feedback from an online survey. All three options presented in 2018 had housing options at various densities and affordability.

Overall, the master plan incorporates greenspace, an amphitheater, track and field facility and a variety of affordable housing options. The city commission also approved a housing addendum that provides detail about the housing goals identified during the planning process. The plan proposes the North and South Housing Villages, their locations and the types of housing that will be allowed in each village.

The design of the South Housing Village is subject to change based on community feedback. DHA is applying for low-income housing tax credits, and the basic design of the project will have to be part of the application. The design will soon go before the city commission for a work session and vote.

The initial design concept features 132 units to be built on about 7 acres of the total 77 acres of Legacy Park.

“There are four duplexes and two single family homes that we will remove in order to put this housing there,” Faust said. “Nearly all the trees that front along Columbia [Drive] will be retained.”

He added there is a MARTA stop near the location.

The affordable housing will be for a range of incomes from 30% to 80% of the area median income. There are four apartment buildings, four stacked flats and three duplexes.

Community spaces will be featured in the plan too. Amenities will include a community center, a shared outdoor recreation space, community gardens and an entry plaza. There would be 120 spaces in the parking lot and 22 on-street parking spaces.

The project includes realigning Katie Kerr Drive with Kirk Road, which will leave about 0.75 acres of open greenspace next to the new road. DHA and the city are asking for suggestions on what residents would like to see happen with that space.

The city’s Public Facilities Authority also met Wednesday night, approved an intergovernmental agreement with the city for the sale of the 7 acres and refinancing of Legacy Park.

The purchase price in 2017 was $40 million. The city created the Public Facilities Authority to complete the purchase, and the PFA borrowed money for the deal. Decatur also received a low interest $11.5 million loan through the Georgia Environmental Finance Authority. The loan paid for 22 acres out of the total 77 acres.

The remaining 55 acres was paid for with bonds totally $29 million that were issued by the PFA.

“While the PFA purchased the property, the city is responsible for the debt service payments related to the financing for the purchase of the property. Those bonds from 2017 are now redeemable, or callable,” City Manager Andrea Arnold said.

The PFA will issue refunding bonds for 48 acres. That leaves about 7 acres on the southern portion of the property that the city purchased from the PFA to develop the South Housing Village. The overall amount of the refunding bonds is about $21.9 million, which will be used to refund the remaining portion of the outstanding bonds that were issued in 2017 and pay the cost of issuing the new bonds.

The bonds for the South Housing Village area will be redeemed through housing bonds issued by the Decatur Housing Authority, the developer of the project.

“The housing authority issued these bonds, about $4 million, on behalf of the city,” Arnold said. “The city then will pay the PFA $4 million to purchase the property, and then the PFA is obligated to use the proceeds from that sale to redeem a portion of the outstanding 2017 bonds on that 7-acre portion. The bottom line is all of these transactions reduce the city’s overall debt service.”

Doug Gebhardt, the city’s financial advisor with Davenport & Co., said that through refinancing all the bonds that were issued in 2017, the city will save about $1.6 million.