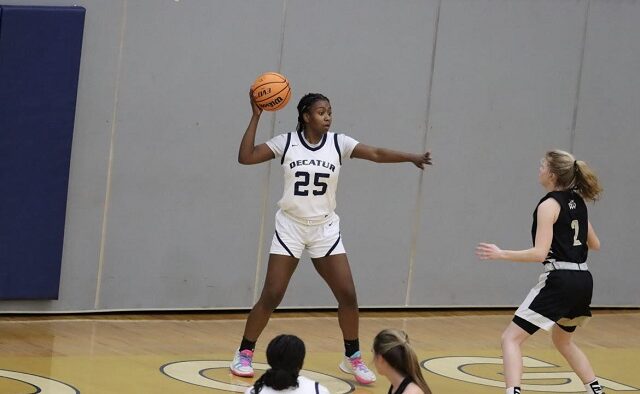 Decatur, GA — Although it was greatly limited due to COVID, the Decatur Girls Basketball team showed great potential last season, even though they played a region only schedule. Unfortunately, they lost in the first round of the state playoffs to Loganville.

“Last year’s loss in the playoffs definitely served as our fuel for this season to give it all that we’ve got because that loss left a bad taste in our mouths,” Head Coach Eric Dawson explained.

Decatur looked incredibly promising this year. Team captain, senior Morgan Miles returned to the team, along with the addition of a rising star, freshman guard Corneilia Ellington. They would be very key contributors to the success of the team.

Decatur started off the year slow, with a record of 0-3. They played three, tough, out of region teams. This was on purpose, as Coach Dawson had a plan.

“We started off on a three game non-region losing streak, which is designed on purpose to prepare us for our region play. Our goal was to schedule stronger, more experienced teams in the beginning to expose our weaknesses early so that we would be prepared for region play, and it did just that,” Coach Dawson said.

The proof? Decatur started region play on a seven-game winning streak. This included wins over quality opponents, including knocking off region rival St. Pius X at home, 44-43, in front of a lively crowd.

This success continued throughout the season, as Decatur finished off region play with an 11-5 record, and a 14-9 record overall.

Unfortunately, in person attendance was limited midway through the season. Coach Dawson believes Decatur fans had a big impact and contributed to the win against St. Pius X, so the lack of fans towards the end of the year was unfortunate, he said.

“Against Southwest DeKalb, fans were limited, and the outcome was not favorable. We ended up losing by 8 in the first matchup, with it being a tight game from the tip off and by 14 on senior night for the second matchup. Having fans without restrictions would have certainly given us the boost that we needed,” Coach Dawson said.

Decatur was in a good position for the region tournament.

They were seeded 3rd, and were hosting all 3 rounds. They took care of business against Lithonia High School fairly easily in Round 1, beating them 62-37. They then faced St Pius X again, and came through when they needed to, winning 43-41 in the semifinals. But they lost the region championship to Southwest Dekalb High School, in a tight and heavily contested game that ended in the final score of 39-35.

The team matched up against Calhoun High School in the first round of the state playoffs. Decatur hosted, and this was the first game since the midway part of the season that saw full fan capacity at a home game. Decatur came up short, mostly due to Calhoun’s “sharp shooting” abilities.

That finished off the season. But it was a good season, Coach Dawson and his team, the coach said. Around the program, there’s a feeling that the future of Decatur Girls Basketball is bright.