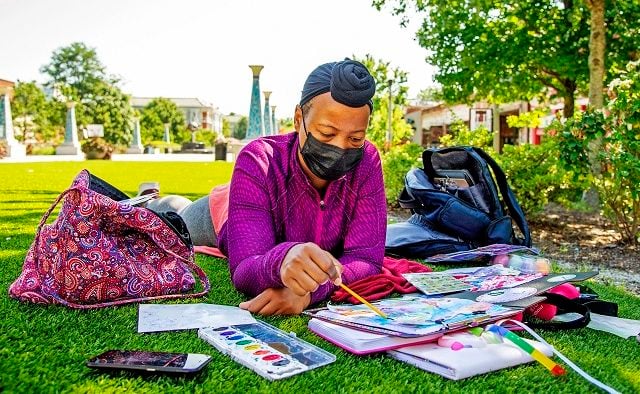 FILE PHOTO USED FOR ILLUSTRATION PURPOSES: Clarissa paints with watercolors at the Decatur Square on Labor Day morning, Sept. 7, 2020. She said she is housing insecure and her face was swollen under her mask from an insect bite she got sleeping on the street the night before. She stays in motels and Airbnb’s when she can. “I work at home ironically as a homeless person," she said. She needs an internet connection to work. “I’m like everyone else. I’m trying to save money. All I want is a tiny house on a small piece of land. I want to do it myself, but I do have to receive what people give me. I’m fighting it but, it doesn’t look like I’m winning.” Photo by Dean Hesse.
Share

Decatur, GA — The city of Decatur held a virtual town hall on March 16 to discuss homelessness in Decatur and the surrounding area.

In her introductory remarks, Mayor Patti Garrett said that being part of Atlanta’s urban core makes homelessness an important issue for Decatur. She described the efforts of other municipalities and county officials on the local level, as well as organizations like the National League of Cities. Garrett said that social justice, equity, and affordable housing were all part of Decatur’s 2030 Plan.

“We know that we are not alone in working for solutions, but I hope that Decatur can be a leader in its role in partnering with community organizations, faith communities, community members and other local governments to address and prevent homelessness,” said Garrett.

Charlene Marsh said that a number of factors create homelessness, including low wages, rising housing costs, and individual crises such as serious mental and physical health problems. “Homelessness as we see it is the result of many layers of crises and policy failures, and unfortunately, there is no easy fix, and there is no quick fix. None of us will see results tomorrow, but it’s still important to act with a sense of urgency as we look to find solutions. There’s power in partnerships, there’s power in policy changes, and there’s power in letting those with lived experience lead the way,”  said Marsh.

Marsh stated that historically Decatur has looked to DeKalb County for resources and programs to address homelessness, but is beginning to look around for other resources and organizations within the city, including nonprofits and churches. “This town hall is the culmination of a number of these conversations, and we believe that if we are truly to make progress, it’s necessary for us all to get on the same page,” said Marsh.

“For the last year we’ve been working on things like the new Decatur Land Trust, which is a 501(c)3, for permanent affordability, a program called Decatur Home Rehab to try to keep lower income seniors in their homes, mandatory inclusionary housing which requires a percent of new units in multi-family housing developments be affordable to people of a certain income level, and we’ve also been looking at some zoning reform to allow a wider diversity of housing to help housing affordability,” said Allin. “The main problem we’re facing with affordable housing in Decatur is where to put new housing, because we don’t have a lot of land.”

Panelists agreed broadly that finding a permanent solution in the form of permanent housing was the goal. “One of the big shifts is away from warehousing with homeless shelters and soup kitchens to more permanent housing with wrap-around services,” said Rev. Speed. This model, also called “housing first,” is successful when implemented but takes both resources and time.

Speed said that Decatur Presbyterian began to see a shift around 2016 when the number of people sleeping on church property rose from one or two to about twenty. The church formalized a program called Threshold Ministry, run by Leslie Raymer.

Raymer emphasized that most people’s assumptions about who becomes homeless and why are misplaced. “There’s one of everyone that you could possibly imagine. I’ve even met an attorney who became homeless,” she said.

Raymer added that funding for bridge housing was frequently not available. There is often a gap between the moment when someone seeks help and when housing is available to them.

Palmer described Frontline Response, which is a local organization based in DeKalb County, as seeking to fill that gap. Frontline Response provides support and shelter in the form of funds for hotel rooms and other needs while they are waiting for an apartment. “We make sure there are absolutely no barriers to them going from point A to point B,” said Palmer.

Palmer praised the way that Decatur city police interact with homeless residents, saying that DPD officers knew the names and circumstances of the people that Frontline Response was trying to reach and treated them with dignity.

“Decatur is doing something cutting edge as a city and as a community in terms of those experiencing homelessness,” said Palmer. He said that Decatur was more proactive than other local municipalities in terms of support for Frontline Response’s work.

Fine said that A Home For Everyone in DeKalb has provided cold weather shelter, cold weather assistance, and food to community members together with area churches, but that the primary focus of the organization is to place people in permanent housing. The organization has found apartments or room rentals for 39 people so far, and is conducting a capital campaign to buy houses which it will rent to residents for 35% of their income. She described her goal in terms of policy to be zoning changes to allow low-cost efficiency apartments to be built for those who have a history in the community.

“Until that happens, we would like to see every city and county work together and take responsibility to provide safe places for people to stay, especially families with children,” said Fine.

Palmer emphasized the importance of offering resources but allowing people to make their own choices. “As a society and as a city, we can’t assume that we have the answer,” said Palmer. He added that respecting the autonomy of a person experiencing homelessness raises the likelihood that they will be able to make permanent changes.

Boyles, speaking about her personal experiences, said that one of the barriers she still faces in finding housing is that she has a criminal record from a time when she was suffering from addiction. Boyles said that even though the housing programs she participates in are supposed to be available for everyone, sometimes landlords will look at her record despite the rules.

She also said that actually finding help for her addiction once she decided she wanted it was difficult.

Boyles currently works with Frontline and goes out to find people needing services with a note pad and not only a memorized list of services, but knowledge of the MARTA routes. She said that it’s important to make it as easy as possible for someone to take the necessary steps to move forward.

Speed brought up “the elephant in the room” in terms of how the city deals with the minority of people who aggressively panhandle or are confrontational. Baylis stated that the city has a three-part process, and the police will first try to find out what someone’s story is and what their needs are. “You don’t have to worry that someone’s going to throw them down and arrest them,” said Baylis.

For community members who wish to help, all the organizations take volunteers. Speed said that if you want to feed or donate to people who are experiencing homelessness, to work through an organization. This allows for resources to be allocated appropriately without being replicated, and also connects people with the more complex services they require.

The city of Decatur will be conducting a point in time count to ascertain the number of people experiencing homelessness in the city on April 20 and 21, 2022. Volunteer training will be conducted on April 12.  More information will be available on the city’s website.