Residents met with city staff and Decatur Housing Authority staff on Feb. 28 at Legacy Park to learn about the South Housing Village and provide feedback. Photo by Zoe Seiler.
Share

Decatur, GA — The Decatur Housing Authority and city of Decatur are seeking public input on the South Housing Village that is planned to be built at Legacy Park near the intersection of South Columbia Drive and Katie Kerr Drive.

The city and DHA hosted an open house on Monday, Feb. 28, to gather feedback on the project. An online survey will be available on the city’s planning website for residents to provide suggestions.

At the Nov. 15, 2021, city commission meeting, the board approved an intergovernmental agreement with the Decatur Housing Authority. The DHA will serve as the developer of the South Housing Village at Legacy Park.

The City Commission is holding a special called meeting related to the project on Wednesday, March 2, at 7 p.m. at Decatur City Hall, 509 N. McDonough Street. The meeting will be available via Zoom as well.

This meeting will be held in-person. Members of the public wishing to participate during either
the “Public Comment” or “Requests and Petitions” portions of the meeting may attend the
meeting in one of two ways:

1. Attend in-person by coming to Decatur City Hall, 509 N. McDonough St. A
temperature check and wearing of a face covering are required for entry into the building.

2. Register in advance at https://zoom.us/j/95226820696. After registering, you will receive a
confirmation email containing information about joining the meeting. You may also
participate by phone by calling (929) 205-6099 and entering the meeting ID (The 11-digit
number shown in the Zoom registration link.)

NOTE – This meeting will utilize virtual meeting technology. We cannot guarantee it will
operate as planned. If your participation must be a matter of public record, attend the
meeting in person or email your comments to City Manager Andrea Arnold at
[email protected] by 5:00 p.m. on Tuesday, March 1, 2022.

Going forward, DHA will go to the city commission in April for a work session on the master plan and budget, and a public hearing before wrapping up the tax credit application in May, DHA Executive Director Doug Faust said.

The initial design features 132 units. The affordable housing will be for a range of incomes from 30% to 80% of the area median income.

There are four apartment buildings, each with a mix of one-bedroom and two-bedroom units. Three of the buildings have 24 units and the fourth will have 30 units.

Community spaces will be featured in the plan too. Amenities will include a community center, a shared outdoor recreation space, community gardens and an entry plaza.

David Hamilton, the architect from Praxis3 working on the project, said the development team is trying to match the original planning that’s in the housing addendum of the Legacy Park master plan.

“That was very important. They spent a lot of time and public effort on this, so we pretty much matched it,” he said. “The only difference are we’re actually a little better scale. We went with three stories. They suggested four stories, and we do have a little more parking because the housing authority felt like they wanted at least one parking space per unit as opposed to that plan that has almost no parking.”

There would be 120 spaces in the parking lot and 22 on-street parking spaces.

“We’re not crazy about surface parking, but it was a necessity. We didn’t want folks to have to park in the park or the neighborhood. We felt like they needed to have their own parking,” Hamilton said. 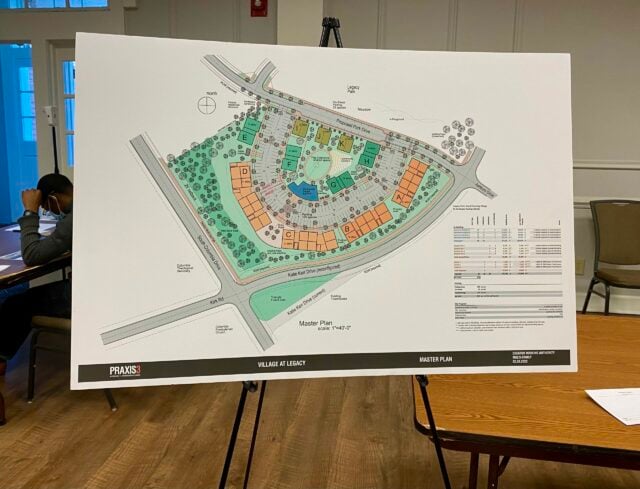 A board at the South Housing Village open house at Legacy Park shows the layout of the initial design and the phasing of the project. Photo by Zoe Seiler.

The South Housing Village will be completed in two phases. In the first phase, the stacked flat, duplexes, some apartments and the amenities will be constructed. The second phase will include the remaining apartment buildings. The project is being phased because DHA can’t get enough financial resources to build the project all at once, Faust said.

“There’s a limit on how many tax credits you can get in a given year, so we can only afford to build about half of it,” he said. “If we could all the money at one time, we could, but we can’t. It will be phased over two years.”

With the amenities, the developers are hoping to create a sense of place and a neighborhood.

“What we have really tried to do is use those individual buildings, use the spirit of [the original planning] to create places,” Hamilton said. “We’ve tried to develop a lot of community space to make it feel like a neighborhood and not a development,” Hamilton said. 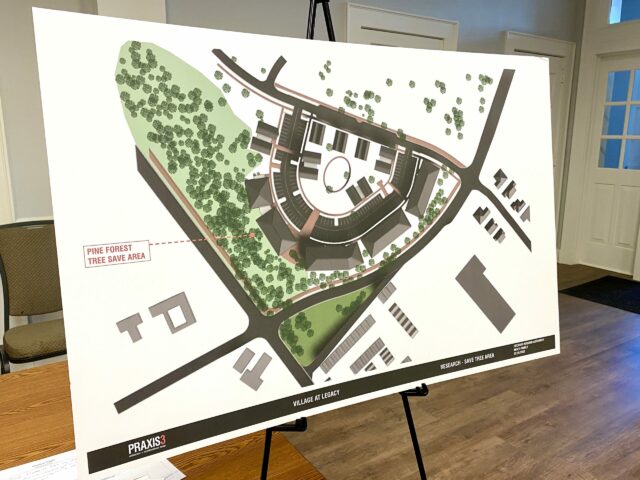 The city of Decatur had board’s up at the South Housing Village open house on Feb. 28 showing the plan for the project. This board shows the area of trees that will be preserved. Photo by Zoe Seiler.

The project area has shifted slightly away from the trees that are along South Columbia Drive and closer to the meadow to preserve more trees.

“With the inclusive playground and the meadow, we were really trying to make sure to have that tree save area not push it too far into the meadow, which is what we want for the cross country course. There’s a lot of activities there,” Planning and Economic Director Angela Threadgill said.

The city’s updated tree ordinance goes into effect on March 21, and it includes a special exception for affordable housing.

“The City Commission may authorize special exceptions to the requirements of this section when public purposes are met and such exceptions support the community goal of affordable housing. Such exceptions shall be considered for permanent, bona fide affordable housing and subject to such standards, limitations and conditions as determined by the city commission,” the ordinance states.

Assistant City Manager David Junger said he hasn’t heard anything about DHA attempting to do that.

Deputy City Manager Hugh Saxon added that DHA hasn’t gotten to a point where they’re looking at the ordinance, but the exception is something they could apply for, but the rules for the exception haven’t been finalized yet.

Additionally, as part of the project Katie Kerr Drive will be realigned to line up with Kirk Road, which will leave about 0.75 acres of open greenspace. DHA and the city are asking for suggestions on what residents would like to see happen with that space.

“Some of the people have said raised garden beds, greenspace with more native species, space for a rest area along the green way. We’re just really trying to learn what people want. It’s still super flexible on what it could be,” Legacy Park staff member Madeleine Henner said.

Faust said he is looking forward to future residents being able to access the city through MARTA and for kids to experience City Schools of Decatur.

“It’s a great opportunity for families because we’ll create a nice community and the community will then have access to all of Decatur,” Faust said. 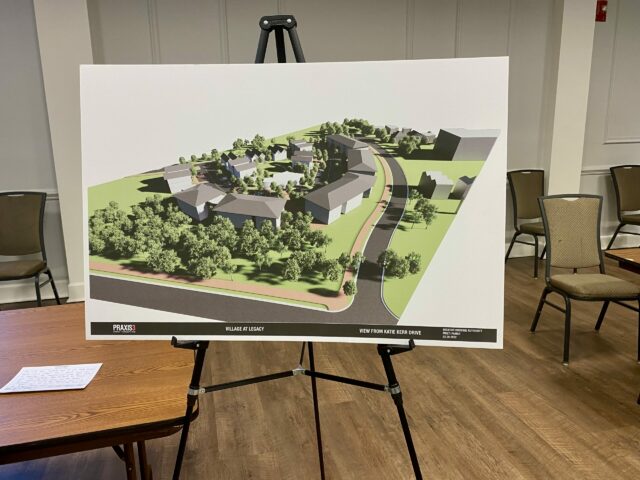 At the South Housing Village open house on Feb. 28 at Legacy Park, board were displayed around the room showing the initial plans for the project. Photo by Zoe Seiler. 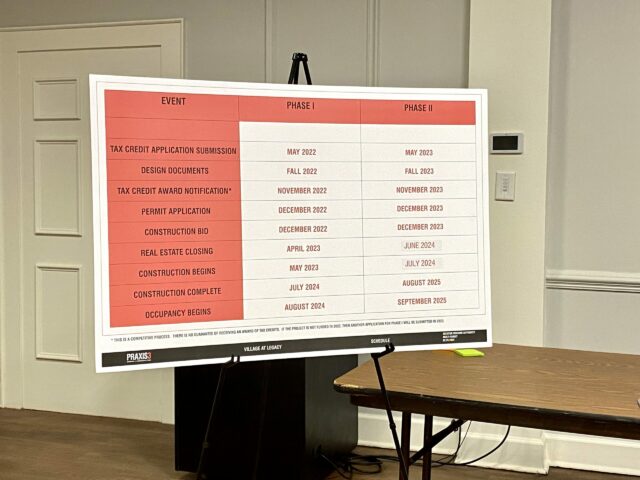 This board, displayed at the Feb. 28 South Housing Village open house, outlines the timelines of both phases of the project. Photo by Zoe Seiler.