Decatur, GA — At its regular meeting Tuesday, the Decatur Planning Commission tabled consideration of a developer’s rezoning application and request for an exception to tree canopy requirements for a proposed 34-townhome development along East Lake Drive in Oakhurst.

Because the public hearing had already been advertised and several members of the public attended the meeting, the commission agreed to hear presentations both in support of and against the new development.

Supporters of the development said it would provide much-needed housing in the city of Decatur. All of the townhomes will be two- and three-bedroom rental units, with six of the homes reserved for tenants with incomes at or below 80 percent of the area median income.

This is almost twice the number of affordable units that are required by the city’s inclusionary zoning ordinance, the developer’s attorney, Michèle Battle, said during the meeting.

“We want to be part of that and provide affordability for hardworking people in the city of Decatur,” Battle said. 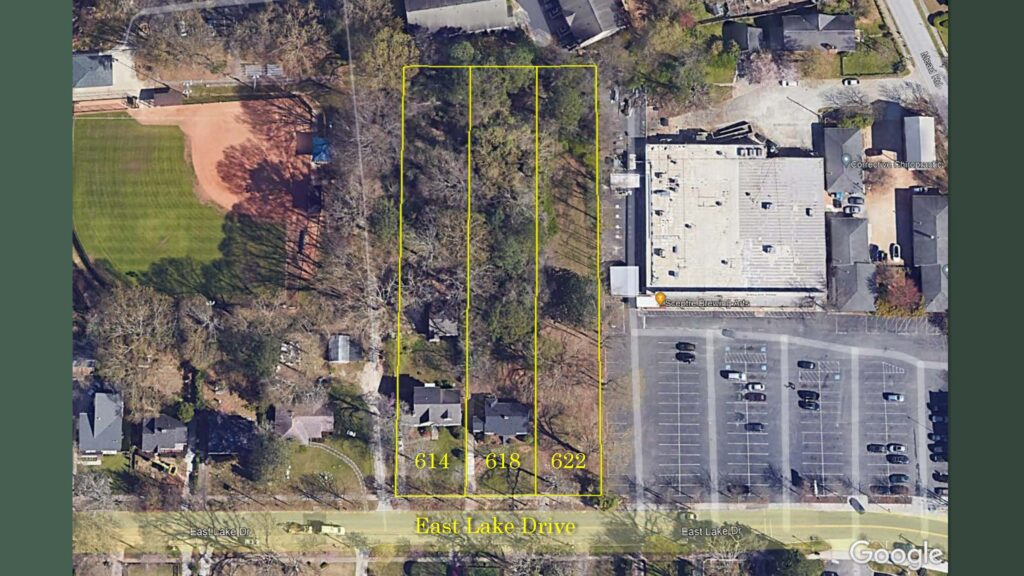 A photo showing the location of the East Lake Drive development.

Parkland is the developer of a similar community, Sweetwater Springs, in Suwanee and has experience constructing high-quality homes that will be consistent with the surrounding neighborhood, she added. As rental homes, they will allow Millennials and empty nesters the possibility of moving into a home and neighborhood that they might not otherwise be able to afford in the current market.

“People who were able to buy here earlier are not moving out as often, because they did get a good price on their homes,” Battle said. “There aren’t as many houses available to buy.”

The affordable units will be indistinguishable from the market-rate flats and distributed throughout the property, she said.

Robert Wayne, who owns one of the lots that will be redeveloped as part of the proposal, said he is a lifelong resident of Oakhurst who hopes the new townhomes will help keep the community economically diverse.

“I now live directly across the street [on] East Lake Drive and have since 1982, but I was born and raised two blocks away from here … I have been here a long time and I have seen both the benefits and the costs of what is called progress,“ he said. “The bottom line here is, do we want this to be a community of just people who can afford to own their own homes and have a million dollar mortgage? Or, is there some benefit to having some diversity in our housing?”

Several nearby residents attended the meeting to express concerns about the impact of the development on the surrounding neighborhood, with concerns centering on the added traffic volume, the risk to pedestrian safety as well as the frequently overwhelmed sewer and stormwater infrastructure in the area.

“With 34 units and potentially two cars [for each unit] to come out of a driveway that is right at the entrance to the park, that is a completely dangerous situation,” said resident Kimberly Easley who also lives on East Lake Drive.

Other speakers noted that the portion of Feld Avenue running adjacent to the property is currently an unpaved lane that serves as a pedestrian and bike corridor through the neighborhood to Oakhurst Village and Oakhurst Elementary. The draft of the developer’s plan calls for paving and improving that street to make it suitable for car traffic.

“My kids and I walk that path every morning to go to Oakhurst,” said resident Randolph Kallenberg. “And it is not just us, it is multiple families, children and older people using that path. And now that path will become a road, an extension of Feld.”

Residents from around the city were particularly concerned about the request for an exception to the city’s tree canopy coverage requirements, with a number of people providing written comments before the meeting and calling in to participate by Zoom.

“Based on the materials that the developer provided, I can only assume that they intend to scrape and grade all of the lots and then replant with the trees that are shown on the proposed site plan,” said Erin Murphy, who lives on Mead Road. “A quick walk around the lot will tell you that there are several old-growth and high value trees currently there, including a stand of healthy pine trees, a beautiful Magnolia and several oak trees.”

That level of tree removal and construction will cause flooding and drainage issues for neighbors, as well as remove crucial tree canopy, Murphy said, urging that an alternative design be considered for the properties.

The developer welcomes the additional time to meet with community members and address their concerns, Battle, the attorney, said at the end of the meeting.

The commission’s action to table means that they will take time to engage with the community in discussion to attempt to address their concerns and then return to the commission when they are ready to proceed.

“We want to have a meaningful dialogue,” Battle said. “We are committed to putting something together that we can work with the community on, and we will work very diligently to address the issues that have been raised.”

In other business, the commission voted to recommend approval of a request to rezone property at 465 Clairemont Avenue from R-60 single-family residential to I-institutional to allow the childcare center Smarties Academy to continue to operate in that location.

The property is the former site of The Common Table (previously known as The Lutheran Church of the Messiah), which has leased space in its campus to Smarties since 2012. Common Table ended its ministry in 2021.

The daycare has been operating as an allowed accessory use of the church property. However, the church decided last year to close and cease operation, Julie Sellers, attorney for the business’s owner, told the commission.

Under Decatur’s zoning code, churches and schools are an allowed use in R-60 residential districts. But the daycare, operating on its own, would not be an allowed business type.

Smarties has reached an agreement to lease the property and continue to operate there as they have been, but the existing zoning prevents this, she said. In fact, preschools and daycares are only allowed in Institutional districts with a conditional use permit (CUP) which they are also seeking.

“What we are seeking is a zoning that will allow us to be the primary use of the property instead of an accessory use,” Sellers said, further emphasizing that no changes to the buildings or the business are planned.

During the meeting, nearby residents said they were happy with the presence of the daycare there, but were concerned that a rezoning to Institutional would allow a future owner to build a larger school or other facility on that site, without needing to notify neighbors or seek approval from the city.

Sellers clarified that any new building or expansion on the site would already require separate approval from both the Planning Commission and Historic Preservation Commission as the church is located in the Clairemont Avenue Historic District.

To further allay residents’ concerns, the daycare owner agreed to accept a Planning Commission condition attached to the application that would limit the facility to only admitting the same number of students (148) they are currently licensed to have, and not expand enrollment, even though they would now be the sole occupant of the property.

The application moves for final approval by the Decatur City Commission at its next meeting, March 21 at 7:30 p.m.