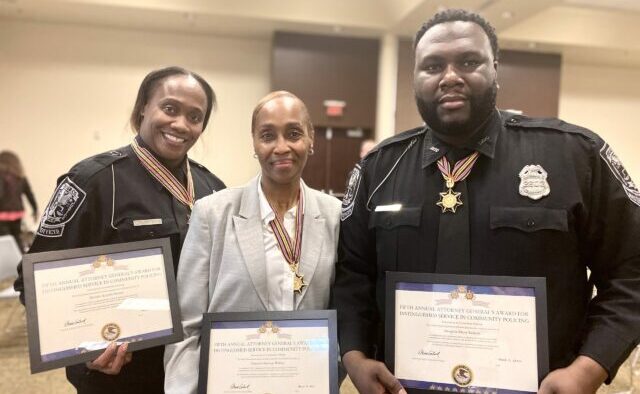 Clarkston, GA — The hard work of three DeKalb County Police officers is paying off, according to DeKalb Police Detective LaTosha Prather. She was one of three officers received the Fifth Annual Attorney General’s Award for Distinguished Service in Community Policing on March 17 at Georgia Piedmont Technical College.

Detectives Khary K. Ricketts, LaTosha B. Prather and Dan-nae Webber, who is retired, were honored for their work with the DeKalb County Police Athletic League Plus (PAL) program.

After the event, Ricketts and Prather went right back to work to go check on some of the kids in the program.

DeKalb County Police Athletic League Plus (PAL) is a non-profit organization whose goal is to have a positive impact on the youth of the county and improve the quality of life for all who participate in the program. PAL is focused on providing a safe haven for kids to go and grow, according to the PAL website.

PAL offers a variety of programs and sports including cheerleading, dance and basketball, an annual summer youth academy, “Gaming with a Cop,” and a career development program.

“Every day, law enforcement officers across the country work to strengthen the community ties that are essential for public safety. The Attorney General’s Award for Distinguished Service in Community Policing recognizes individual officers for exceptional efforts in policing,” Garland said. “It would be a significant understatement to say that Detectives Ricketts, Prather, and Webber are just highly deserving of this high honor. I want to say super-highly deserving.” 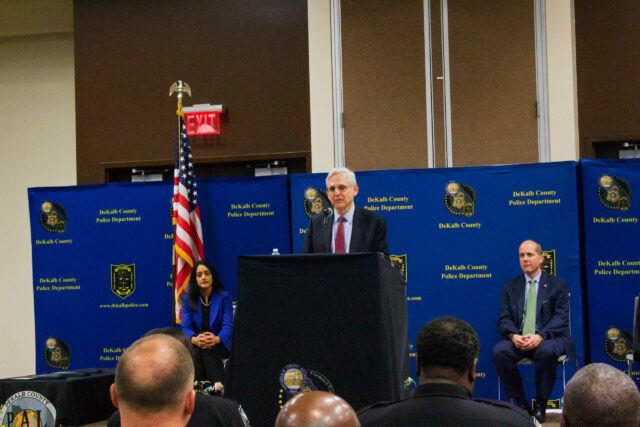 This year, the U.S. Justice Department received hundreds of nominations and selected 18. From those 18 winners, three were from the DeKalb County Police Department.

The Attorney General’s Award recognizes individual state, local, Tribal, and territorial police officers, deputies, and troopers for exceptional efforts in community policing. The awarded officers and deputies have demonstrated active engagement with the community in one of three areas: innovations in community policing, criminal investigations, or field operations, according to a press release.

Ricketts has been with the department since 2005 and has been an active member of the PAL unit for several years. Growing up, he was a youth member of the New York City PAL program.

“I know [what it’s like] sometimes being able to have a safe haven, a gym that you can go to. I know what sports can do for you and the things that you can get out of it,” he said. “All those things matter, so to have an opportunity was a dream to be able to join PAL and continue to give back.”

Ricketts said the award wasn’t so much a recognition for PAL, but all the community partners that have supported the program.

He added, it was amazing to be chosen out of all the nominees. When the officers were putting the programs together during the pandemic, they weren’t thinking about anything like the Attorney General’s Award for Distinguished Service in Community Policing.

“We got a lot more work to do, but it’s amazing to get the acknowledgement,” Ricketts said. “It means that we’re in the right direction.”

PAL will continue to reach youth through different programs and ways and reach them at their level.

Webber started working with the department in 2006 as a patrol officer. She later became part of the department’s interactive community police team and a detective in the special victims unit. Webber was also a youth member with the New York City PAL and took her first dance lesson with the program.

Inspired by her love of dance, Webber created a program to teach kids ballet, African dance and contemporary dance, providing youth with a way to express themselves freely and openly while interacting with police officers.

“At some point, all of us had a mentor. All of us had someone that we looked up to on a regular basis. That was it for me,” Webber said. “I wanted to be that mentor to some of these young women and young men and just make life that little bit of sunshine.”

Prather joined the department in 2007 and created a mentorship program for high school students. Through the program, students are able to form relationships with law enforcement officers that are based on respect and trust. She also coaches the PAL cheerleading program.

“I’m taking what was taught to me and putting it back into the community,” Prather said.

Garland said the work they do would be reason enough to honor the detectives, but when the pandemic began and schools shut down, “they only upped their game.”

“When the pandemic threatened to leave at-risk youth with no summer programs, they implemented a Virtual Summer Academy that connected participants remotely,” Garland said.

The officers partnered with teachers, community leaders, businesses, coaches, entrepreneurs and nonprofits to get the program going.

“I want to underscore that these actions would have been tremendous during the best of times,” Garland said. “They occurred though, during a pandemic. And the fact that they did is further evidence of their commitment to the community they serve.” 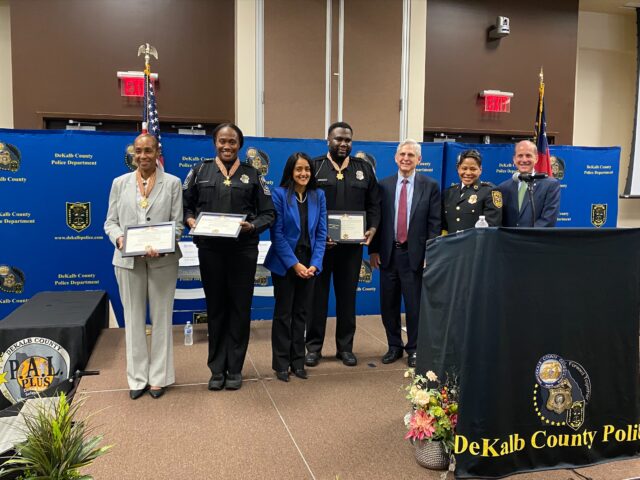