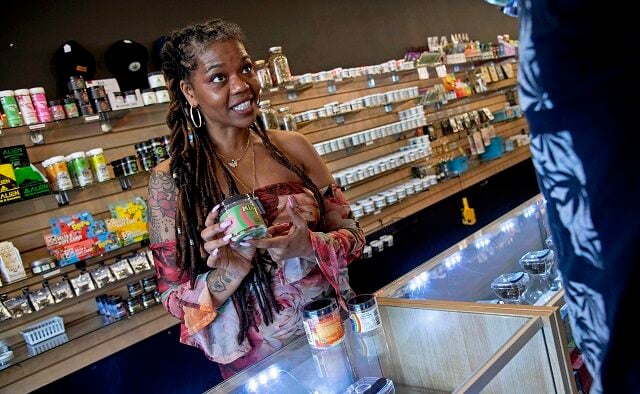 Stone Mountain, GA — There are signs that cannabis prohibition may be untenable long-term.

One of the most glaring issues is the widespread availability of a legal THC product that produces a high similar to the product sold illegally.

Many stores are offering Delta-8 THC products throughout Dekalb County. The drug is currently legal in Georgia, according to both a 2018 federal Farm Bill and a similar 2019 Georgia law that legalized hemp growing. Since then, the Delta-8 market has taken off in the metro Atlanta area. But in January, Gwinnett District Attorney Patsy Austin-Gatson said that possessing or selling Delta-8 is a felony in Georgia.

Then, last month, a multi-agency law enforcement task force raided a Gwinnett County smoke shop and confiscated around $2 million in Delta-8 products, CBS 46 reported. Now, two Gwinnett shops are suing the DA state of Georgia and seeking a judge’s declaration that the product is, indeed, legal in Georgia.

Judge Craig Schwall, a Fulton County Superior Court judge, issued a restraining order in mid-March that prevents the Gwinnett DA from taking any further action on the ban for thirty days.

“I have concerns that this may or may not be a rogue DA,” Judge Craig Schwall said, according to the Atlanta Journal Constitution.

The state Attorney General, Chris Carr, then petitioned the court to set aside the temporary restraining order because his office was not given five days’ notice of the hearing, a requirement under Georgia law. Under the Gold Dome, Republican state senator Jeff Mullis introduced a bill that would have declared Delta-8 legal under Georgia law. However, the bill went nowhere, not even getting a hearing in the Senate Health and Human Services committee.

So far, no such enforcement actions appear to be afoot in Dekalb and Delta-8 is doing a brisk business.

Padron faced resistance from the Avondale Estates police force when she first opened the store in 2017. She said the police would sit outside and watch what was going on. Padron responded with greetings and education and now describes a generally congenial relationship with the police.

“I love Avondale,” says Padron. “I pay taxes in the city.”

But “the Gwinnett County situation is very concerning,” said Padron.

“As for Delta 8 being illegal in Dekalb it could always happen…anytime,” Padron noted.

Padron said she’s constantly checking to ensure she’s not running afoul of the law as the legal ground under her shifts and changes.

“Because it is still a young industry the rules are changing all the time and the business owners have to adapt quickly to the unstable terrain of the journey into cannabis legalization,” she said.

Owners must figure out “how to stay ahead of all the curveballs thrown at us by the state,” Padron added.

Padron’s clients include many professionals, like doctors, psychologists, teachers, and court clerks. They tell her they use Delta-8 or THC to deal with “a lot of anxiety in the workplace.”

Others come in because they are dealing with chronic pain and want to find alternatives to opiate painkillers.

Padron wants to see us get to “a place where we change the conversation [around marijuana] from a drug to a prescription.”

Padron says she is careful with her sourcing and connects directly with many of the manufacturers and farmers who produce the products she sells.

Store manager Rutoyn Williams says that her clientele is diverse. It includes those suffering from chronic pain, including law enforcement officers who want to get the cannabis products legally.

As if to prove Williams’s point, a woman who lives nearby but did not want to share her name walked in to purchase Delta-8 products.

“It helps me sleep,” the customer, a senior citizen, said.