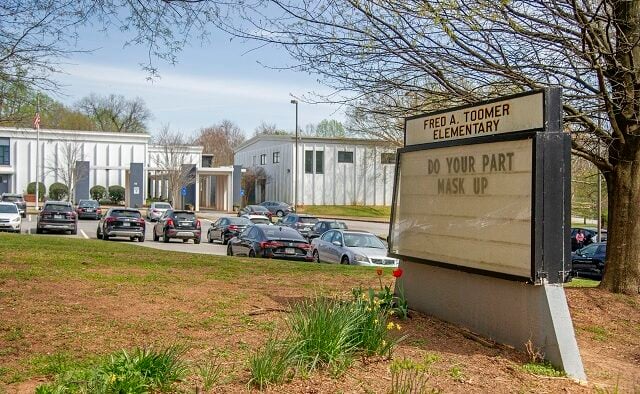 APS is still planning a $13 million renovation of the school.

After questions and concerns from several neighborhoods in the area, a PTA meeting was held with district officials at Toomer on March 24. APS sent around 10 representatives from both the school system and Sizemore Group, the consulting agency used in the current Facilities Master Planning session.

Taylor Cross, Kirkwood resident, educator, KNO education chair, and father of three, was in the room and sent Decaturish a summary.

“The community pressed the district as to why the recommendation has changed from a renovation and expansion, to just a renovation,” Cross said. “Points were made about the historic disinvestment that the district has made in neighborhood schools in the area like school closings, and investments in non-traditional schools, and how this recommendation represents more disinvestment in neighborhood schools.”

The attendees requested clarifications about why the recommendation changed if the consultant group determined the neighborhood continues to grow. Cross said the answer was that enrollment had changed in the past couple of years compared with previous trends. The parents questioned the use of data obtained during a pandemic to make the decision and said the school has made progress. Academic achievement has improved, and the neighborhood is buying in to the school, parents said.

“It’s a really big deal. Very few schools in the United States and in the world have a designation like that,” Cross added. “It also completes the triangle, so to speak, because King Middle School, which Toomer feeds into, is already authorized as IB Middle Years Program school, and Maynard Jackson is an authorized International Baccalaureate Diploma Program school.”

Cross said APS officials told the attendees that the renovation would make Toomer “state-of-the-art” and that they had not made a final decision. They said they would collect more data before making that decision.

Cross said APS told the neighborhood that they feel Toomer won’t be able to absorb the growth on the city’s east side, which upset attendees.

“It’s inconceivable for many of us,” Cross added. “If our neighborhoods are slated to grow, how can the most inclusive, available school that’s intended to represent the entire neighborhood not be expanded to allow for that growth?”

“Basically, Toomer will still get a renovation – a much needed renovation,” Olympiadis said. “If there is a need for expansion, [APS] Facilities completely listened to the community, as did the consultants, in understanding that they’re happy to develop a renovation plan that considers expanding the facility, if needed.”

Cynthia Briscoe Brown, at-large representative for Seat 8 on the Atlanta Board of Education, said that data and predictions from the Sizemore Group have allowed the school board to look at questions of capacity, enrollment, construction, and renovation in a holistic way that will give every kid attending APS what they need.

“[Sizemore Group’s] recommendation was that we not expand at Toomer, but that we do a renovation,” Brown said. “They believe that sufficient capacity exists if we implement the other recommendations that we’re discussing as part of that process.

“This whole Facilities Master Planning process I think is going to yield better results for every single child, rather than focusing on individual trouble spots. Being able to tie all of these issues into that process…gives us a chance to really make sure that everybody gets what they need.”

According to Olympiadis, APS doesn’t see a need to expand Toomer with current availability at other schools, such as Whitefoord. (Whitefoord is now a Pre-K.) In addition, APS has considered reopening East Lake Elementary and redrawing district lines to Burgess-Peterson before justifying an expansion at Toomer.

“If we need to expand Toomer, we have the opportunity to expand. And when I say that…[Education Special Purpose Local Option Sales Tax]  is very flexible. While we are taking this off the next five year ESPLOST doesn’t mean that it can’t come back on if it needs to.”

Neighbors are wary of plans to pull back on Toomer due to the prior actions of the Atlanta school district. East Lake Elementary, Coan Middle, Crim High, and Whitefoord Elementary (now a pre-K facility) have all closed over the past 20 years.

Councilmember Bakhtiari has heard several concerns from community members about the historic loss of their public schools – and they don’t want to lose Toomer.

“They want to see that investment in Toomer. They want to see the expansion that was promised now rather than in five years because to the community…they feel that there has been a consistent disinvestment in the public educational system and in the APS educational system, in this specific area,” Bakhtiari said.“They feel that the lack of investment is only going to further condition other parents and other people in the community to disinvest.”

About 13 years ago, Tris Sicignano became one of the original founders of the East Lake Schools Coalition. At the time, East Lake Elementary and Coan Middle were still open, but Sicignano saw parents leaving the community due to concern about the neighborhood schools.

“So, we rallied together. People started to send their kids to these schools more at the same time, and Kirkwood was doing the exact same thing,” Sicignano said. “I think the momentum just all happened at the same time.”

The community got together, raising money and dedicating volunteer efforts to the neighborhood schools, adding things like a garden at East Lake Elementary.

Then APS closed East Lake Elementary. Sicignano said the closure was a surprise to the community, done “without letting us come up with an action plan or put our efforts toward Toomer.”

“My feeling has always been that APS has left us kind of spinning our wheels without including us in decisions. And proof of that is Toomer Elementary School needs some additions,” Sicignano said.

Sicignano said the community has compromised, waiting for APS to fulfill its promises to the neighborhood schools that serve Kirkwood, East Lake, and Edgewood.

“They’re constantly scaling back the work that they’re going to do on Toomer Elementary,” Sicignano said. “In the same time that they have disinvested in our community, they have built Spark Elementary School. They have redone Howard and moved the kids over. They have done a lot of work on Grady, and they’ve done a lot of work on Jackson. They have left our communities full of empty buildings, while simultaneously not investing in the buildings that we do have. And when parents are looking around at their school options, and APS seems less than interested, it doesn’t bode well.”