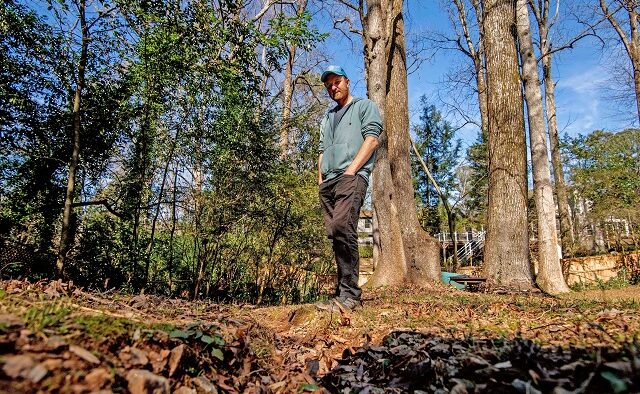 David Matysiak stands near the channel he dug in his backyard to help route rain water away from his house. Photo credit: Dean Hesse
Share

Greater Decatur, GA — On rainy days, Jen Dalmy watches the street in front of her house with a particular feeling of dread.

The Forrest Hills resident knows that even a moderate downpour is likely to send overflow from the nearby county-owned stormwater creek cascading across the road and through her front yard.

“We are not in a flood plain. This is not supposed to be happening,” she says of the home on Forrest Boulevard she’s owned for 20 years. “I know, in light of everything that is happening in the world right now, it seems minor. But this should be an easy fix. If the county would just maintain their property, this would be solved.”

Years ago, the county constructed a stormwater drainage creek on the opposite side of Forrest Boulevard that is supposed to channel storm runoff into a pipe running under the street, underneath her front yard, and into another ditch that eventually empties into the branch of Shoal Creek near Legacy Park, Dalmy says.

The county has an easement that allows it to maintain the pipe and a storm drain on her property.

But leaves, tree limbs and other debris from an empty lot next to the drainage creek have blocked and damaged the pipe running under the street. It has been leaking for years, creating a sinkhole around a county-installed drain in her yard.

This past summer, the county repaved the road raising it inches above the curb, so that any street runoff runs into yards instead of the gutters and storm drains. 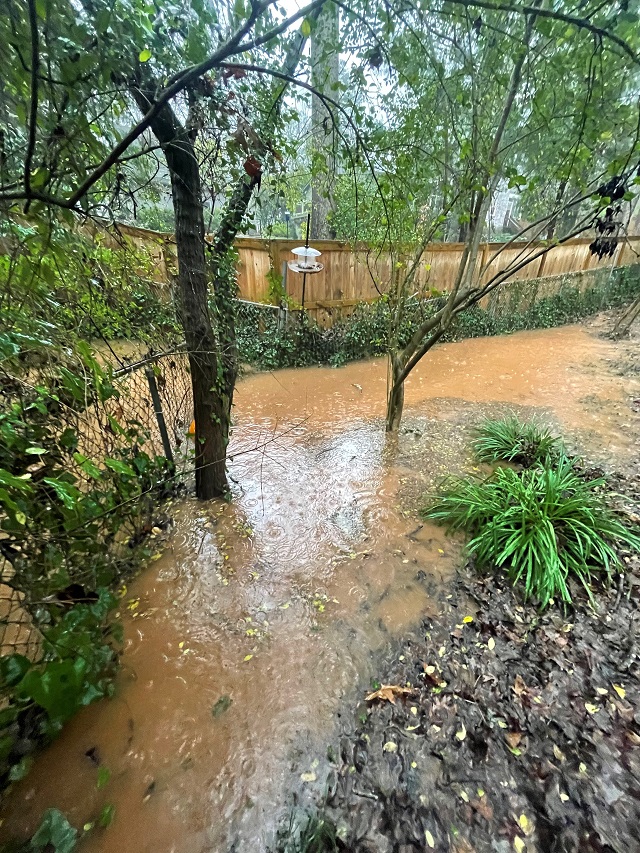 Repairs and maintenance often take months of repeated calls to her county commissioners and the county roads and drainage department before anything is done, Dalmy says.

Recently, a crew just spent five hours clearing debris in the creek, which alleviated the immediate concerns, but they still have not addressed the documented issue with the lack of curb and the sinkhole around the drain.

“We have had people from the county come out and say, ‘Yes, this is a problem.’ And they mark the road and put in a work order and then nothing happens,” Dalmy says.

Dalmy is just one of a number of DeKalb residents who say that aging and poorly maintained stormwater infrastructure is causing damage to their property.

Around the corner from Dalmy, homeowner David Matysiak watches the weather forecast so he can make sure everything in his backyard is out of harm’s way.

“It’s hard to visualize it, unless you are here when it happens,” he says. “But it’s like a river – a fast moving river – when it happens. And it doesn’t come from the street down hill, the water comes from the side, from Sussex [Road] into the neighbor’s back yard and through here.”

Just after they moved into their house on Wiltshire Drive, flooding washed away all of his daughter’s toys, Matysiak says. And when the stormwater takes things away, it gives strange things back.

“Last week, I found somebody’s New York Times in the back by the fence,” he says. “My wife and I joke about it whenever there is heavy rain, like, ‘What is the river going to leave for us today?”

Questions about who is responsible for the stormwater drainage in the area complicate the issue. Dalmy’s house is in unincorporated DeKalb, while Matysiak’s house on Wiltshire is inside the city limits of Avondale Estates, as is all of Sussex Road.

“Is it an issue with the [infrastructure] in Avondale or is it DeKalb County?” Matysiak asks. “Who knows? And I really don’t want to turn this into an Avondale versus Forrest Hills thing. I don’t want someone to show up and fix the problems at my house if it makes it worse for my neighbors in Forrest Hills.”

Avondale Estates took over management of the stormwater infrastructure inside its city limits from the county in 2004.  Last year, it finalized a Stormwater Master Plan to establish priority areas for repairs and infrastructure. The area of Wiltshire, Sussex, and Forrest Hills is not identified as a priority in the plan.

As part of the master planning process, Avondale Estates completed an inventory of its stormwater infrastructure, says Assistant City Manager Paul Hanebuth. Neither the inventory nor recent site inspections of the nearby infrastructure inside the city limits found any deficiencies.

“Storm water is collected from Sussex through two catch basins near the southern end of that street, and a minimal amount of water from Wiltshire combines with it at [a] junction box,” Hanebluth tells Decaturish. “The water then flows down a fairly steep grade through private property and out of the city.”

There is a headwall – a concrete structure that anchors the opening of drainage piping – that empties into an open channel in unincorporated DeKalb, he adds.  The city suspects that the outlet of this open channel is blocked, causing water to pool significantly just west of the city limits, but Avondale is prohibited from doing maintenance on infrastructure outside its jurisdiction.

DeKalb County is beginning the process of developing its own stormwater master plan and the issue of stormwater runoff and point-source pollution identified as key areas in its recent 2021 update to the county’s comprehensive plan.

Arcadis Engineering, the engineering consultants who are developing the plan for the county, are currently in the process of creating an inventory of the existing stormwater infrastructure and conditions, says Rick Lemke, Director of Public Works for DeKalb County.

“The intent of the study is to identify and prioritize areas of concern, capital project needs and stormwater operational costs for the county.  It is anticipated that the study will address needs for surface water collection, operation, and maintenance, with an eye towards accommodation of both existing and future needs,” Lemke says.

In addition, hydrological modeling will help the county become more proactive in solving drainage issues, rather than only reacting to existing localized problems.

And the study will determine the additional revenue that will be needed to make improvements, Lemke adds.

He estimates that the master plan will take between 12 and 18 months for completion.

Aging stormwater infrastructure is not just an issue for DeKalb County. It is a growing national problem. The American Society of Civil Engineers (ASCE) estimates that urban flooding causes $9 billion in damages annually and is a major source of contamination of U.S. waterways.

The 2021 ASCE report, “Report Card for America’s Infrastructure” paints a bleak picture for metropolitan areas that are facing increased demands for stormwater management.

Approaches to dealing with stormwater have changed significantly in the years since many of Atlanta’s suburban neighborhoods were developed, says Mickey O’Brien, landscape architecture and urban design manager at AECOM in Atlanta. AECOM is an engineering consulting firm that has worked with cities and across the country in the metro area on stormwater management projects.

O’Brien is careful to note that he is not commenting on any specific situation in DeKalb County or metro Atlanta, but on trends occurring nationally.

“The old paradigm was primarily focused on flood control and dealing with larger rain events, with water quality not as high on the list, “O’Brien says. “While flood prevention is still a priority, water quality is now also a priority, as is utilizing natural systems to infiltrate the storm water into the ground subsurface, which helps clean and replenish the aquifers we need to survive.”

While homeowners may be looking for larger storm drains and pipe systems to divert stormwater runoff from their yards and basements, local governments are looking at ways to reduce runoff in the first place, he says. In some cases, this will mean shifting some burden of managing stormwater off the public drainage infrastructure to individual properties.

To avoid runoff from parking lots and large buildings getting dumped into a stormwater pipe, which then flows to a creek or river – or a neighbor’s front yard – the idea is to collect it at the point of origin and allow it to be filtered naturally back into the natural environment, O’Brien explains.

“This is not possible in every situation. Of course, drainage culverts and pipes are still going to play a role,” he says. “But they are now only part of a more multifaceted approach.”

For example, as cities get more dense and home sizes get larger, local governments are placing limits on the amount of impervious (hard) surfaces that can be built on a single lot. Many are adding policies enforcing tree canopy, which provides tremendous value in offsetting storm water runoff, O’Brien adds.

If a builder or homeowner wants to exceed that prescribed percentage, and/or remove existing tree canopies, they must abide by the policies set forth in their city or community to mitigate their proposed additional impervious surface and tree removal needed for their improvements.

As for the removal of tree canopies, if the owner or developer cannot replant or replace the tree canopy on their property, they must contribute to a tree bank which is then used to replant trees within other areas of the city to maintain and or increase the tree canopy which is vital to offsetting storm water runoff O’Brien says.

Property owners can take the initiative themselves – particularly if they know that water will drain from their property onto neighboring ones – to implement some low-cost strategies to help slow, retain and infiltrate runoff.

Sometimes it can be as simple as adding gravel underneath the spot where your downspouts empty.

“Or, you can install plants and a rain garden to better slow that water down before it drains off your lot,” O’Brien says. “For people [in houses] at lower elevations and at the bottom of the hill, they often bear the brunt of the drainage and erosion. It is important to be good neighbors if we are at the top of the hill, everyone can do their part.”