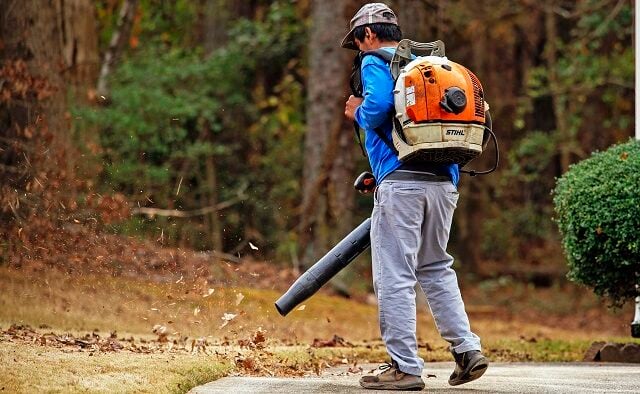 Atlanta, GA — The leaf blower bill in the state legislature is back, state Sen. Elena Parent (SD 42) said during a virtual town hall event on March 24.

City officials in Decatur have been paying close attention to House Bill 1301 in the state legislature, that would’ve prohibited counties and municipalities from creating local regulations that create different standards for or distinguish gas-powered leaf blowers from similar equipment.

While that bill has not been introduced on the floor of the state House of Representatives for a vote, it has been added to HB 1382, which passed the House on March 15. The bill made it out of the Senate Committee on State and Local Governmental Operations on March 25 and the language about leaf blowers was added in a substitute to the bill.

The bill would require directors and members of a governing body or development authority to attend and complete at least eight hours of training on development and redevelopment programs within the first year of their appointment.

After that first year, directors or members would be required to also complete at least four hours of continued training on development and redevelopment programs.

Now, added to that bill is the preemption of regulations on gas-powered leaf blowers.

“The leaf blower bill has been attached to a bill in the Senate [Committee on] State and Local Government Operations, and now that falls on me because I have been reached out to by the entire Decatur City Commission and mayor to say ‘get this stripped out.’ I am on the case,” Parent said. “They snuck it in on another bill that, to me, looks very unrelated.”

Decatur Mayor Patti Garrett told Decaturish that HB 1382, as it passed in the House, was supported by cities and the Georgia Municipal Association before the language about leaf blowers was added. Cities and GMA did not support HB 1301

“It is always disappointing to see a bill that cannot stand on its own merits then tacked on as an amendment to an unrelated bill,” Garrett said. “I am hopeful that the amendment will be removed when the Bill comes back to the House for consideration.”

In other business, during the town hall, Parent discussed a variety of other issues with state Reps. Becky Evans (D-Atlanta) and Mary Margaret Oliver (D-Decatur).

A big topic of discussion during the legislative session has been mental health and the mental health parity bill Oliver is working on with Speaker of the House David Ralston and Rep. Todd Jones (R-South Forsyth).

“The bill is 77 pages, and it is comprehensive to address financing of mental health in Georgia, enforcement of federal and state parity laws that have been passed since 2008 but have not been enforced…,” Oliver said. “It creates opportunities for professionals in the mental health field or a variety of allied mental health fields to have their education loans cancelled.”

The bill also requires managed care organizations to spend 85% of the premiums they receive on direct medical services. It creates new programs and funding for co-responder programs for law enforcement and assisted outpatient treatment.

The state legislature has also looked at constitutional carry for guns, which would allow permitless gun carry in the state.

Throughout the session, the education committees in the House and Senate have been busy and problematic, Parent said. Both chambers have dealt with bills that would ban the teaching of “divisive concepts” and Senate Bill 377 passed the Senate on March 11 and HB 1084 passed the House on March 4.

“It’s very disturbing that these bills were passed,” Rep. Evans said. “What the bill sponsor says is it will stop extremists on either end. People who say America is still racist, and we hate America. He feels like that voice is being heard too much.”

In other education-related legislation, Gov. Brian Kemp is expected to sign the Unmask Georgia Students Act on Tuesday. The bill allows parents to decide whether their kids will wear masks in schools.

“We’ve been in this pandemic for well over two years now, going into our third year, we’ve got to continue to move back to more normal operations,” Kemp previously said. “This policy will read in the law that parents have an opt-out, so it does allow the school system to continue to deal with the business of running the school. The parents will have the opt-out on whether to mask their children in the classroom or not.”

If a school district already has a mask mandate in place, the legislation would require the school system to give parents the option to opt their child out of the mandate.

“We’re seeing the effects of the primary, and they’re not good,” Parent said. “This bill started off as basically only a messaging bill because it was going to sunset in one year. But then on the floor, they amended it to have it sunset in five years. What that means is that no matter what happens, what new variant, what new pandemic, what new public health crisis, a school system would not be able to require masks.”

The legislature is continuing to discuss voting legislation. House Bill 1464 would empower the Georgia Bureau of Investigations to investigate election fraud allegations and enable public ballot inspections, according to the Atlanta Journal-Constitution.

“One of the main thrusts of it is giving the GBI authority to investigate alleged elections law violations, in addition to the Secretary of State’s office and the GBI would have subpoena power, which some feel would be intimidating to voters, and also sort of as another thing coming out of the misinformation and lies related to Trump claiming he won the election,” Sen. Parent said.

The bill also would require private organizations that wish to provide funding to help administer elections would have to seek approval from the state elections board.