Sinkhole opens under railroad bridge on Pangborn Road, and neighbors say it’s not the first time

Sinkhole opens under railroad bridge on Pangborn Road, and neighbors say it’s not the first time 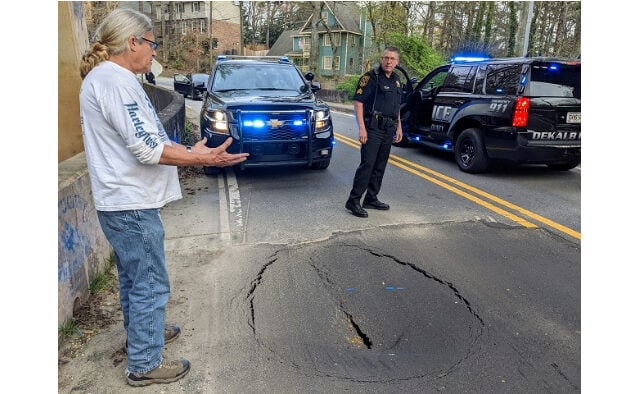 Greater Decatur, GA — Around 7 p.m. on Wednesday evening, people gathered to view a sinkhole that had opened in the 2700 block of Pangborn Road underneath a railroad bridge.

DeKalb Police Officers were on the scene to babysit the hazard. A bicyclist or motorcyclist traveling along the curvy two-lane road could’ve been seriously injured if they’d hit it. People in vehicles would screw up their alignment, and the thought of accidentally hitting the sinkhole could cause a backache.

Wade Vickery, a resident of the Rehoboth neighborhood for more than 20 years, stood along the sidewalk wearing his Harley-Davidson t-shirt, his long gray hair pulled back into a ponytail. It was not the first time a sinkhole appeared on that patch of road, Vickery said. The newest sinkhole was surrounded by a black patch put in place by the county to cover up the prior sinkhole.

“You don’t have anything supporting it underneath,” Vickery said, explaining the situation to the DeKalb County Police Officer examining the crack at the center of the sinkhole. “You’ve got to put some support under it. … I don’t know how I would get under there and do it.”

A short time later, neighbor Charles Allen joined Vickery on the sidewalk. “Finally went down, didn’t it?” he said. He wore a buttoned shirt and had short gray hair, and, like Vickery, he’d lived in the neighborhood for years, though they hadn’t met before.

After studying it some, Allen said, “It’s worse than it was the first time.”

“It’s gonna stay worse until they get underneath it and prop it up,” Vickery said.

“They need about a truck load of concrete in there,” Allen said.

“Well, you put concrete on top of that and guess what? A year from now, it’s gonna sink right back down again,” Vickery said. “You’ve got to have some support underneath it.”

“There’s no doubt about that,” Allen agreed. 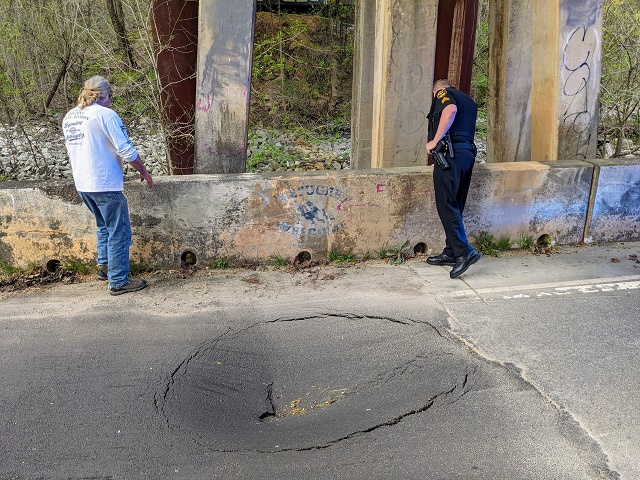 Wade Vickery and a DeKalb County Police officer look at the creek running underneath Pangborn Road. Photo by Dan Whisenhunt

Both men kidded that if you looked into the creek far enough, you’d start to find bodies.

“You know what’s weird is these little bastards getting up here and spray-painting this damn bridge,” Vickery said, motioning toward the graffiti on the train bridge. “They ain’t got nothing better to do. They’re good artists. But they ain’t got nothing else to damn do. And if I catch ’em, I’ll have ’em locked up.”

Allen laughed, and said the graffiti artists should come back with a pressure washer. He asked Vickery if he was in the neighborhood when CSX rebuilt the bridge. Vickery said he was.

Vickery said when he moved in 21 years ago, the curvy road was a dangerous place to walk, but he walked it anyway, getting neighbors to sign a petition that he gave the county.

“I went up to the commissioner, she says, ‘Honey, I don’t have any money.’ I said, ‘Well, somebody’s gonna die, and here’s your petition.’ Bam! Walked out,” Vickery said. “Guess what? A year later, they came in here, and they started putting in sidewalks, they built that wall in front of my house in one day, and we got it done.” 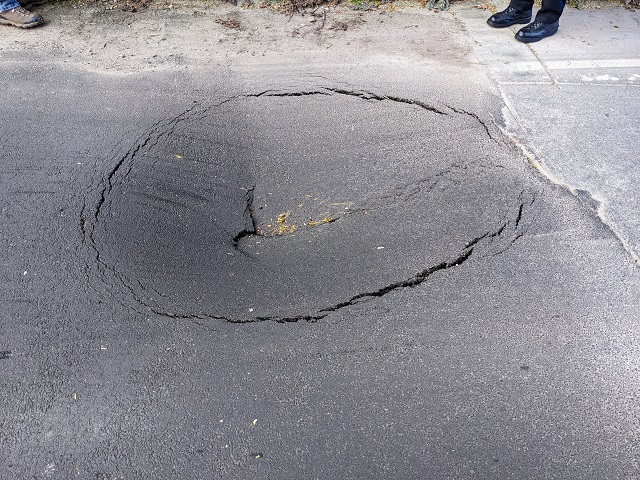 A sinkhole appeared on Pangborn Road on March 30. Photo by Dan Whisenhunt

It seems certain the county will be working on the road again soon. A message to county officials was not immediately returned.

Before Allen left the scene, Vickery stopped him.

“That lady that used to cut the grass up here on Lavista [Road] with that lawn mower,” Vickery said. “What happened to her?”

Vickery said, “Well, we all damn old, but did she die or is she laid up?”

“Well, I’m gonna tell you, she was an angel for this place,” Vickery said. “You know, we all need to give her a thank you, you know?”

“She worked out there every day,” Allen agreed.

“That lady cut grass up here on Lavista Road for 20 years, pushing a lawn mower on property she didn’t even own or have anything to do with,” Vickery said. “You know what? She was doing God’s work.”

“She was a sweet lady,” Allen said. 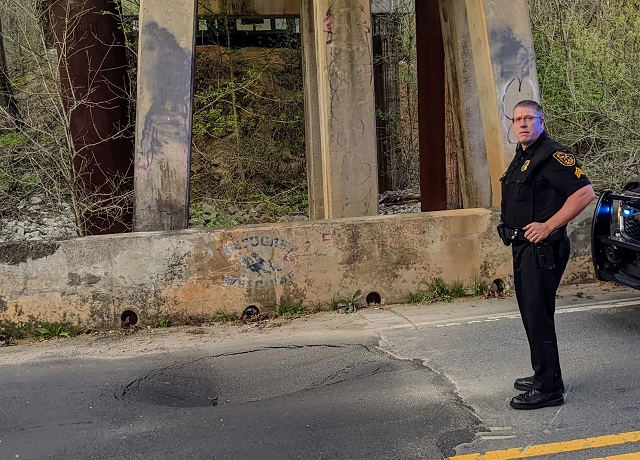 A DeKalb County Police officer stands near a sinkhole on Pangborn Road. Photo by Dan Whisenhunt

Update: As of March 31, the county has covered the sinkhole with a metal plate and marked it with orange cones: 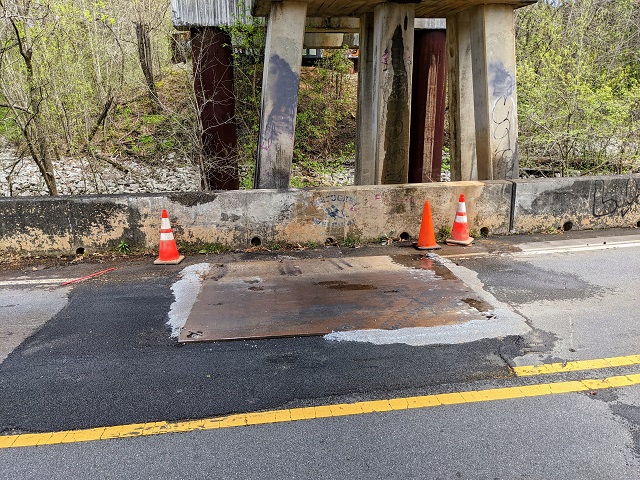