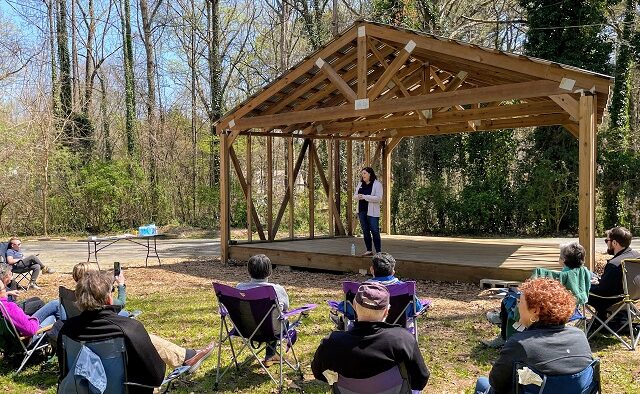 Tucker, GA — About 30 people gathered at a community engagement meeting held by Tucker City Council member Alexis Weaver at the Peach Pit on March 27, while kids played soccer and ran through the park.

Fitzgerald Field, located in District 3, was acquired by Tucker after the Parks Master Plan was written.

“We need to have the same kind of community engagement and community meeting around the future of this park, the same way that we did for all of our parks,” Weaver said. “That’s really important to me. How do we make sure that the neighbors adjacent to any park are engaged and understand about what the opportunity is? But also, what do we as a community say our vision for [Fitzgerald Field] is?”

The councilmember called for comments and questions about the city, beyond just her district. Neighbors asked Weaver about sidewalks on Lavista Road and Henderson Road, recycling pick up and  how the Chamblee Tucker Road diet would affect traffic.

Kuldip Kaur was stuck by a car and killed in 2021 while walking along Brockett Road, and Janet Pickney was struck while jogging and killed by DeKalb County police officer Ian MacGowan on Chamblee Tucker Road in 2017. Both events spurred the city of Tucker to address traffic safety.

“I’d rather have cars stacked up in front of my house all day long than have another person killed,” said a woman whose house is on Chamblee Tucker Road.

Weaver encouraged residents to utilize the public comment time at city business meetings, typically held on the second Monday of each month. The next City Council business meeting is April 11.

“I am always going err on the side of more input is good,” said Weaver.

Constituents were introduced to community partners Mike Filon of the Tucker Orchard Guild and Jamie Rosenthal of Roots Down.

“I love the idea of how we create places that are sustainable, and how we think about what the future of our communities are for when our children are older, as well as who’s enjoying it now. I’m excited about the possibility of these relationships and partnerships,” said Weaver, who earned an undergraduate degree in environmental studies at Baylor University.