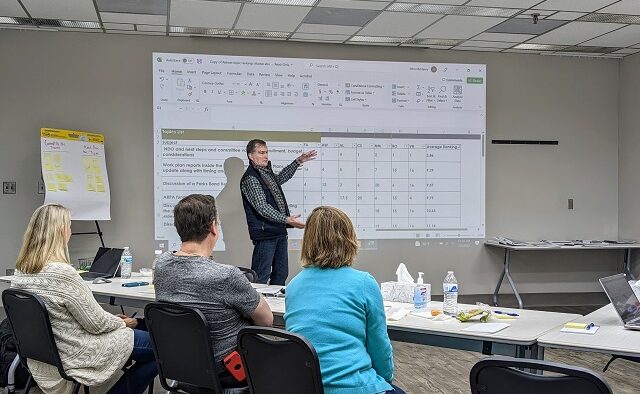 Norcross, GA — Mayor Frank Auman and the Tucker City Council along with City Manager Tami Hanlin met for a retreat March 5 to discuss priorities for the coming months.

One goal that rose to the top of the list was to follow through on creating a citywide nondiscrimination ordinance. City council passed a nondiscrimination resolution passed last October. Mayor Pro Tem Anne Lerner offered an update on the ad hoc committee that has already formed to create the ordinance. The committee will be seeking additional volunteers and feedback from the community to create the final wording for an ordinance.

“I have some concerns about using a committee to create an ordinance. I feel like that’s what we were elected to do, and that’s the purpose of public meetings,” said Councilmember Alexis Weaver.

Mayor Frank Auman responded that the committee can consult lawyers and members of the community to come up with wording for the ordinance that will work, and the text will then go through the full public meeting process.

One councilmember urged the city not to get sidetracked on the nondiscrimination ordinance, something that’s been discussed for years.

“I want a date on this. I don’t want it to get pushed back by other priorities,” said Councilmember Noelle Monferdini.

The city also discussed forming an inclusivity committee that would cover similar ground. That committee would stick around after the nondiscrimination ordinance is approved.

– Public works projects, including sidewalks, storm water projects, and roads were mentioned several times during the retreat. Lerner said that she felt it was important to include long-term maintenance in the city’s budget, and not count on DeKalb County to maintain projects after they are built.

“We’re adding inventory to a system that is already overtaxed,” she said.

Auman stated that the city gets a prorated amount of money from the county based on population for road paving, about $5 million per year.

– The topic of implementing a “complete street” policy also received attention. Complete streets are designed to be safe, comfortable, and accessible to everyone regardless of the mode of transportation they are using; they frequently include sidewalks and protected bike lanes.

Weaver said that existing recommendations in the transportation plan are not always being followed.

“The plan says that Brockett should be a complete street, but now we’re redoing Brockett and we’re not following the plan,” she added.

– Parks and trails, which Lerner described as “linear parks,” are an ongoing priority for the city. Lerner said that they were discussed a great deal during the cityhood meetings, including the eventual need for funding. Lerner stated that the city had received money from DeKalb County funds that the residents had previously paid into, but that the city would need to find its own ways to pay for park maintenance and development inside the city.

“I feel like a parks bond referendum is much more equitable than impact fees,” said Lerner.

Auman said that a bond referendum was a long process.

“If we’re ever going to do it, we need to start taking first steps,” said Auman. The city, which formed six years ago, has not held a bond referendum yet.

One possible beneficiary of a parks bond referendum is Fitzgerald Field. Auman said that the city was waiting to hear from a soccer team that is interested in using the location before deciding what to do with the park.

– The city still has American Rescue Plan Act funds available, and Auman reminded the council that ARPA funds have both restrictions on what they can be spent on and a deadline. He added that both the city staff and the previous city council had laid the groundwork for making final decisions about how to allocate remaining ARPA funds.

One of the areas that ARPA funding is aimed at is internet access. Broadband service and possible improvements were already a priority for Tucker, but the advent of the COVID-19 pandemic made it even more important.

“We need to be known as a place with great broadband service for everybody,” said Auman.

– The council discussed having city staff give updates on projects outlined in the Comprehensive Master Plan that include time frame and steps for the next 24 months. Periodic updates to the CMP are mandated by state law, and a new plan is produced every 10 years with public input. Ongoing updates allow the city to prepare for upcoming tasks as well as the need to prepare for information sent to the state.

– The city plans to review and consider revision of tree density requirements for residential and commercial developments and for land disturbance permits.

“A lot of people are upset about trees coming down, but don’t understand that we have to change the requirements,” said Weaver, adding that the consequences for breaking the rules weren’t very substantial. She added that replanting wasn’t always enough, saying, “You can’t replace a 100-year-old tree with a sapling.”

– The city plans to discuss the old site of Smoke Rise Elementary which has been sitting empty since the school moved. The city has not yet determined whether it should acquire the property or what it would do with it once acquired.

– Stone Mountain Inn is one of a few locations that are frequent sites of crime. The city plans to discuss choices for dealing with it. Auman said that if the city declares an area blighted, the DeKalb Urban Redevelopment Agency could intervene.

“Whatever our policy is, let’s make sure that it’s consistent,” said Weaver.

– Among its lesser priorities, the city plans to discuss the pros and cons of taking on services that it did not choose to provide when it was formed, including sanitation and police services.

Auman stated that most cities in DeKalb contract with the county for sanitation, and that one city decided to go back to county sanitation after having hired a private company.

Of police, he said, “I put that on there not because I’m advocating for it, but because we’ve never had that conversation.” Auman added that there is a mandated two-year process if the city ever decides that it wants to provide its own police services.

“This is not something that we can do quickly,” said Auman. Council members were willing to entertain a discussion of police services but without any strong consensus.