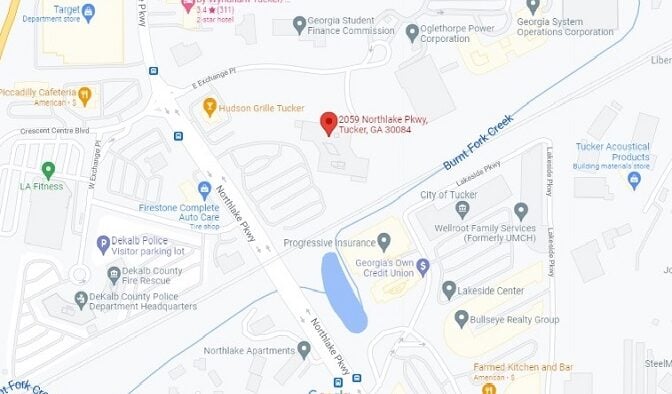 Tucker, GA — AHS Residential came before Tucker City Council on March 14 for a first read on the development of 500 units on 13 acres of land at Tucker Exchange, 2059 Northlake Parkway.

AHS is applying for a Special Land Use Permit (SLUP) to increase density and four variances centered on parking and access to the property.

The parcel currently contains one office building and surface-level parking. If approved, Tucker Exchange will have the third highest concentration of units in the city. East Ponce Village has 1,011 units on 94.9 acres and The Park at East Ponce has 722 units on 64.9 acres, according to city staff.

AHS Residential plans to build two 8-story buildings, a 9-story building, a connection to the future PATH trail and a swimming pool. The main building will feature two work spaces, one limited to the residents inside that building, and one open to residents from the rest of the property.

The one, two and three-bedroom units will be priced starting at around $2,000 per month. The shortest lease term is six months.

AHS Residential is considered a proponent of building workforce housing. Urban Land Institute defines workforce housing as livable space for a livable wage. It is housing affordable to those earning between 60% and 120% of area median income (AMI). Workforce housing is aimed at middle income workers, like fire fighters, police officers, healthcare workers and teachers.

Fifteen percent of total units will fall within 80% to 140% AMI.

Councilmember Virginia Rece asked about affordability of units outside of workforce housing.

“I’m curious about further having a tri-level of affordability, having a mid-range for folks that may not meet the AMI. The workforce housing. Somewhere in the middle where they can’t quite afford the top end,” said Rece.

“Affordable is 60% or below AMI and use vouchers and other payment mechanisms provided by the government,” said Webb.

City staff said although Tucker Exchange “meets the intent of the comprehensive plan in terms of primary land uses and development strategies, the massing, scale and density … does not comply with the surrounding area.” A parking deck, reduced unit count and integrating the work space into the units would better comply, according to city staff.

One resident spoke against the application.

“The traffic is going to be jammed. We have a lot of kids that come through there, walking, and we have five buses that come through that area,” said the woman who identified herself as someone who lives near Tucker Exchange. “’I’m able to run every morning and evening. I like the peace and quiet, and I want to keep it that way … This is my community and I like it just the way it is.”

“It might be a safety issue because of the grade and everything else, but we’re going to see [jaywalking] by a lot of people, especially if Bambinelli’s goes in there. It’s going to be easy to walk right out my front door and then run across the street real quick,” Lerner said.

The second read for Tucker Exchange will take place on April 11.