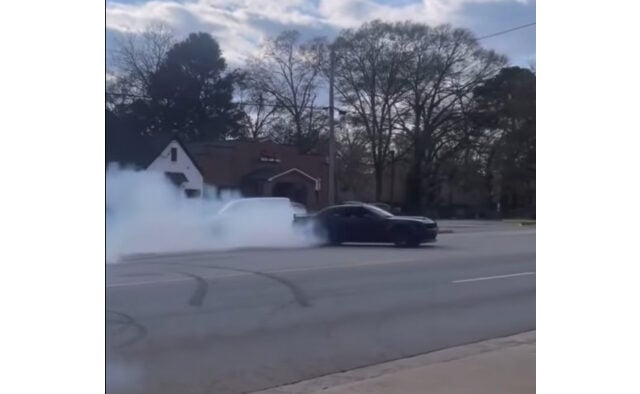 Decatur, GA — Georgia State Patrol has released new information about a police chase that ran through Decatur on Sunday, March 27.

“On March 27, at approximately 6:47 p.m., a Georgia State Patrol Trooper attempted to stop a Dodge Challenger for a window tint violation,” a spokesperson for GSP said. “The vehicle immediately fled and initiated a pursuit. The vehicle turned down a small backstreet and briefly stopped while two males jumped from the vehicle.  The vehicle then began to flee again, back out onto Candler Road to Memorial Drive. GSP Aviation followed the vehicle as it took multiple surface streets before turning onto 3rd Avenue where a GSP Trooper performed a [precision immobilization technique] PIT maneuver that briefly disabled the vehicle. The driver attempted to flee again; however, another Trooper’s PIT maneuver ended the pursuit. The driver and passenger were taken into custody.”

On March 29, the Georgia State Patrol provided additional information about the incident and said it resulted in the arrest of a drag racer with thousands of followers on Instagram. The GSP spokesperson said the DeKalb County Police requested the agency’s assistance.

“On March 27, Dekalb County Police requested assistance from the Georgia State Patrol in reference a large gathering of vehicles that had become a nuisance to a local convenience store on Candler Road,” a spokesperson for GSP said. “Troopers responded to the area as Dekalb County officers attempted to clear out the parking lot. Troopers observed a vehicle leaving the parking lot with illegal window tint on all windows. A traffic stop was initiated, and the vehicle immediately fled, causing a pursuit. The vehicle went down an alley way behind the convenience store, where two males jumped out of the passenger side door and ran on foot. The vehicle then continued to flee down several surface streets.  A PIT maneuver was executed a total of two times before bringing the pursuit to an end, where two people were taken into custody. During the search of the vehicle a pistol and a rifle were located along with marijuana. During the pursuit, the suspect struck another motorist at East Lake Terrace and Oakview Road leaving the scene.

“It should be noted that during the investigation of the driver, his Instagram page (@theofficialeli10) was located and shows videos of him performing burnouts and doughnuts recklessly in the roadway of Candler Road in front of the convenience store on the date of this incident.”

Here’s the video in question:

The driver was identified as Elijah Odom, 23. He was charged with “felony fleeing, reckless driving, speeding, hit and run, failure to maintain lane, passing shoulder of the road, stop sign, red lights, possession of marijuana, and window tint [violation].”

According to his Instagram Page, Odom plays football at Clark Atlanta University. The school’s website lists him as a quarterback for the team.

His 26-year-old passenger was not charged.

The PIT maneuver is controversial. In 2020, the Washington Post reported that the maneuver had led to 30 deaths since 2016.

“In a successful PIT, the pursuing officer uses the cruiser to push the fleeing vehicle’s rear end sideways, sending it into a spin and ending the pursuit,” the Washington Post reported. “But the tactic can have deadly consequences.”

In January, GSP’s use of a PIT maneuver led to a death in Catoosa County, News Channel 9 reported.