Avondale Estates Mayor Jonathan Elmore delivered the State of the City address on April 21 at the town green in Avondale. Photo by Zoe Seiler.
Share

Avondale Estates, GA — Avondale Estates Mayor Jonathan Elmore highlighted the development and projects that are happening in the city during his State of the City address on Thursday, April 21.

“For my introduction today, I would like to deliver a little three-part sermon on faith,” Elmore said.

One part of having faith was believing in the process of building the city’s new Town Green, the venue for Thursday’s speech.

“We had faith in the process and so today, I stand before you very proudly, but very humbly to deliver the 2022 State of the City in our new Town Green,” Elmore said as he became choked up. “It took a lot to get here.”

The project includes the construction of four-acres of the land. About two acres will be a park and the other two acres will be a market pavilion and a commercial solution. The site is located along Highway 278/ North Avondale Road between Lake and Oak Streets.

The city broke ground on the Town Green on June 30, 2021, and anticipates finishing the two-acre park and the market pavilion by the summer.

“By the end of the summer, the town green market pavilion will be complete at the corner of North Avondale and Oak Street,” Elmore said. “Our new town green is just one example of how we’ve transformed the city’s governance into a body that is action driven. Not only are we strategic with our planning, we are backing it up with results. We’re just getting started.”

The city will continue to work with Fabric Developers to work out the details of the town green commercial development. During the summer, the city is planning to host a concert series on Sunday evenings in June on the town green.

Elmore also highlighted the city’s financial position and said that Avondale Estates now has the largest financial reserves in the history of the city.

“Housing values are tracking 15-20% higher this year. Commercial property values continue to rise as new developments and businesses are brought online,” Elmore said. “For the first time in the city’s history, we have developed a long-term, multiyear capital program plan to address streets, sidewalks and stormwater improvements throughout the city that have been needed for decades.” 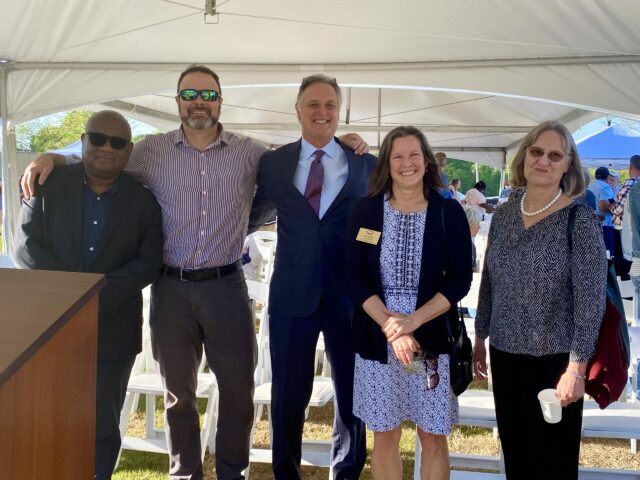 Another project the city is working on is the U.S. 278 complete streets project. Elmore described this as the most transformative project for the city. Avondale Estates city staff is working on securing the rights-of-way needed for the project to move forward.

“I like to think of this project like one of our Lake Avondale ducks swimming across the water,” Elmore said. “It might appear there’s little action taking place as it glides across the lake, but underwater there’s furious paddling propelling tremendous motion.”

The city has been working on the project since 2014. (t will improve U.S. 278 and includes a “road diet” that will reduce the five-lane road to three lanes between Sam’s Crossing and Ashton Place.

It will add medians, parking and a sidewalk for bikes and pedestrians.

The corridor will have a 10-foot pathway throughout, and a five-foot landscape zone will run between the sidewalk and the edge of the curb. The project will include repaving U.S. 278, re-striping the road and upgrading all the traffic signals.

Once the city acquires all the right-of-way, it will complete construction drawings, go out for bid and begin construction in early 2023. Construction will take about 18 months.

The city commission continues to tackle stormwater issues throughout Avondale. The board adopted the stormwater capital project priority plan in 2020 to address flooding and repair and maintain the city’s aging stormwater system.

“There’s no quick fix to these ongoing projects, but we now have a proactive, comprehensive stormwater management program that will help us get a grip on these issues,” Elmore said. “I’m excited to announce that work began this week on phase one of the North Woods project that will create a walking trail through the woods connecting the sidewalk at Berkeley Road to the lake trail that circles Lake Avondale.”

Phase two of the North Woods project will include repairs to the stream bank and installing three rain gardens that will slow and filter the stormwater that enters the lake.

One of the things Elmore is most proud of this year was the process the city manager undertook to hire a new police chief. The city partnered with the Georgia Association of Chiefs of Police to conduct the national search and an assessment for the candidates. The city also held stakeholder interviews.

Harry Hess, the assistant police chief in Clarkston, will begin his new role as the Avondale Estates police chief on April 26.

“He brings with him a commitment to community policing and a desire to reestablish and grow the trust in our police department not only within Avondale, but with our surrounding communities, and with the knowledge of DeKalb County that will enable him to hit the ground running,” Elmore said.

“Our residents have enthusiastically embraced this [recycling] program, and we’re proud to be the first city in the nation utilizing the most cutting-edge technology to close the loop on these hard to recycle items,” Elmore said.