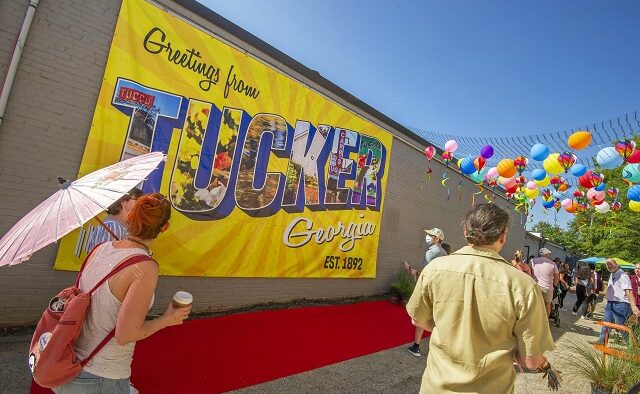 People check out the pop-up alley off Main Street during Tucker Day 2021 on Saturday, Sept. 4. Photo by Dean Hesse.
Share

Tucker, GA — Tucker-Northlake CID is working to promote public art in the city of Tucker.

Working with the city and Atlanta Regional Commission (ARC), Tucker-Northlake CID is helping to draft an ordinance for art in the alleys of the city’s downtown. It will be presented to the city council later this year, according to a press release.

Currently, public art is not permitted within the city. Sculptures installed before 2016, when Tucker became a city, are located in Northlake office parks.

The groups are re-envisioning downtown Tucker, designed in the 1890s with a network of streets and alleyways, as a place to dine, socialize and take in art. A Downtown Tucker Coloring Book with art contributed by local artists can be found at downtown businesses.

Tucker-Northlake CID has been replacing signposts in downtown Tucker with decorative signposts and signs. The intent is to expand the look and feel of Main Street. The project was initiated through a partnership with the Mainstreet Tucker Alliance, and grew to include Cowan Road and Idlewood Road to Tucker Middle School.

As senior associate vice president with Emory University, Willis works with metro Atlanta government officials and with business, community and nonprofit leaders on a variety of issues impacting Emory University and Emory Healthcare. She serves as executive director of the Clifton Community Partnership and president of the Clifton Corridor Transportation Management Association. Before coming to Emory, Willis worked in governmental affairs for 15 years in Washington, D.C., where she was a lobbyist for scientific research organizations, director of the Washington office for the state of Georgia and legislative assistant to a Georgia congressman.