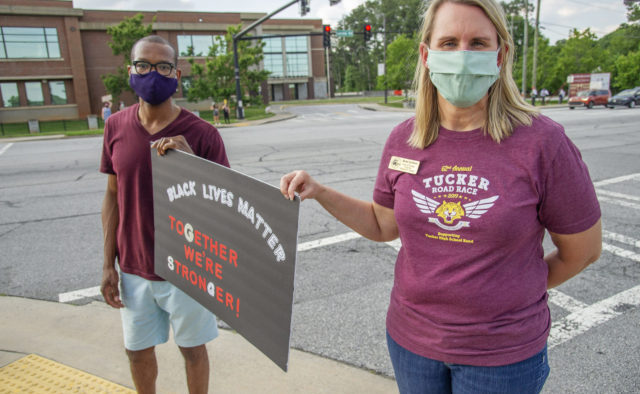 Tommy Boyd Jr. and City of Tucker Council Member Anne Lerner joined around two dozen other people in a peaceful protest in the City of Tucker June 2. Photo by Dean Hesse.
Share

An NDO working group has been assembled, Councilmember Anne Lerner announced at the April 11 City Council meeting. The group plans to make a presentation to City Council by the end of summer.

The resolution passed in October 2021 was the closest Tucker has come to an NDO, after years of residents begging for one.

“It is important to have a legally enforceable ordinance because a resolution is only a formal statement of the opinion of the city,” the group said after the city council passed the resolution. “After two long years of diligently answering questions and educating the mayor and city council members, it’s a testament to the power an election year holds that the Tucker Open Door community was able to make the non-discrimination ordinance a pivotal issue in our local elections. Over the last two years, we have emphasized that passing a non-discrimination ordinance is something our community supports. We now have a commitment to create and pass an NDO from at least one current council member, a mayoral candidate, and numerous candidates in each district.”

The group “volunteered their time and expertise to discuss the legalities around and ways to gain compliance around a welcoming community to live, work and enjoy, without fear of discrimination,” said Lerner.

– Andrea Bennett, an attorney and mediator who was involved with Georgia Equality and the city of Atlanta’s Non Discrimination Ordinance.

– Don Cirino, who has 33 years of experience working with the U.S. Department of Labor as an equal opportunity employment investigator, director of regional operations and director of internal human resources.

– Sandra Rice, Georgia Department of Behavioral Health and Developmental Disabilities and volunteer a Peter and Paul’s House in Tucker.

Additional members of the community will be added later, said Lerner.

“From that review and input, we’ll have some additional members of the community … they’re also working to gather the input of the diverse voices and viewpoints. It will be community members and organizations working on behalf of the people who are protected under resolutions and under ordinances,” said Lerner.

Lerner said stakeholders from real estate, hospitality and local business owners will make up the larger group. The final goal is to have recommendations presented to city council by the end of the summer.