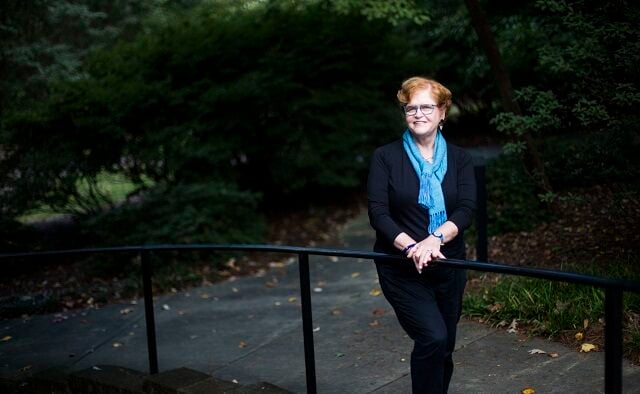 U.S. President Joe Biden announced Lipstadt’s nomination in 2021, and she was approved by the U.S. Senate on March 30.

“There is no person more qualified for this important role than Deborah Lipstadt,” said Emory President Gregory L. Fenves. “During a time when antisemitism is on the rise across the country and world, she is the leader our nation needs to help us overcome and transform hatred through her peerless knowledge, scholarship and expertise.”

Lipstadt told the Senate about a Jan. 15 attack on a synagogue in Colleyville, Texas, where a gunman held four people hostage.

“Senators, this was no isolated incident. Increasingly, Jews have been singled out for slander, violence and terrorism,” Lipstadt said. “Today’s rise in antisemitism is staggering. It is especially alarming that we witness such a surge less than eight decades after one out of three Jews on Earth was murdered.”

She praised the U.S. government for recognizing “Jew-hatred as a serious global challenge,” including by elevating the special envoy to the level of ambassador.

Lipstadt is known for confronting anti-Semitism when she was sued for libel in 1996 in the United Kingdom by Holocaust denier David Irving. While the years-long legal battle ended in a “resounding verdict” for Lipstadt and against antisemitism, she spent weeks in the courtroom “listening to a Hitler apologist spew Holocaust denial, antisemitism and racism.”

In 2021, Lipstadt served as an expert witness in the civil lawsuit against the organizers of the 2017 “Unite the Right” demonstration in Charlottesville, Va.

“For those extremists, who came to Charlottesville ready to do battle, neo-Nazism, racism and anti-Semitism are intimately intertwined,” she said.

Lipstadt said she expected the ambassador role to be difficult and demanding.

“When I was first asked to apply for it, I told an old friend that I doubted I would. Without hesitation, she said, ‘But you could make a difference,’” she said.

She is the author of “History on Trial: My Day in Court with a Holocaust Denier” (2006), which was made into the 2016 film “Denial,” starring Academy Award-winning actor Rachel Weisz as Lipstadt. Her latest book is “Antisemitism: Here and Now.”

Lipstadt will take a leave of absence from Emory to serve as special envoy. When her nomination was announced, she noted that should she be confirmed, “I will miss one thing: Being in the classroom with my Emory students.”

Jason Francisco, associate professor at Emory’s dept of film and media and affiliate of Tam Institute for Jewish Studies, published a new book, “Alive and Destroyed: A Meditation on the Holocaust.” Francisco published photo works and essays that wrestle with the afterlife of the Holocaust.

Francisco began creating “Alive and Destroyed: A Meditation on the Holocaust in Time” in 2010. With a large format camera and antique lenses, Francisco has journeyed between Berlin, Kharkov, Riga and Bucharest. He has collected images that carry the complications of remembering and forgetting in the places where events collectively known as the Holocaust occurred, according to a press release.