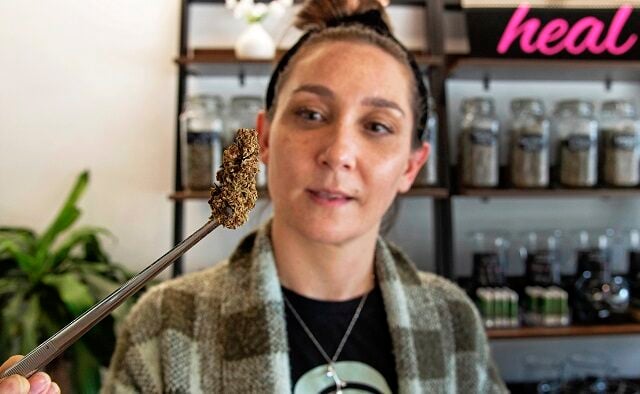 Pot’s current illegal status may come as a surprise to people in metro Atlanta, where cities have moved to decriminalize possession. But marijuana arrests are still a routine occurrence in DeKalb County. Nationally, marijuana arrests disproportionately target people of color.

The possibility of arrests hasn’t deterred marijuana use, however.

“If Stone Mountain had an official scent, it would be marijuana,” said Brooke Martin, co-owner of the downtown Stone Mountain store AARF Pet  Central.

Martin was referring to the frequent smell of the green herb being smoked on the town’s Main Street and all over DeKalb County.

The National Organization for the Reform of Marijuana Laws defines decriminalization as “no arrest, prison time, or criminal record for the first-time possession of a small amount of marijuana for personal consumption.” While many places have reduced penalties for possessing small amounts of cannabis, other places have embraced and profited from legalization.

Martin said the state’s missing out on revenue claimed by other states that have legalized the drug. Colorado, a pioneer in the cannabis legalization movement, reported receiving $423 million in revenue from marijuana sales in 2021.

“If it was decriminalized, regulated, taxed, and sold, it would be a huge moneymaker,” added AARF’s co-owner Susan Leisure. “We’re missing out…over some kind of antiquated moral code.”

But possession of even small amounts of the herb is still a misdemeanor in most of the state, including in Stone Mountain, Tucker, Avondale Estates, Decatur, and unincorporated DeKalb County.

Under state law, a person found with less than an ounce of marijuana could be charged with a misdemeanor, punishable by up to twelve months in prison and/or a $1,000 fine.

The widespread confusion is likely driven by decriminalization of marijuana in many other parts of metro Atlanta.

That includes Clarkston, just down the road from Stone Mountain. Clarkston was the first city in the state to downgrade punishments for the drug.

Blocking the pathway to poverty

Back in 2016, Clarkston’s city council unanimously decided to lower the penalty for possession of less than one ounce of marijuana to a ticket with a $75 fine.

After Clarkston downgraded the punishment, jurisdictions including the cities of Atlanta, South Fulton, Fairburn, Chamblee, and Savannah followed suit. (A list of jurisdictions that have decriminalized is available on the Reform Georgia website.)

Ted Terry – now a DeKalb County commissioner for Super District 6– was then the Clarkston mayor.

Terry said he was inspired to work for drug law reform after what he called a “dehumanizing” run-in with police officers when he was a young man just out of college.

“It is one of the best things we can do for our society…preventing someone from going to jail is worth it,” Terry said.

Current Clarkston Mayor Beverly Burks agrees. “The City of Clarkston helped reduce the chances of offenders going from the pipeline to prison and, ultimately, the pathway to poverty,” said Burks.

Like her predecessor Terry, Mayor Burks thinks the entire state should legalize possession of marijuana.

“Until the state updates its marijuana law, cities and counties in the Metro Atlanta Area should support similar marijuana ordinances. It would be great to have policy consistency in our area,” said Burks.

The City of Clarkston issued 10 citations for possession of less than an ounce in 2021 and 35 in 2020, said Mayor Burks. The $75 citations do not mar anyone’s criminal record.

“Clarkston doesn’t give people a hard time for just trying to get by,” said 42-year-old Sarah Jewell, a Clarkston resident who manages the Brockett Pub.

“The police focus on things that are actually causing hurt and pain,” added Jewell.

In Atlanta, as in Clarkston, marijuana possession of less than an ounce results in only a $75 ticket – not an arrest that would go on a person’s criminal record.

In 2021, the City of Atlanta issued 1,664 such citations under the Atlanta ordinance, according to data obtained via open records request to the city’s municipal court. So far this year, the city has issued 223 citations, according to the same data request.

And yet in other cities, marijuana prohibition remains in effect. 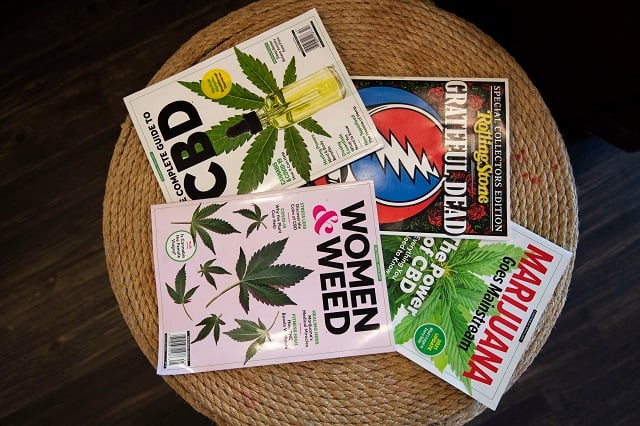 Magazines at Hemp Haven CBD Dispensary which is located at 2765 E. College Avenue in Avondale Estates. Photo by Dean Hesse.

“Less than an ounce we write a citation and more than an ounce we arrest depending on probable cause for intent to distribute,” said Stone Mountain Chief of Police Chancey Troutman, who recently announced he is retiring.

“I think it should be legal. It doesn’t seem like a big deal,” said David Morgan, a 32-year-old resident of the city of Stone Mountain.

Seventy-one percent of Georgians support legalizing cannabis, according to polling data cited by the Marijuana Policy Project in a new report.

Leaders of Tucker, Decatur, and Avondale Estates all said they had no immediate plans to consider ordinances to downgrade punishments for possessing cannabis.

It’s simply not a top priority for their constituents, they say.

According to Decatur Police Sgt. John Bender, officers will arrest someone possessing less than an ounce of marijuana and transport them to police headquarters. There, they are photographed, fingerprinted, and released with the copy of the charges and a court date. The Decatur Municipal Court handles the cases. The person’s fingerprints are forwarded to the Georgia Bureau of Investigation.

The fine for marijuana possession in Decatur is $188.50 said Courtney Jackson, the chief court clerk at the Decatur Municipal Court.

Decatur Police arrested 49 people for simple possession in 2020 and 51 in 2021, according to data obtained via an open records request.

Garrett said marijuana prohibition is not something that concerns her constituents. In Decatur, parents are more worried about drug and alcohol use among teenagers.

“I…hear from the Decatur Prevention Initiative and the Decatur Parents Network with concerns about alcohol and marijuana usage by students and the need to support efforts to decrease usage rather than normalize usage,” Garrett said.

Like its neighbor, Avondale Estates is also uninterested in changing the city’s marijuana laws.

“The city’s Board of Mayor and Commissioners doesn’t have any plan to take up this issue at the time,” said Avondale Estates Mayor Jonathan Elmore.

But Lionel Laratte, a city commissioner, said he “absolutely” would support decriminalization.

He noted the “societal harm” criminalization causes to people’s lives and said decriminalizing marijuana possession is “part of being a welcoming community.” But Laratte doesn’t plan to introduce any proposals to decriminalize marijuana this year.

“Maybe next year,” said Laratte, noting that a few residents have mentioned their support during casual conversations.

The city of Tucker has no plans to consider marijuana decriminalization. The DeKalb County Police Department provides policing services to Tucker, though the city has its own municipal court. Tucker City Attorney Brian Anderson says the city doesn’t have the authority to contradict state laws.

“The city of Tucker only has jurisdiction over cases where there is less than one ounce of marijuana present. The city’s elected leaders do not have the authority to decriminalize marijuana possession, as they cannot override the state legislature,” Tucker City Attorney Brian Anderson said.

The Dekalb Solicitor General’s office and police said they would stop issuing citations, arresting, or pursuing cases against people solely for possessing less than one ounce of marijuana, the Atlanta Journal-Constitution reported in 2019.

In just the first two weeks in March, 26 people were booked into DeKalb County jail with charges of possession of less than an ounce of marijuana, a Decaturish analysis of jail records showed.

Twenty of those arrested were Black, according to the booking records.

That tracks with state and national trends.

“Black Georgians are three times more likely than white folks to be arrested for cannabis possession” despite the two groups using the drug at about equal rates, according to a new report by the Marijuana Policy Project.

The story is the same around the country. A report produced by the ACLU  found that, “On average, a Black person is 3.64 times more likely to be arrested for marijuana possession than a white person, even though Black and white people use marijuana at similar rates.”

None of the DeKalb County jail bookings were solely for marijuana possession.

Six of the arrests were made directly by DeKalb County Police Department.

One of the arrests came from Chamblee Police Department, where simple possession is decriminalized.

“Decriminalization only applies to stand-alone marijuana charges that are resolved in Dekalb’s municipalities,” explained Jill Polster, a managing partner at Cohen and Hirsch, a criminal defense firm in DeKalb County.

If marijuana possession is coupled with other charges, “officers will write it up as a state-law misdemeanor charge,” Polster said.

“Most misdemeanor drug cases had additional counts like reckless driving, aggressive driving, speeding and other serious driving offenses,” clarified Kemp. He said most misdemeanor marijuana cases are dismissed. Some are referred to diversion and dismissed if the person charged completes the diversion program.

Some DeKalb County commissioners would like to decriminalize marijuana in the county, but can’t due to state law.

“Drug use should be treated with the proper substance use interventions,” said Commissioner Larry Johnson.

“It’s in the interest of decent working people to be given another chance, for it to be treated as a violation of an ordinance rather than a state crime,” Davis Johnson said.

Neither bill made it out of committee in the current legislative session. 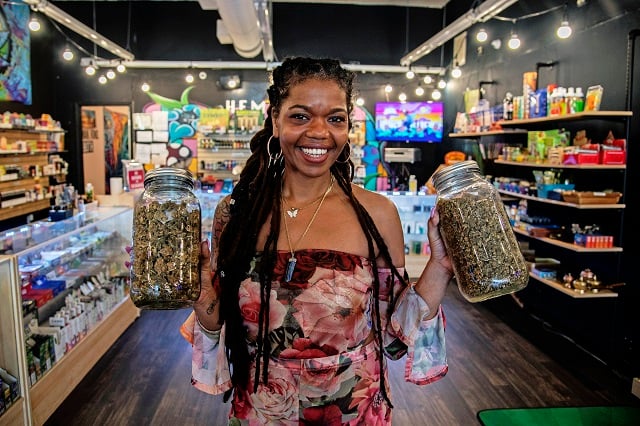