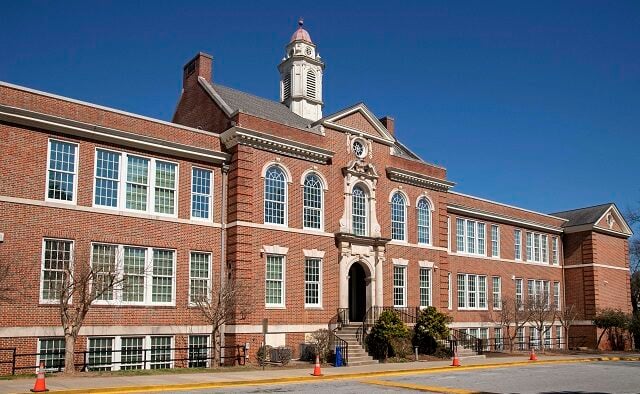 Atlanta, GA — In February, the DeKalb School Board voted to remove a “modernization” of Druid Hills High School from a list of proposed school repair and renovation projects sent to the Georgia Department of Education. Students — and their parents — have been asking the district to reverse that decision.

It looked as if the school district was prepared to proceed without including Druid Hills High on the list, but then students at the high school produced a video detailing the health and safety problems at the school. Now the DeKalb County School Board plans to revisit that decision on April 18.

As the video shows, when it rains, sewage routinely bubbles up in the picnic area where seniors eat. Poles in one of the school’s computer labs have signs warning students not to touch them or risk getting an electrical shock. There are bathroom stalls with no doors and sinks that are not adhered to the wall. There’s water damage in numerous rooms and mold, too. Emergency vehicles can’t reach the athletic field and back of the school because the driveway is too narrow.

Decaturish has published articles about the issues at the school, but the video evidence sparked interest from other local media. It also sparked outrage from the Druid Hills High community, who blasted the school district’s leadership for neglecting the school. The students published the video on April 11. Following that, and inquiries by some local television stations interested in airing the footage, the school board on April 12 announced the renovation project would be on the April 18 agenda.

“The DeKalb County School District and Board of Education remain committed to ensuring that all our scholars are in positive learning environments,” a spokesperson for the School District said. “A proposal to renovate Druid Hills High School as part of the E-SPLOST VI project list is on the April 18 Board agenda.”

When the project was removed from the list in February, Board Vice Chair Diijon DaCosta and Board member Anna Hill expressed concern about the cost of modernization at $60 million versus an earlier estimate of $6 million for repairs.

DaCosta is running for re-election on May 24. As part of Decaturish.com’s elections coverage, we asked school board candidates for their opinion about the decision to remove Druid Hills High from the renovation project list.

DaCosta, who filled out our questionnaire, said, “Druid Hills High School is a unique situation. It has been maintained by the DeKalb County School District for nearly 100 years, through the preservation or identification of alternatives outlined in the CMP process for new construction. With 130+ facilities under the obligation for financial maintenance and nearly half receiving a facility condition assessment (FCA) score of less than 70%, the decision was made to table the agenda item for further consideration from staff.”

“When you average them, we’re the lowest of any high school,” said Ken Schroeder, chair of the Druid Hills Cluster Alliance, in a previous Decaturish story about the school. Schroeder said that the score was higher than it would otherwise be because of a science wing built in 2010, but that the other buildings individually received scores in the 50s.

The April 18 DeKalb County School Board meeting begins at 11:30 a.m. It will be held at 1701 Mountain Industrial Boulevard in Stone Mountain.