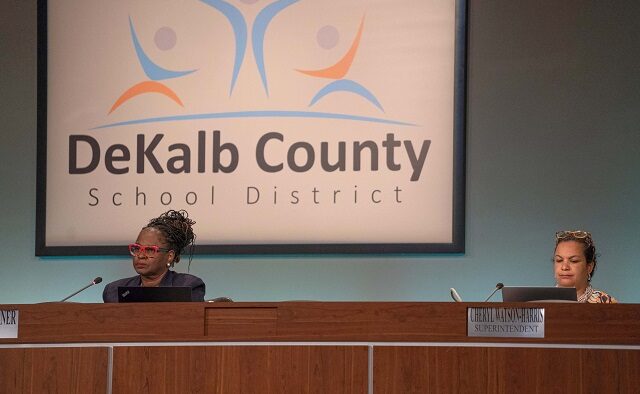 DeKalb County, GA — Cheryl Watson-Harris, the now-former Superintendent of the DeKalb County School District, says that not only did she not know that her job was up for discussion April 26, she was abruptly kicked out of the DeKalb Board of Education’s virtual meeting with no notice or even acknowledgement from school board Chair Vickie Turner.

She was removed from the meeting before the board fired her, she said.

“I was blindsided by yesterday’s BoE action. I was unaware that my contract or employment would be discussed during yesterday’s meeting because I was not notified, and it was not identified on the meeting notice,” said Watson-Harris.

She said on April 27 she still has not received any formal notification that she has been fired. It was her understanding the April 26 special-called meeting was to address student discipline appeals.

“BOE Chair Vickie B. Turner and Vice Chair Diijon Dacosta prepared the executive session agenda to address student appeals,” Watson-Harris said. “There was no mention of a discussion of my employment. I was not invited to be a part of the executive session meeting after the student appeal discussion, and was released from the Zoom meeting without notice. BOE Chair Vickie B. Turner requested to the IT representative that I be removed from the meeting without any direction or acknowledgement of me.”

Watson-Harris said she would share additional information when she has it.

Some school board members were equally surprised by the superintendent’s firing.

The time of the meeting was moved from 3 p.m. to 5 p.m. a move which forced DeKalb County School Board members Allyson Gevertz and Marshall Orson to choose between remaining at the meeting or attending other engagements, including attending a district-wide event that had been planned and promoted for months.

Normally, per Orson, the DeKalb School Board Chair sets meeting times in consultation with the rest of the board so that all members can attend. Board Chair Turner was certainly aware of the previous commitments and was reminded of them before the April 26 meeting, said Gevertz.

Gevertz said in a statement that Turner only informed her of the addition to the executive session agenda at 4:35 p.m.

“I told her I felt the topic warranted full board participation, and she was aware of at least two members who had conflicts. I asked if that discussion could be postponed, and she said she would leave it to the people who would be attending the meeting. I made the same plea when the board meeting began and only Mr. Orson supported my motion to postpone the critical conversation,” said Gevertz.

This ninja-motion approach seems to have become the board’s new normal after the surprise substitution of a $444 million plan for fixing numerous schools instead of considering a renovation of Druid Hills High School. The board on April 18 was set to reconsider an earlier decision to remove the DHHS renovation from a list of other projects identified in the district’s $2 million comprehensive master plan. The item was placed on the agenda following the release of a video created by Druid Hills High students that showed numerous health and safety problems at the school. But the board on April 18 doubled down on its earlier rejection of that project, passing the new repair plan over the objections of Gevertz, Orson and Watson-Harris. They wanted more time to study the proposal

“This action was taken with no notice to me and was contrary to earlier board discussions regarding the status of the superintendent,” Orson said. “It was a clearly planned action taken by a subgroup of the BOE determined to end her management of the district and to replace her with a hand-picked interim, who this group clearly had already discussed and approached. It was a sad day for DeKalb County as a whole, and an even worse day for our students.”

“There was no rationale for this decision, though there has been speculation and selected comments. In various reportings, there were clear efforts to pin the blame on the superintendent for the Druid Hills High School BOE debacle. In other reports, there were efforts to blame the superintendent for a lack of permanent leadership in key positions though the BOE multiple times has prevented her from making permanent hires, including for the critical Chief of Operations and Human Resources Chief positions,” added Orson.

What Turner described as a “breakdown in communication” between Watson-Harris and the school board, Orson described as attacks on the superintendent’s character that he had witnessed firsthand.

Watson-Harris said that she did not know that she was on the executive session agenda, and that Turner directed the IT staff member managing the virtual meeting to drop her from the meeting without acknowledging her.

“I have not received any formal written notice from BOE Chair Vickie Turner or Vice Chair Diijon DaCosta,” added Watson-Harris.

Both Orson and Gevertz praised Watson-Harris while criticizing other members of the Board.

Gevertz even attributed her current run for re-election to seeing the superintendent at work.

“Those closest to me know that a huge reason I chose to run for office again was because I was inspired by the Superintendent’s focus on kids. I told friends that the district was headed onward and upward, and I wanted to be a part of that trajectory. I said I had never met a leader more dedicated to the success of all students. I was so proud that finally, the DeKalb School District was focused on students first,” said Gevertz.

Orson praised qualities he felt that the district badly needed.

“Supt. Watson-Harris brought a keen insight and vast experience on how to move instruction forward,” Orson said. “She possessed the ability to build strong bonds with principals who, in turn, felt supported and more committed to the cause—teaching our children. She understood how to break down current practices and processes and understood what was needed to rebuild or replace them with the goal of a more efficient and more effective organization that ultimately would produce better outcomes for our children. She was adept at getting her team to buy into a vision and work to move the entire enterprise forward.”

“Yet, it was already clear to me before today, and is quite evident now to all of the public, that none of the foregoing mattered to the majority of the BOE,” Orson added.

Gevertz did not hold back from harshly criticizing her fellow board members.

“The soon to be released Cognia [accreditation] report shows the weakness in the District does not lie with the students, teachers, administrators or even the superintendent. The weakness in DeKalb County Schools is the DeKalb County School Board. I keep pondering what it will be like if I continue to serve on a board where progress is stifled, adult egos prevail and students are forgotten,” Gevertz said.

Gevertz also signaled willingness to work with the state and support for solutions suggested recently by DeKalb legislators, which include a possible reconfiguration of the board.

“I am currently working with state legislators and the Georgia Board of Education to make them aware of the disorder and incompetence of this board and assist in any communication or information that can help those who oversee the DeKalb County School Board make a decision on its future,” said Gevertz.