Editorial: DeKalb School Board cuts off its nose to spite its face

Editorial: DeKalb School Board cuts off its nose to spite its face 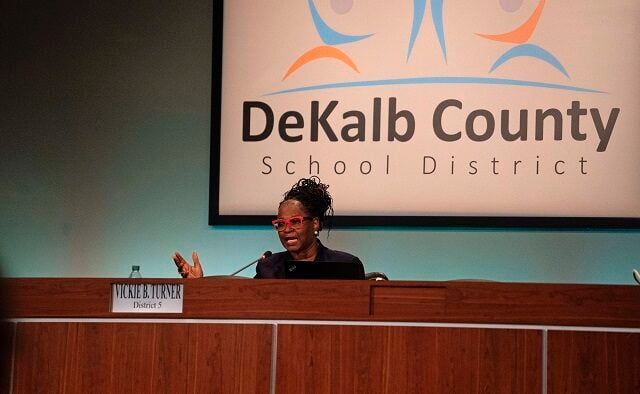 Board Chair Vickie Turner spoke of serious needs for repairs in schools across the district during the DeKalb County Board of Education regular meeting on Monday, April 18, 2022. Photo by Dean Hesse.
Share

Like many parents in the Druid Hills High School cluster, I’ve spent the last day or so puzzling over the actions of the DeKalb County School Board.

The board on April 18 rejected a plan to modernize Druid Hills High in favor of a plan to address the needs of all schools. That sounds good until you realize that the district already has a plan: it’s the Comprehensive Master Plan the district just spent $2 million developing. Creating that plan took months of meetings with key stakeholders. School board members who voted for the new plan insist the CMP will still be followed, but didn’t explain how they intend to reconcile the CMP with the vaguely ambitious repair plans they just approved.

For those of you keeping score at home, school board members Allyson Gevertz and Marshall Orson voted against the new repair plan. Gevertz had enough sense to suggest the school board at least study this idea before foisting it on the school district’s staff to execute. Her suggestion was quickly dismissed.

One estimate I’ve seen puts the price tag of the new repair plan at $444 million, a fraction of the $1 billion in projects identified in the CMP, only $562 million of which has an identified funding source. Why would the board essentially chuck the CMP out the window in favor of some scheme a cabal of board members apparently cooked up over the weekend? Why is the school board willing to throw out months of work and planning, willing to ignore the good faith engagement of stakeholders, willing to flummox the district’s staff and willing to erode its credibility with the public?

The only conclusion I can come up with is they did it out of pure spite. The majority of the school board just told the Druid Hills High community to screw off.

Because DHHS embarrassed the district, the school board cut off its nose to spite its face. That’s what passes for leadership in DeKalb County Schools.

It’s funny to me that the board members lamented that students at other schools didn’t make their own videos documenting problems in their buildings. The school board just demonstrated why students in other schools haven’t embarrassed the board the way Druid Hills High students did. When you piss the school district’s leadership off, they take it out on you.

Mighty nice renovation project you’ve got planned there. It’d be a shame if something happened to it.

DeKalb Schools’ reputation for being vengeful precedes this latest episode. Whenever Decaturish tries to write about issues going on inside DeKalb County Schools, teachers ask to speak anonymously because they fear retaliation. That’s a common concern at schools across the district. It would be fair to say that what the school board did on Monday is on-brand in that regard.

I don’t know where we go from here, but I have a few predictions.

– The most immediate consequence of this is every media outlet worth anything is about to be knocking at DeKalb County Schools’ door, asking what in the actual hell is going on with these schools. Why does a district with a $2 billion budget have schools that are falling apart? Why did school board Chair Vickie Turner say with a straight face that it would be a “miracle” if the district completes all the projects on its to-do list? It doesn’t require a miracle to glue a sink to a wall properly or prevent raw sewage from bubbling up into courtyards. It simply requires money and requires our board members to be careful stewards of that money. Have they been? That’s a question worth asking, too.

The school district and school board are about to face some uncomfortable questions about their management of this district. Expect any employee or parent who speaks publicly and any media outlet that starts stepping on toes to be in the school board’s crosshairs. The board has now clearly shown us it’s ready to use its power to retaliate against us if we complain.

– I also wouldn’t rule out costly litigation and inspections by other government agencies attempting to bring Druid Hills High up to minimum safety standards. The Georgia Department of Education’s Facilities Team is already poking around at Druid Hills High. It would be interesting if they turned their attention to other schools as well.

– Will the projects that the district authorized on Monday actually happen? The superintendent didn’t seem sure they’d happen immediately. She asked for time to study the plan, which the board declined to give her. My gut says little if anything will get done. The result will be finger pointing and the superintendent likely getting canned for being unable to carry out the school board’s half-baked mandate. Maybe doing nothing was the end goal all along. Maybe the board is getting a two-fer: sticking it to Druid Hills High and setting Superintendent Cheryl Watson-Harris up to fail. With this board, who knows?

– My longer-term prediction is this will reawaken discussions about annexing some or all of the Druid Hills Cluster into Atlanta Public Schools. Personally, I don’t think that has a chance of happening. Why would Atlanta Public Schools want to take on crumbling buildings that would cost millions to fix? There’s a new law on the books that actually makes this process of annexing schools into Atlanta harder than it used to be.

But I can promise you there are people studying that law right now and weighing whether it would be worth it to try and break away from DeKalb County Schools. If someone makes a serious push to annex the Druid Hills community into Atlanta, the discussion will be divisive and toxic. Republicans at the state capitol will be delighted to fan the flames of any annexation controversy here. Pitting DeKalb County’s “Blue Wall” of Democratic voters against one another benefits Republicans politically.

This can go in many directions. What the DeKalb County School District has set into motion with this vindictive action I can’t know for certain.

What I am confident saying is this school board is simply pitiful and all our students deserve better leadership.