The first part of the bill ensures that the state is enforcing its parity law regarding mental health treatment and requires insurance companies to cover mental health services no more restrictively than they cover medical conditions, like heart conditions or diabetes, according to the Georgia Mental Health Consumer Network.

“Today, we celebrate a triumph in Georgia. This may be the end of the beginning, but it is simply the beginning of the work that lies ahead,” Ralston said.

He added that the many people who worked on the legislation were united on one core principle, “failure was not an option and the status quo had to go.”

The bill will put about $183 million toward improving the state’s mental health care system in the fiscal 2023 state budget.

“Georgia is making a transformational commitment to improving mental health care, not just through House Bill 1013, but also in our budget,” Ralston said. “There is still more work to be done.” 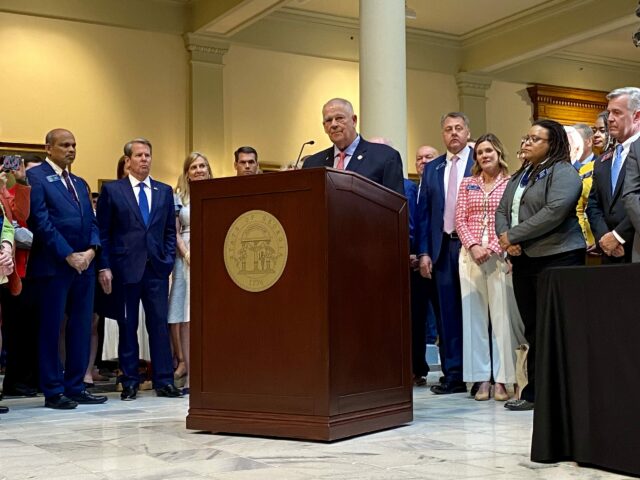 Speaker of the House David Ralston gave some remarks at the signing ceremony for the Mental Health Parity Act on April 4, 2022. Photo by Zoe Seiler.

Lieutenant Governor Geoff Duncan said HB 1013 is one of those rare efforts.

“The cumulative total of good that this bill does is almost immeasurable all across the state,” he said. “It provides mental health care in areas related to the courts, education, health, insurance, public officials, employers and mental health and social services.”

The bill also provides the workforce that’s needed to attack the problem head on, Duncan said.

Gov. Brian Kemp noted that the signing of a bill like this has been a long time coming. In 2019, the state created the Behavioral Health Reform Commission, which worked to improve the mental health care system.

“We bring hope to the many families across Georgia who have a loved one suffering from some sort of mental or behavioral challenge. Today, we reaffirm to those families and individuals that they matter, that they are cared for, and that their fellow Georgians will not turn a blind eye to their struggles any longer,” Kemp said. “Speaker Ralston and the many men and women who have worked on this legislation and unanimously voted for its passage, have made history. We’re about to make some more, so I say we sign this bill into law.”

Rep. Mary Margaret Oliver (D-Decatur) told Decaturish that she was still “a little stunned” after the bill signing ceremony because the bill has such significance and touches all parts of the state’s mental health system.

“The combination of law enforcement support and changes that they wanted, cancellable education loans — over $10 million of benefits there — increased services, and perhaps most importantly, for the long run, a really effective opportunity to enforce parity between payments of mental health and physical services,” Oliver said. “We know that although parity has been the general law, we now have an opportunity with this bill supplementing the federal bill to enforce parity. So, you put all these different compartments, they all these different resources together in different parts of government, and you’re going to see reform happen.”

The Senate substitute to the bill softened a proposal in the legislation to require health insurers to treat behavioral health benefits the same as physical care and lessened the changes to Georgia’s involuntary commitment criteria. The bill also no longer references the World Health Organization and its definitions for mental health conditions, the Georgia Recorder reported.

“Together with House Bill 1013, we have brought a bill that every single person that we heard from can be proud of,” Sen. Brian Strickland (SD-17) said during the Senate floor session on April 1. “The bill has many, many parts.”

Strickland, a senator from McDonough, carried the bill through the Senate.

It also codifies that those on Medicaid and PeachCare for Kids receive coverage for mental health and substance use disorders that they should be receiving under federal law.

“Under part two, we acknowledge the fact that we can have all the coverage in the world for mental health in our state, but if we don’t have the workforce where this service is being offered in every corner of our state, we’re still not accomplishing anything,” Strickland said.

The bill addresses involuntary commitment. It codifies the assistant outpatient treatment program and establishes a grant process to keep this program operating through the state Department of Public Health.

The legislation allows police officers or a mobile crisis team to take an individual in for an emergency examination and establishes mental health training for law enforcement. The legislation also ensures that a certain percentage of money in public-funded health insurance programs goes to patient care rather than administrative costs, according to the Georgia Recorder.

Oliver said the state should see some of the $183 million spent before Christmas.

“We have new psychiatric beds at Grady and the co-responder programs are already [operating], so you’re going to see implementation that’s going to begin this summer and be moving by Christmas,” Oliver said. “This is a long road to reform a significantly huge system. We’re on the path and this bill sets in the best direction possible.”

“We’re doing a lot of lifting in a lot of different areas,” Oliver said. State Rep. Mary Margaret Oliver (D-Decatur) was one of the sponsors of the Mental Health Parity Act. She worked with her interns McKaylin Darsey (left) and Michelle Salandy (right) on the bill. Photo by Zoe Seiler.