Local Atlanta artist Charmaine Minniefield poses with works from "Indigo Prayers: A Creation," a series of paintings inspired by her search for her grandmother’s ancestral lines in Gambia, West Africa currently on exhibition at the Michael C. Carlos Museum through September 11, 2022. Photo by Dean Hesse.
Share

Atlanta, GA — Atlanta artist Charmaine Minniefield was inspired to create “Indigo Prayers” by her time in the Gambia, West Africa, searching for her grandmother’s ancestral lines.

Minniefield traveled to the Gambia in January 2020 and ended up staying for 14 months during a quarantine period of the COVID-19 pandemic. She used her time as an artist in residence to research her origins on a deeper level.

“The way that I wanted to experience that wasn’t necessarily researched in any kind of genealogy or other routes that have taken,” Minniefield said. “I wanted to do that by inviting the memories of my ancestors into my body. I was recalling ancestral memories, and I was doing that by returning to trade skills, customs and cultural expressions that I knew within me and my own cultural identity, but I also knew in my great-grandmother.”

Minnieifield’s great-grandmother, Ora Lee Fuqua, came from France fleeing religious persecution with a group of people. In that group was also a woman named Grace, who was from Africa. Grace was an enslaved woman from France and came from Senegal and the Gambia. Minniefield considers Grace to be her grand ancestor.

In her memories, she built a bridge from her present all the way back to her past, to her beginnings and place of origin.

“Indigo Prayers: A Creation Story” is on display until September at the Michael C. Carlos Museum at Emory University. The exhibit builds on an ongoing exploration of the ring shout, an African American practice of resistance whose West African origins predate enslavement. Minniefield learned the full-bodied rhythmic prayer from her great-grandmother. The prayer was performed by her ancestors during enslavement as a way to secretly preserve their African identity, according to a press release. 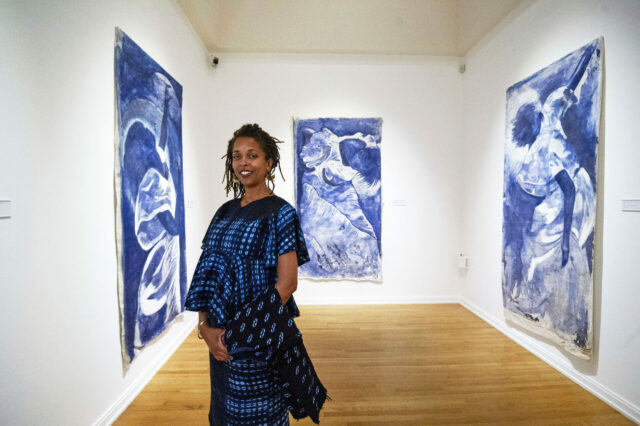 Local Atlanta artist Charmaine Minniefield poses with works from “Indigo Prayers: A Creation,” a series of paintings inspired by her search for her grandmother’s ancestral lines in Gambia, West Africa currently on exhibition at the Michael C. Carlos Museum through September 11, 2022. Photo by Dean Hesse.

“We would gather in small wooden structures,” Minniefield said. “They had taken our drums from us because it was a form of communication during enslavement as a way to dismantle community. We, in resistance to that, created Praise Houses where the whole structure was an instrument and the floor was our drum. We stood in circle. We sang in call and response, and we all moved in unison in circle inside of that wooden structure, beating the floor in a whole polyrhythmic language.”

One of the most known ring shouts was performed during watch night service in 1862 while enslaved individuals awaited the announcement of emancipation.

“The ring shout is important today as we insist on the value of our Black narratives present in physical form, as in our Black bodies, Black lives, and in our memories, in our histories and in our future,” Minniefield said.

Minniefield’s work explores indigenous pigments like indigo, crushed oyster shells, and mahogany bark as evidence of cultural preservation through time and across the Middle Passage.

“I sought these materials. I found them kept by elders who had kept the traditions for generations, for a millennium,” Minniefield said. “I used those materials in the way that felt familiar to me and in a way that was, for me, resistance.”

At a moment in present history, resistance was needed, she added.

“That act of resistance, that act of memory, was all based on the ring shout, which did the same,” Minniefield said. “I, too, shouted, which I had not recalled physically in my body since I was a kid. It was my meditation, my mourning, and it was my medicine. During that time, I came to realize that was what we were all doing and that’s what my ancestors were doing during the ring shout, and I was recalling those memories.” 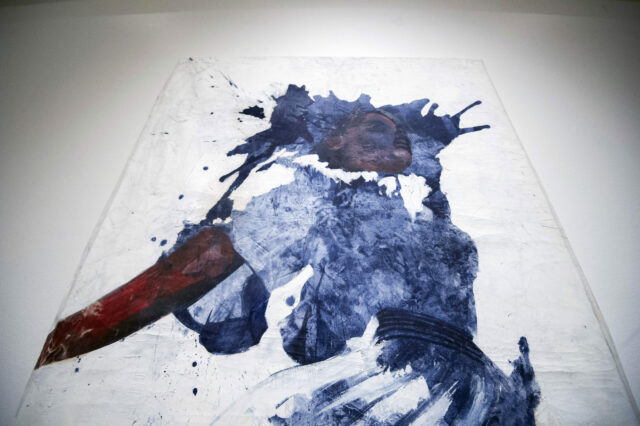 “Indigo Prayers: A Creation Story,” a series of paintings by local Atlanta artist Charmaine Minniefield inspired by her time in the Gambia, West Africa searching for her grandmother’s ancestral lines is on exhibit at the Michael C. Carlos Museum through September 11, 2022. Photo by Dean Hesse.

The paintings in the exhibit are self-portraits of Minniefield in that prayer. Each image is a prayer or an attribute that affirms life, she said.

“I tell the story as a myth that I created, a creation story of an initiation where my great-grandmothers all prayed for me, to meet me,” Minniefield said. “Each prayer that they prayed is the name of each of the pieces.”

The whole art installation is a ring shout and a prayer. Minniefield inserts her own body into each work as an act of remembrance. Her movements, embodied memories of her maternal ancestors, reassert Black identity and resilience as resistance today.

“I think it’s timely as we reemerge into this newness,” Minnieifield said. “We have a chance to reflect, remember and create something completely new.”

Her work recalls the history of these elements as ancestral totems reaffirming identity, like the Adinkra symbols in freedom quilts, hidden in plain sight to show the way home.

“Indigo Prayers: A Creation Story” is being presented in conjunction with Minniefield’s Praise Houses, which recreate the small, single-room structures in which enslaved people gathered to worship.

The first in the series of Praise Houses was constructed at Oakland Cemetery in conjunction with Flux Projects to celebrate Juneteenth 2021 and honor the over 800 enslaved people interred in the cemetery’s African American burial grounds. While Minniefield’s Praise House at Oakland has now closed, she plans future locations in downtown Decatur, on Emory University’s Atlanta campus, and at South-View Cemetery, where Congressman John Lewis was laid to rest.

“The Praise House project invites that conversation around race, equity and justice and is an act of resistance against erasure,” Minniefield said. “The Praise House is itself, just like the ring shout was.”

The Carlos Museum is hosting a member celebration of the two current exhibitions, “Indigo Prayers: A Creation Story” and “And I Must Scream”, next week. To become a member and attend future member openings and events, visit the Carlos Museum website. 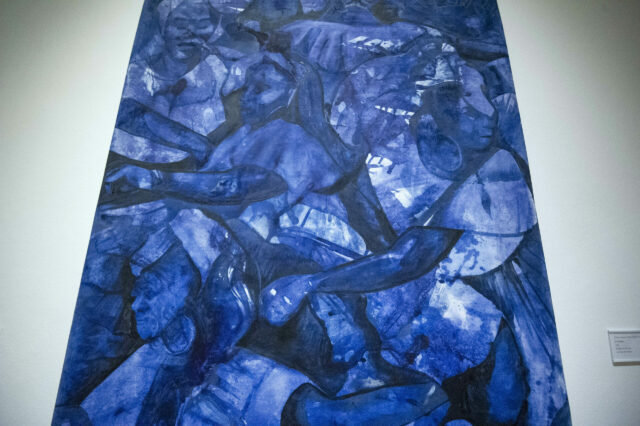 “Indigo Prayers: A Creation Story,” a series of paintings by local Atlanta artist Charmaine Minniefield inspired by her time in the Gambia, West Africa searching for her grandmother’s ancestral lines is on exhibition at the Michael C. Carlos Museum through September 11, 2022. Photo by Dean Hesse.