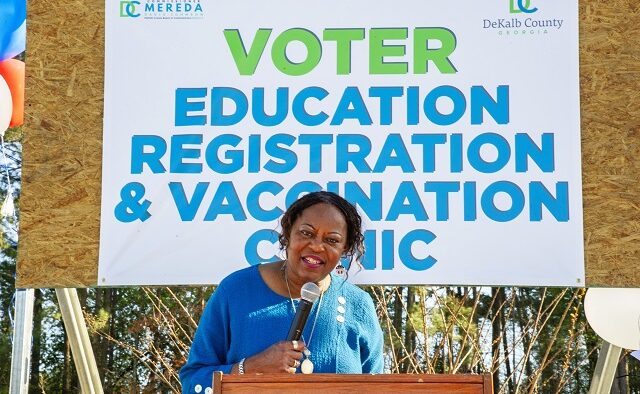 DeKalb County, GA — Elected officials in DeKalb County are turning up the heat on the DeKalb School Board over its recent decision to fire Superintendent Cheryl Watson Harris.

Watson-Harris, who was hired by the Board of Education in 2020, is the seventh DeKalb County School District superintendent in twelve years.

DaCosta is running for reelection in the District 6 Board of Education election. He is currently the Vice Chair of the board and voted to support the firing of former superintendent Cheryl Watson Harris during an April 26 meeting.

“The children are paramount. Parents and prospective residents must feel confident in our educational system,” Davis Johnson said.

On April 29, DeKalb Commissioner Steve Bradshaw also withdrew support, saying that he had waited until he had an opportunity to speak to DaCosta.

“After hearing him out and after careful consideration, I have made the decision to withdraw my previous endorsement of his re-election to the DeKalb Board of Education,” said Bradshaw in a statement.

DaCosta declined to attend an April 28 forum for the District 6 race hosted by Decaturish.com. One of his opponents, Venola Mason, rearranged her work schedule to attend.

At his State of the County address April 27, DeKalb CEO Michael Thurmond compared the current situation to the turmoil faced by DCSD in 2013, which led to several school board members being ousted and Thurmond becoming the interim superintendent.

“We almost lost the DeKalb County School District because of what grown folks are doing on the school board,” Thurmond said. “Enough.”

During the Avondale Estates City Commission meeting on April 27, Mayor Pro Tem Brian Fisher encouraged others to pay attention to the school board and said that until the cities decide they’ve had enough “and start electing competent people into these roles, we will continue to be in this position year after year after year.”

“What I can tell you is there’s not a single amount of work that we can do, a building we can build, a development that we can do that would have a bigger impact on our community that if our kids could go to safe, well-run schools,” Fisher said. “DeKalb County doesn’t have that and hasn’t had it for some period of time.”

He added that all DeKalb schools deserve to be fixed, and all students deserve to get a quality education.

“This board’s answer was to fire a superintendent, who was second on their list,” Fisher said. “Until we begin to take these position seriously in our community, it will always be where our kids are behind the eight-ball because of the way our school system is run.”

“It would seem as of last week they have thrown it in the garbage can. I would encourage the board to reevaluate that, and I would encourage all of you to only vote for people who support adopting that comprehensive master plan and making it happen,” Elmore said. “They can make it happen. I know that’s a big step, but that’s what you do for the future, that’s what you do for kids is you take big steps. If you’re getting elected to the board of education, you’ve got to have the spine to do it.”

He added that the recent actions of the school board and the firing of the superintendent was spineless.

State Sen. Emanuel Jones has discussed the possibility of reconfiguring the board to foster collaboration rather than competition.

Other local elected officials have also expressed concern and sometimes vocal criticism of the DeKalb County School Board. Doraville City Council member Stephe Koontz announced that she had asked the school board member who represents District 1, Anna Hill, to resign because of her part in recent school board actions.

“I feel any of the current DeKalb County School Board members who don’t see the chaos they have created by scapegoating the superintendent need to step down and move out of the way as this dysfunction is resolved,” said Koontz.

Commissioner Ted Terry released a statement saying, “I was shocked and saddened by the news that DeKalb County Superintendent Cheryl Watson-Harris was unceremoniously terminated.”

Terry called the DeKalb County School District “central to our county” and called for a countywide summit on the future of education in DeKalb.