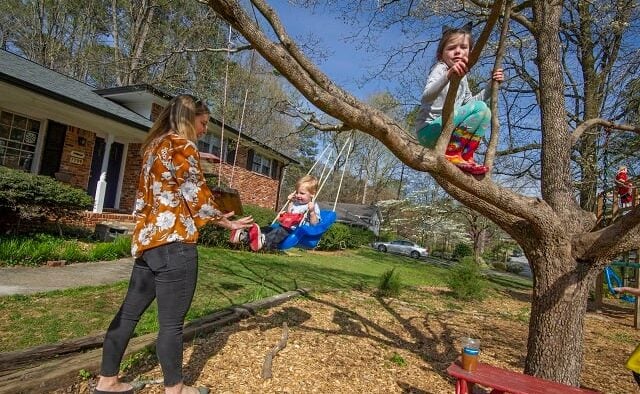 “On a given afternoon we'll have 10 kids in our yard just running around from four or five different families. Why? Because my kids are in the front yard and neighbors see them. So they come over, they play. If we all hide everything away in our backyard, ok, it looks nice. That's not as important to me as building community,” said Crystal O’Neal. Photo by Dean Hesse.
Share

The tree house became a popular hangout for people living in a subdivision off Brockett Road near the local elementary school. It’s also become a target for Tucker Code Enforcement and the O’Neals have been ordered to remove it. The family says they’ll fight to keep the tree house because it is the center of their community. 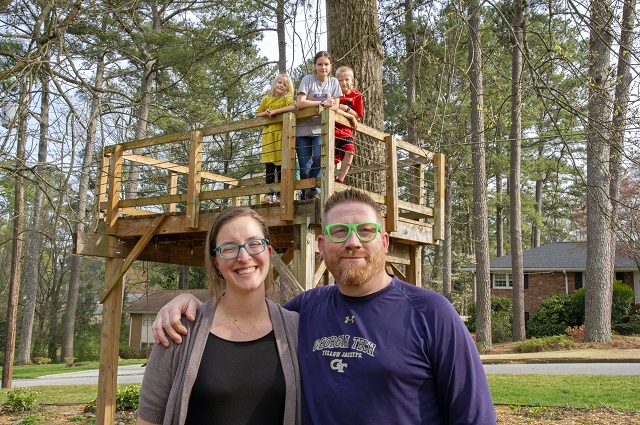 Crystal and Joe O’Neal and their three kids. The family is fighting the city to keep their tree house after Tucker Code Enforcement told them it was a violation of city code. Photo by Dean Hesse.

Built into the side of a mature oak tree, the wooden platform has become part of the landscape of the O’Neal’s corner lot in Tucker among azaleas, iris and a dogwood tree.

The tree house became a neighborhood pit stop for toddlers, school-aged kids fresh off the afternoon bus, dog walkers and people out for a stroll. It was the centerpiece at block parties. Several neighbors said the tree house was one of the reasons they moved into the subdivision.

Joe and Crystal O’Neal said any given afternoon, people and pets are hanging out in their corner yard.

One violation the O’Neals received was taped to their front door. It was for an accessory structure in the front yard of a corner lot. Tucker city code defines accessory structures allowed in all residential and special districts as “including but not limited to: garages, storage sheds, and personal recreational facilities such as swimming pools and tennis courts.”

The O’Neals reviewed the code before building the tree house in 2018. There was no mention of tree houses, Joe O’Neal said, but the code references play structures and play equipment, which is allowed. Tucker code Sec. 42-1182 states:

In an email, City Planner Kylie Thomas told the O’Neals, “While play equipment is allowed in residential zoning districts, they are classified as accessory structures and therefore must comply with [city] requirements …”

Two other families in the subdivision told Tucker Observer they received code violations. Jo McPhail got multiple warnings for storing construction materials in the carport during an active kitchen renovation, even after speaking with Code Enforcement. 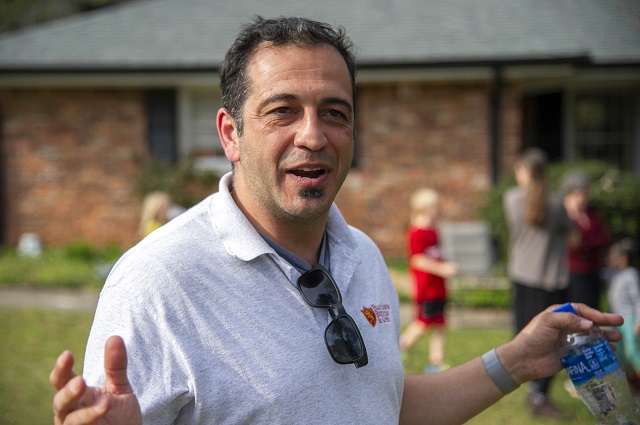 Peter Bidhendi was cited for having a playset and trampoline in his front yard. He spent a lot of time refurbishing the playset he got from a neighbor in Tucker. He’s not sure who called Code Enforcement about his property. Photo by Dean Hesse.

Peter Bidhendi was called out for accessory structures in the front yard of a corner lot – a trampoline and a tree house. Bidhendi lives down the block from the O’Neals. He was cited by Code Enforcement for having a trampoline and wooden playset in his front yard, also a corner lot. Bidhendi drove around the Brockett Road area and took 15-20 pictures of yards with trampolines.

“When I brought it up to [Code Enforcement], they said, ‘Oh, yeah, we can make them move it, too,’” he said. “No, no, no. You don’t understand. If a rule exists, and it is essentially not enforced, it shouldn’t be a rule.”

At first, Bidhendi thought it was an encroachment issue. He offered to turn the play set away from the corner.

“The people I spoke with at city were nice. They weren’t unkind or unduly harsh. They said, ‘You can apply for a variance.’ And that made it sound like there’s a path [to keep the equipment in front]. But then you start asking questions, and they want you to show hardship,” Bidhendi said.

In Bidhendi’s case, Code Enforcement suggested putting the trampoline and playset in the backyard, which is sloped and narrow. He obliged.

“I couldn’t ever really understand. Give me a situation where a variance would be approved,” Bidhendi said. “Tell me somebody else has done this, and if it was successful or not.”

‘A part of our community’

The O’Neals say their tree house has been an asset to the community.

“For four years we’ve had the tree house here. It’s been a part of our community, and how we’ve met neighbors. And now we’ve had somebody move in who knows the code and is citing everything they see,” Joe O’Neal said.

Effective code enforcement has been shown to increase property values, bolster public safety, protect public health and improve the overall image of a community, according to Tucker’s website. Under Code Enforcement FAQs on the site, violations listed are fences or walls around a property, high grass and weeds, accumulation of rubbish, inoperable vehicles, parking on unpaved surfaces, outdoor storage and prohibited signage.

“You drive around in Tucker and neighborhoods, and what do you mostly see? You’re going to see a lot of play equipment,” Crystal O’Neal said. “If the code is supposed to be serving the city and the citizens, it’s not working.”

In Tucker, as in most municipalities, reporting code violations to the city is anonymous.

“I could drive around and go cite people if I wanted,” added Joe O’Neal. “Anyone could.”

The O’Neals have been dealing with Code Enforcement since early January.

On Jan. 8, a notice of violation appeared at the O’Neal’s home listed several items. Crystal O’Neal admits her garage door needed repair. What confused her were the accompanying photos of the tree house, hammock, slack line and baby swing.

“The warning listed a climbing structure, hammock, swing. I thought, I don’t really understand this. I’m a pretty collaborative person. I try to do what’s asked of me,” said Crystal O’Neal. She immediately removed the small items.

Crystal O’Neal said she began calling garage door repair companies and found most were having supply chain issues. She updated city staff, who were responsive to potential delays in fixing the garage door.

On Feb. 18, a citation was issued for not removing an accessory structure – the tree house. Former councilmember Matt Robbins helped Crystal O’Neal get to the right department at city hall.

“It wasn’t an easy process, but it helped because I knew somebody who would be able to help me get some answers. It took some time,” she said.

She said when she eventually spoke with Tucker Code Enforcement Manager Marcella Perdomo, who asked if the tree house could be relocated to the backyard. But the backyard is long and narrow, with a concrete pad left by the previous owner. Moving in, they knew the backyard had limitations. It was the corner front yard that sealed the deal.

“We envisioned a good front yard. One where we could spend time and invite people over,” Joe O’Neal said.

Perdomo told Crystal O’Neal the hammock, slack line and swing could stay in front. That conflicted with the first citation the O’Neals received.

On March 7, the O’Neals received an email from City Planner Thomas, who wrote that if the tree house was constructed before 2016, it would be grandfathered in “as these ordinances were adopted in 2016.” A change was made to city code regarding corner lots in April 2021, but it is unclear if that change would allow the O’Neals to be grandfathered in.

The O’Neals were told to move the tree house, or apply for a variance which requires a residential survey of the property.

On March 23, the O’Neals went to Tucker municipal court.

“When we went for the arraignment, the prosecutor was not very happy about doing the case. He asked if we’d wait to talk to the city planner. We talked to the city planner and they didn’t want to budge. So, our only option is really to go to the judge,” Joe O’Neal said.

The O’Neals will appear in Tucker municipal court on June 22. They want to keep fighting for their tree house.

“We had no problems for four years,” Joe O’Neal said, shaking his head. “It should be in the code. If Tucker is going to enforce tree houses that way, it has to be written that way, so everybody knows up front.”

“I don’t think the citizenship knows that we need to change it because you don’t know about it until you run afoul. We think we’re going to lose the tree house, but we’d rather fight to make sure everybody understands what exactly they’re facing.”

During the Tucker City Council’s April 11 meeting, District 2 Councilmember Noelle Monferdini, whose district includes the subdivision, said the city is looking at updating its code regarding accessory structures.

“[Councilmember Alexis Weaver] and I are going to start working on the accessory structure definition, so if there’s anyone who wants to work with us, we’re allowed to meet in threes,” Monferdini said. “We’d appreciate you just looking at definitions, kind of citywide. What makes sense, what doesn’t make a Tucker friendly. Then we will bring it to you guys someday in the future.”

It’s not known if the tree house dispute prompted her comments. 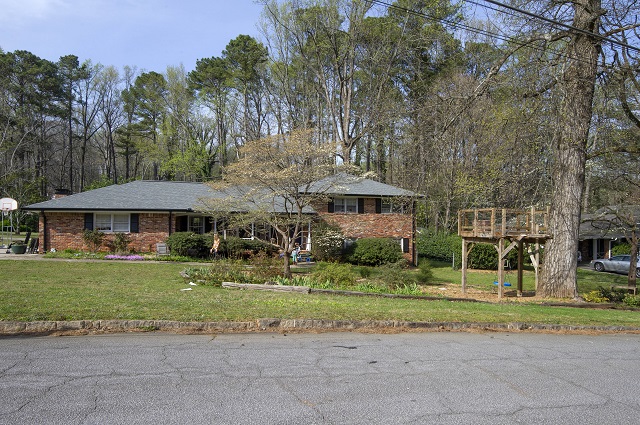 The O’Neals have lived in Tucker since 2015. They say having a tree house builds community. Photo by Dean Hesse.