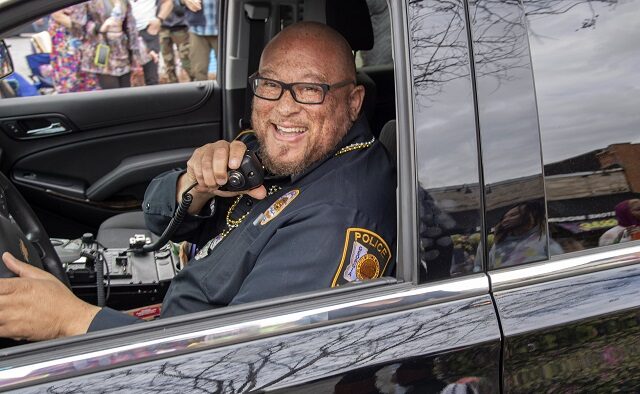 Stone Mountain, GA — Police affairs were an important part of the Stone Mountain City Council’s regular meeting on Tuesday, April 5. The city is dealing with staff turnover in several departments.

Now, Chief of Police Chancey Troutman, who has worked for the city for 35 years, is retiring, effective May 1, Garrett announced.

“I’m working with [Troutman] now to work up a transition plan, so that we can be sure that the chief’s position is covered, while we await the placement of a permanent Chief of Police for the city,” Garrett said.

Garrett also announced that Micah Richards won first place in a National Forum of Black Public Administrators contest for a research project about police accountability in Stone Mountain. The study used geolocation technology to ensure police officers patrolled all parts of the city.

Richards explained this was a much cheaper alternative to the previously considered option of hiring new police officers. The geolocation devices cost only $15 per month, versus the around $300,000 that would be needed to hire new officers.

The project used customer service training to improve the public’s trust in the police department.

“The citizens witnessed the increase in police presence and expressed that they felt safer without us telling [them] that we implemented this initiative… the results speak for itself,” Richards said.

Miller-Thornton started and led the project, Richards said. He added, the results are now drawing attention from across Georgia and the country.

The council approved a four-year lease agreement with the Georgia Municipal Association to pay for the purchase and outfitting of two new police vehicles.

During the meeting, the council members were unable to resolve controversies over who should be the mayor pro tempore because detailed information about the resolution was not included in the meeting packet. The council postponed voting on the matter until the next regular meeting on May 3.

And the council deferred the decision on whether Chakira Johnson should continue as the council’s representative on the Downtown Development Authority (DDA).

At issue is the procedure for appointing and removing the council’s representative on the DDA.

“There are some that have the feeling that this kind of appointment is an appointment for life…attorneys seem to differ in their opinions on this matter,” said Council member Clint Monroe, who would like to take the position from Johnson.

“I believe it’s time for some fresh eyes and views to bring Stone Mountain to its very best that it can be,” Monroe added.

But Johnson pushed back, arguing that state law does not give the city council the authority to remove a member from the DDA. Johnson has served on the DDA since its founding in 2006, according to her website.

Another topic of debate was where the city should put up banners to celebrate Memorial Day and other national holidays.

However, after Council member Gil Freeman expressed discomfort about decorating the cemetery because some people buried there had ties to the confederacy, the council decided to provide $1,000 for the purchase of decorative materials for just the city lampposts and the gazebo, leaving the cemetery out for now.

The council also passed a resolution directing the city administration to coordinate with DeKalb County to improve solid waste recycling in the city. The city and county will work together to provide free recycling bins to all Stone Mountain residents around Earth Day on April 22.

The city is sponsoring the planting of sunflower seeds on Earth Day, in solidarity with the people of Ukraine.

“We can have them all over the city, but definitely we’ll start with the parks and promote solidarity with the people of Ukraine,” said Monroe, who initially proposed the project.

– Additionally, Garrett announced that the city will open bids for proposals to administer the American Rescue Plan Act funds on Friday, April 8 at 2 p.m. at City Hall.

– The city council approved the recommendation to add stop signs to the intersection of Cloud and Ridge Avenues following a traffic evaluation study there, with a total cost of $700 for the new signs.

– The council approved an ordinance exempting Main Street from open container laws so that people can consume alcohol during upcoming Tunes by the Tracks events in May, June, September, and October.