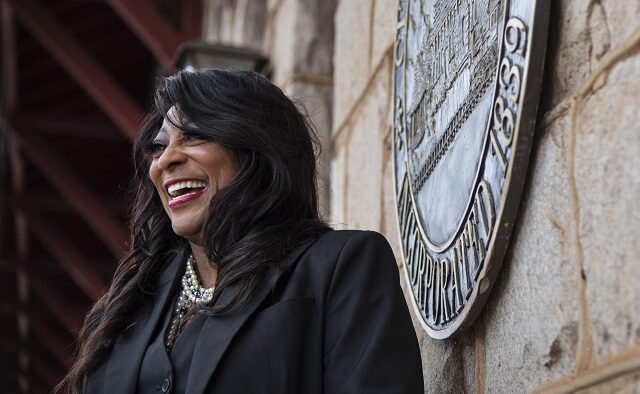 Dr. Beverly Jones was sworn in as the first Black female mayor of the city of Stone Mountain on Jan. 4, 2022. Stone Mountain incorporated as a city in 1839. Photo by Dean Hesse.
Share

Stone Mountain, GA — Stone Mountain Mayor Beverly Jones on April 21 voted in favor of extending the city’s local declaration of emergency, breaking a tie among the six members of the city council.

The vote to extend means the council will continue to meet virtually for another 30 days.

The city is one of the last two Dekalb cities (along with Stonecrest) to continue solely virtual meetings, according to an AJC report.

Mayor Jones said she would like to return to meeting in person, but was concerned about rising COVID rates.

“I was pretty much ready to go in,” said Jones, until she saw the rising rates over the past two days. “We do need to go in sooner than later.”

Jones said the city needs to use these 30 days to plan for returning to in-person meetings while still allowing people to tune in and participate virtually.

“People are still getting COVID, yes, but the death rate has decreased,” Jones said.

Councilmembers Gina Stroud Cox, Chakira Johnson, and Teresa Crowe voted against extending the declaration. That was effectively a vote for returning to meeting in person.

“Having hybrid accessibility is a must because if any one of us contracts the virus or any one of us is in a hot zone…..that’s a vote that’s lost,” said Freeman.

At the most recent council working session on Tuesday, councilmembers said they wanted to continue a hybrid format because they appreciated the increased citizen involvement virtual meetings allows.

The council’s next planned voting meeting is Tuesday, May 3.