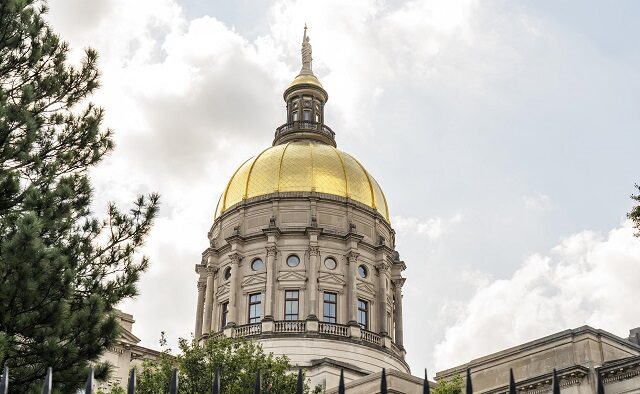 Atlanta, GA — Around midnight on Monday, the last day of the legislative session, the Georgia General Assembly passed a bill that would prevent the use of curricula or training programs which seek to promote or encourage certain divisive concepts. But added to that bill was the creation of an executive oversight committee that could prohibit transgender girl students from participating in girl’s sports.

State Rep. Will Wade (R-Dawsonville) brought the bill forward on the floor of the House of Representatives. During his presentation, he noted that the amendment creates an oversight committee, but did not mention that the 10-member committee’s responsibility includes determining whether “it is necessary and appropriate to prohibit students whose gender is male from participating in athletic events that are designated for students whose gender is female.”

The legislation, House Bill 1084, passed the House adopted its amendment with a 99-69 vote and agreed to the Senate substitute with a 98-71 vote.

“Mr. Speaker, is it not true that we should be clear about what we’re voting on in this bill, that the bill sponsor failed to mention that this bill now adds the transgender sports ban…and that passing this bill would be inconsistent with the theme of what we have adopted in the House this year,” Rep. Matthew Wilson (D-Brookhaven) said during the vote. “That is of promoting mental health for Georgians, that this bill targets the most vulnerable Georgians — transgender youth — that it sets us up not just to be on the wrong side of history and morality, but also on the wrong end of litigation.”

Wilson told the Georgia Recorder that the bill was placed on their desks about 15 minutes before the House voted on it. He quickly read the bill, noticed the language in it and started to alert his colleagues “because I knew that if you just skimmed the bill, you wouldn’t have seen it.”

Rep. Park Cannon (D-Atlanta) said it’s a shame that the bill only targets transition from male to female, and that transgender students deserve access to sports.

During the Senate floor session, Sen. Butch Miller (SD-49) asked for the chamber’s favorable consideration of the bill and did not explain the amendments that had passed the House. Senate Minority Leader Gloria Butler asked for the bill to be printed, and that motion failed. Sen. Elena Parent (SD-42) mentioned that the legislators didn’t have the bill before voting.

Miller also told the Georgia Recorder that both bills had been talked about throughout the session and legislators should have been familiar with it. He added that the bill is about saving girls’ sports.

The Senate agreed to the House amendment with a 32-21 vote.

“Isn’t it true that the anti-trans bill is attached to this bill that we have not had the favor of being able to even view,” Sen. Sally Harrell (SD-40) asked during the vote.

Harrell urged her fellow legislators to vote against an anti-transgender sports ban earlier in the session, and shared that she is the mother of a transgender child.

House Bill 1084, called the Protect Students First Act, also prevents the use of curricula or training programs which seek to promote or encourage certain divisive concepts. It defines divisive concepts as the following concepts:

– One race is inherently superior to another race;

– The United States of America is fundamentally racist;

–  An individual, by virtue of his or her race, is inherently or consciously racist or oppressive toward individuals of other races;

– An individual should be discriminated against or receive adverse treatment solely or partly because of his or her race;

–  An individual’s moral character is inherently determined by his or her race;

– An individual, solely by virtue of his or her race, bears individual responsibility for actions committed in the past by other individuals of the same race;

– An individual, solely by virtue of his or her race, should feel anguish, guilt, or any  other form of psychological distress;

– Performance-based advancement or the recognition and appreciation of character traits such as a hard work ethic are racist or have been advocated for by individuals of a particular race to oppress individuals of another race; or

– Any other form of race scapegoating or race stereotyping

The bill is similar to Senate Bill 377, which passed the Senate on March 11.

“We can teach U.S. history — the good, the bad and the ugly — without dividing children along racial lines,”  Miller previously said. “In order for our nation to survive and to prosper, we much teach patriotism, that America is good, though not perfect, but America is good. We secure our future by not indoctrinating grievance, but instilling skills through world-class instruction in language, math and science.”

The City Schools of Decatur School Board shared a letter on Feb. 10 detailing its opposition to HB 1084, SB 377 and two other bills that had been introduced in the legislature. The letter states the School Board “vehemently opposes” these four education bills.

“These bills threaten to harm students, cripple instruction, levy unfunded mandates, impede business, and undermine local control,” the letter states. “All of this would be in response to a ‘problem’ that doesn’t exist. Supporters might think this legislation would splash cold water on Critical Race Theory, but instead it would drown our ability to do basic schooling.”

The board warned that if enacted, these bills would harm students by limiting the schools’ ability to begin and sustain the work of addressing equity. The bills would scare educators into avoiding these subjects, or they could be accused of compelling a student or colleague’s belief or action.

“However, not having these discussions perpetuates harm to students who feel unseen, unheard, and unvalued,” the school board said in the letter. “These bills would deny those students the caring adult support to examine past and present actions that have marginalized them or people who share their background or experience.”

The school board further stated that these bills hinder local school boards’ control over classroom and staff policies that reflect community standards.

“These bills have dangerous, ill-conceived provisions that would harm students and set Georgia education on an embarrassingly retrograde path,” the School Board said. “The bills purport to address a non-existent problem, and districts already have local mechanisms to identify and resolve actual problems. City Schools of Decatur urges the House and Senate to give these ill-informed big-government intrusions the ‘F’ they deserve.”