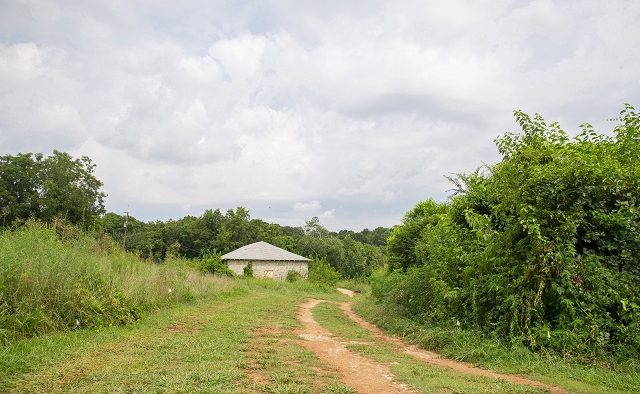 A view of Legacy Park on South Columbia Drive in the city of Decatur on August 17, 2020. The park occupies the former site of the United Methodist Children’s Home. Photo by Dean Hesse.
Share

Decatur, GA — Trees Atlanta is making progress on removing invasive plants at Legacy Park and has completed about 75% of its volunteer hours within the first six months of the invasive plant control program.

The Decatur City Commission approved a project budget of $650,000 for invasive plant control and woodland restoration at Legacy Park in August 2021. The city is working with Trees Atlanta to implement a five-year program to do remove the invasive plants.

The plan includes 130 volunteer events, with most taking place in the final two years of the project, and various opportunities for environmental education for the community, Deputy City Manager Hugh Saxon said at the Aug. 17, 2021 city commission meeting.

“It’s extremely green,” Saxon said. “Green with a lot of invasives that are seriously harming the trees and native materials on the property. Our objective is to save the trees and the native plants and restore to its best, functioning as a woodland.”

Most of the work will be done in the park’s 22-acre conservation easement and can be funded by a grant from DeKalb County of about $572,000. A total of $76,558 from the city’s capital improvements fund would be needed to pay for restoration activities outside the conservation easement, Saxon wrote in a memo. City staff recommended the city allocate $43,300 from the capital improvements fund.

To remove the invasive plants, Trees Atlanta and volunteers will uproot small shrubs and trees. If they are too large to uproot, Trees Atlanta will cut the trees and shrubs at ground level and treat with the stems with a highly concentrated herbicide that is approved for aquatic use, said Taryn Heidel, forest restoration manager at Trees Atlanta.

“That is usually 90-95% effective,” Heidel said at the April 18 city commission work session. “With the second year, you’re going to see some regrowth for some of those stumps and then also the seed bank erupting. In our plans, we have the majority of trees and shrubs cleaned up within the first year and then clean up work in the second. This is usually one of the first steps for us because it allows access into the site.”

Once that step is done, Trees Atlanta will move on to removing climbing vines and then do ground cover work. To remove climbing vines, they get cut in the dormant season and the vines will eventually fall from the trees. Large woody vines would be cut and treated with herbicide as well.

“We estimate that there’s around a 50% reduction in vigor and density of these plants each year,” Heidel said. “With kudzu and wisteria, we start early with those because we estimate that it takes around five years to get them to a nuisance level where it can be easily maintained.”

Currently, Trees Atlanta is hosting volunteer opportunities once a month, but will ramp up these opportunities in years four and five of the invasive plant removal program. Volunteers have been working to remove Japanese chaff flower, which has given Trees Atlanta a head start, Heidel said.

The first year of the program will end in September. By that time, Trees Atlanta expects to complete with initial woody invasive removal and remove the ivy on trees in all but one zone. The park is split into 12 zones that Trees Atlanta is working in.

Throughout the second year, the group will reduce ground layer evergreen vines in all areas, remove woody invasives in the last zone.

“We’ve already hit 540 volunteer hours in six months, so we’re really hoping to blow the lid off of that number and keep doing that,” Heidel said. “We’ve had the same folks come back again and again. We’ve had some high school folks who have been really interested. They started their own Ivy League removal club.”

Trees Atlanta planted 50 trees and shrubs at the park on April 1. This was not part of their contract with the city, but someone donated the funding for the trees.

All invasives, except for evergreen vines, will be reduced to low density levels in the third year and 12 volunteer opportunities will be held. Trees Atlanta will also do two tree plantings and plant a total of 300 trees.

Six-hundred more trees will be planted in year four and in the last year of the program, all invasive species will be targeted at low or negligible levels. Trees Atlanta will hold more frequent volunteer events and will plan for ongoing site management.

The next volunteer events will be held on Friday, April 22, and Saturday, May 14, from 9 a.m. to noon at Legacy Park. To learn more about these opportunities, click here.