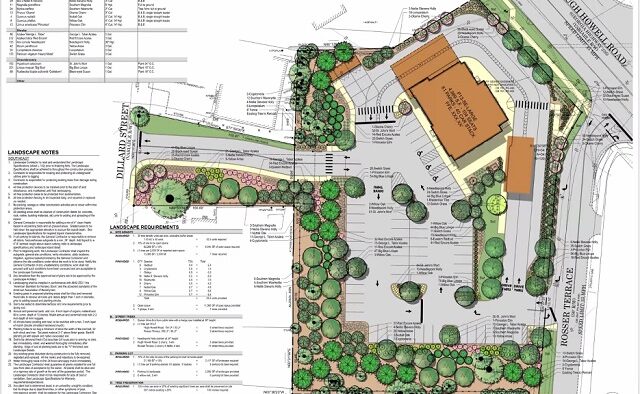 In response, the planning commission made an unprecedented move, voting 6-1 to defer the application for 60 days. Member Steve Smith voted no.

For almost a year, Chick-fil-A has been pushing a proposal to relocate the popular drive-thru from Hugh Howell Road at Lawrenceville Highway to Hugh Howell at Rosser Terrace. Rosser Terrace residents have been fighting Chick-fil-A’s plan, saying their street, a congested cut-thru devoid of sidewalks, would suffer even more with additional traffic.

Chick-fil-A’s latest plan runs traffic from Rosser Terrace on the east side of the proposed building to Dillard Street on the west side.

Engineer Bridgette Ganter said, “As far as all of these traffic concerns, our main focus is to make the neighbors happier with the situation so that we are preventing as much traffic as possible from being on Rosser Terrace.”

In doing so, the fast-food giant doubled its opposition.

Resident Kristen Jenkins said Chick-fil-A’s plan has been presented as a strangely shaped lot, but the lot is not appropriate for a drive-thru.

“It has been zoned appropriately versus needing to be SLUPed. Permitting a land use variance for a drive-thru would be an inappropriate use for the lot, and why codes have been implemented to provide for our community,” said Jenkins.

Andy Wood has attended all the meetings on Chick-fil-A’s application.

“As you can see, when they first started it impacted 43 homes. Now add in Dillard and they’re impacting 180 homes. It’s a significant add to our neighborhood, traffic wise, on both Rosser Terrace and Dillard. Please take that into consideration when you look at these SLUPs and please vote no on those,” said Wood.

The city is legally bound to notify residents within 500 feet of a property that is under consideration for rezoning.

Dillard Street residents who live in a townhome community 900 feet from the proposed location said they were never notified of the change by the city. Instead, they learned about it from Rosser Terrace residents.

Nicole Basden said she was unable to exit Dillard Street last week while her son was having an emergency because of traffic.

“The council doesn’t live here. The mayor doesn’t live here. Not one person from Chick-fil-A lives in Dillard Crossing. But I do, and I matter, and my son matters, and every resident in this place should have something to say about what’s going on up the street,” said Basden. “No one cared that Dillard Crossing was back here; 168 homes with at least two cars at every home, and no one gave any type of consideration of how we will be impacted. But people care about us when it’s time to vote. People care about us when we’re paying tax money to whatever project is going to beautify downtown Tucker.”

A revised traffic study is underway and will be complete in a week, said city staff.

– Embry Development Company is proposing to rezone five parcels on Lawrenceville Highway to build a two-part residential development. At the public participation meeting in February, 50 attendees were in opposition of the proposal.

Lawrenceville South is located at 3207, 3217, 3227 and 3259 Lawrenceville Highway and 3563 Bishop Drive. Emby is seeking a rezoning of this land from R75 (residential) to RSM (small lot residential mix) for 52 townhomes, a dog park and greenspace.

Residents in the area previously fought off development in this location. The planning commission recommended denial of the application in December 2017 with a 4-1 vote, followed by city council voting 5-2 to deny the application in April 2018.

Debbie Naber, who lives on an adjacent street, said water comes into her yard with heavy rains. If the townhomes are built, she said the street will create a jetty.

“We’re going to look like an extension of Decatur,” said Naber. “This is going to consume the street. It’s going to be massive. It’s not going to look anything like the other three adjoining neighborhoods from that street.”

“The developer argued in the past on several occasions that people need affordable places to live in Tucker. To this, I would point to the newly built Reed Apartments, the proposed GrayCo apartments by Doubletree and some other 1,000 units in the pipeline. We don’t need any more affordable units, so we don’t need to rezone this for townhouses,” said Hall.

The planning commission voted 7-0 to recommend the development to City Council. The application is scheduled for a first read at City Council on May 9.